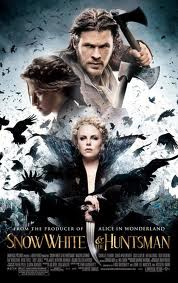 Many forget that fairy tales originated in Germany by the Brothers Grimm and were usually dark and twisted. While Disney's 1937 animated classic "Snow White and the Seven Dwarfs" brightened the darker elements, more revisionist takes on the tale have harkened back to its darkly themed roots, namely 1997's TV version "Snow White: A Tale of Terror." This year alone has already seen "Mirror Mirror," a jokier, more light-footed overhaul, but the second and latest is the grim, comparatively humorless one. Portentous and deadly serious in tone, "Snow White and the Huntsman" is more of a mud-and-grit fantasy-action epic that will scare away the children and give the adults a more-than-fair re-imagining.

With lips red as blood, hair black as night, and skin white as snow, Snow White (Kristen Stewart) grew up under the thumb of her evil stepmother Ravenna (Charlize Theron), who married Snow's father, murdered him in their wedding bed, and took over the kingdom as Queen. Now, she's imprisoned in the North Tower by the sorceress and her creepily devoted brother Finn (Sam Spruell), until the Queen realizes that in order to remain eternally youthful, there can't be a "fairer blood." So after Snow escapes through a sewer that leads to jumping into the sea and entering the Dark Forest, Ravenna (whose powers are useless in the woods) recruits a huntsman to kill Snow and bring back her heart. The Huntsman (Chris Hemsworth) is a drunken widower who agrees to the deal when promised by the Queen that she'll bring his wife back, but Ravenna isn't that sweet. The rest follows a generally familiar trajectory.

Commercial director Rupert Sanders makes his debut here, mounting a sumptuous visual feast first and a fairy-tale retelling second. Dominic Watkins' production design, Colleen Atwood's costumes, the crew's art direction, and the make-up are all top-notch, supported by Greig Fraser's (2010's "Let Me In") atmospheric cinematography. The Dark Forest is also a creepy, genuinely menacing land of twisted trees. It's populated by Reaper-like shadows, creepy-crawly beetles, a pit of maggoty birds, spores that release hallucinatory gas, and tree branches that morph into slithering snakes. The forest's darkness is then contrasted with the Sanctuary, a lush, grass- and moss-covered home of fairies, mushrooms with eyes, and a white stag. Even the CG visual effects, including that of a tree-size troll, are convincing.

Though visually arresting, and slick and stylish, "Snow White and the Huntsman" is not just a soulless, overblown piece of product but a splendid eyeful. Many of the images are inspired and startlingly beautiful, especially involving the Queen: Ravenna's mirror is a golden bowl that melts into a hooded figure; she disrobes and steps into a milk bath that sticks to her like Elmer's Glue; and later, when returning to her castle as a murder of crows, she appears to be crawling out of an oil slick. Some of the medieval battle sequences are executed in the style of the "Lord of the Rings" trilogy and Ridley Scott's "Robin Hood," but an excitingly intense set-piece in the Queen's castle is much more impressive, black shards of glass regenerating her minions that viciously attack the Huntsman and his men.

Kristen Stewart, the moody "Twilight" alumnus, seems miscast, as she's certainly not fairer than Charlize Theron's Evil Queen. She's not the most expressive or engaging performer of her generation either. With that said, she blessedly leaves a majority of her angsty tics back in Forks, Washington, and makes for a fiercely independent Snow with a touch of Joan of Arc and "The One" that can break the darkness. Like Tarsem's "Mirror Mirror," it's refreshing to see Snow White leading a revolution as a warrior princess rather than being a damsel in distress, waiting at a well for her Prince Charming. As the Huntsman, Chris Hemsworth (putting down his Thor hammer to carry swords and hatchets) conveys grief and a brutish swagger, while putting his comic timing to use. Unfortunately, as Snow's childhood playmate William, Sam Claflin is mostly a bland third wheel. There are eight dwarves, not seven, and they may not whistle while they work, but add welcome flashes of comic relief. In a neat trick of digital trickery, a notable compilation of British character actors, including Ian McShane, Bob Hoskins, Ray Winstone, Nick Frost, Eddie Marsan, and Toby Jones, are seamlessly shrunken down to little-people size.

Getting all the attention is the statuesque Charlize Theron, who's frosty and deliciously menacing as she digs into the role of the literally soul-sucking Ravenna. At times, she does teeter on screechy camp like a Step-Mommie Dearest that you expect her to scream "No wire hangers ever!" any minute. But Theron is interesting as an actress that when she's not chewing the scenery like it's someone's face, she's intimidating with her beauty and piercing eyes alone. Just watch as she plucks her talon-like nails into the heart of a bird and tastes it or sits in misery with her ribs showing through her back. From a short feminist monologue of her feelings on men and a quick flashback to her childhood, Theron adds dimension as a jealous, insecure monster.

As it puts the grim back in Brothers Grimm, "Snow White and the Huntsman" certainly gets dark without getting too deep. Evan Daugherty's screen story (he co-wrote the script with John Lee Hancock and Hossein Amini) doesn't really commit to making the Huntsman (half of the film's title, mind you) or William as Snow's love interests. Even if one of them breaks the spell of the Queen's poisoned apple with a kiss, both romances can't light a match. Then again, praise the Lord this isn't just another post-"Twilight" love triangle. Warts and all—the pacing also grows a bit ponderous in the middle—"Snow White and the Huntsman" is a weighty endeavor that should have audiences re-analyzing the fairy tale for its darkly themed roots. And if not, it's still entertaining to soak up all the imagery and watch Charlize Theron take her dairy bath.