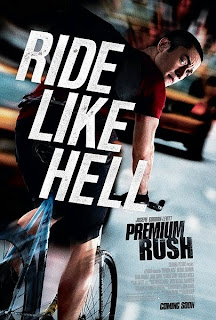 Now this is more like it — a little under-the-radar diversion that almost sped away before the dawn of fall. "Premium Rush," a kinetic, breakneck end-of-the-summer ride, gets down to the brass tacks and shows us a fun time. Screenwriter and director David Koepp (2008's "Ghost Town"), who's long been the high-profile scribe for summer fare, expertly delivers a 91-minute-long chase on a bike without wearing out its welcome. Obviously, it's not challenging, but exhilarating, and how!

Being a bike messenger looks like a hell of a job, especially in treacherous New York City, but Wilee (Joseph Gordon-Levitt) is a daredevil that just wants to ride. Giving up his potential as a law graduate, he can't be in a suit or sit behind an office desk; that's just not him. Delivering packages on time from a courier security office, Wilee is the only one to ride without brakes or gears, while his on-again, off-again girlfriend, fellow messenger Vanessa (Dania Ramirez), and his spandex-clad foe, Manny (Wole Parks), take the safer two-wheeled model. Things get hairier than usual when the bike champion picks up a premium rush package from Vanessa's roommate, Nima (Jamie Chung), at NYU that must be delivered to Chinatown by 7 p.m. Before getting the chance to inhale his burrito log, Wilee is accosted by Bobby Monday (Michael Shannon). Monday, a crooked NYPD cop with impulse-control issues, desperately wants that envelope back, so he can clear his gambling debts, but Wilee isn't about to slow down.

From the word go, Koepp gooses his sleek visual style with zippy but nimble speed, all while keeping our attention to the geography of Manhattan, with satellite photos and a Google Earth-type map that trace the biker's route. Just watching Wilee dodge and weave on two wheels through rush hour traffic and tight spaces is a thrill in itself. Koepp treats us to being part of the high-speed chase, varying his shots with coherence and never resorting to shaky-cam syndrome. There's also a nifty visual trick (recalling "Run Lola Run" and the "Sherlock Holmes" movies), where Wilee gets a split-second vision of every possible what-if? scenario at a busy intersection (he can either go this way and collide with a woman and a baby stroller, or go that way and fly over the hood of a car).

With a literal ticking clock accentuating the rush, "Premium Rush" can't be faulted for not moving forward with fast-pedaling momentum. However, as Koepp and John Kamps' screenplay employs a time-flipping shorthand with hour-earlier rewinds to explain why that ticket is such a hot commodity and how other characters are connected to Wilee's pickup, the movie too often slams on the brakes for exposition. The envelope could have just remained a MacGuffin, not a desperate device for emotional stakes, because it hardly matters. Still, the storytelling is bare-bones and economical enough to avoid many kinks in the always-turning wheel (last pun, I swear). The movie also touches on the close-knit community of bike messengers and the dynamic between them and cops, drivers, and pedestrians, but this is hardly a documentary.

Gordon-Levitt always commits and seems to be doing most of his own perilous stunts (seen in the credits, he even crashed into the back windshield of a taxicab and received 31 stitches) when his stunt double isn't seamlessly standing in. Though the character of Wilee is less layered than what usually calls for the reliable actor's talents, he does a lot with a little. When Wilee could have come off as a cocky jerk, Gordon-Levitt makes him likable, charismatic, and sympathetic. On the showier side, character actor Shannon deliciously chews the scenery like it's bubblegum. Adding some off-kilter humor, he gets to bulge his eyes like a lunatic and make Monday as despicable as a cartoon villain, who's chasing Wilee (as in Wile E. Coyote), should be. Also, Ramirez is plucky and shares a nice chemistry with her male co-star; Aasif Mandvi adds smartass humor as the couriers' boss; and Chung, who sports a suspect Chinese accent, still puts in a sensitive, empathetic performance.

There might not be much substance to take away from the whole experience, but "Premium Rush" doesn't really need it. It's a dizzying, no-frills popcorn movie, and a good, satisfying one, that fulfills exactly what it promises. No need for a 5-hour Energy drink during this one.