DVD/Blu-ray: "Detention" a fun, energetic original, plus a look back at gleefully dumb "Torque"

Had John Hughes chugged a Red Bull, snorted Pop Rocks, made a bubblegum-pop slasher pic in the mold of his 1980s teen comedies, and thrown time-traveling and body-swapping into the mix, it might look something like the wildly genre-smashing "Detention." Music videos being his forte, co-writer and director Joseph Kahn (after steering 2004's awesomely fun, gleefully stupid biker-actioner "Torque" with efficiency) almost one-ups "Juno" and "Scott Pilgrim vs. the World" with this fizzy, consistently original, relentlessly fun blast, which is as useless to categorize as "Donnie Darko." Kahn and co-writer Mark Palermo go for broke, their arsenal spitballing out everything but the kitchen sink into a meta, apocalyptic sci-fi/horror/teen comedy concoction. 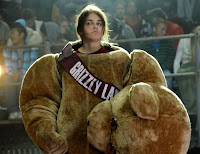 "Detention" is set in Grizzly Lake, a town where no one has been anywhere else, so it wouldn't really matter if the world ended. Shanley Caswell plays Riley, a feminist, vegetarian-preaching misfit, biting into a burger every chance she gets after losing a debate to a Canadian and hobbling through life with one leg in a heavy cast. She has a crush on her friend, Clapton Davis (Josh Hutcherson), the cool kid who skateboards down the halls with a neon fanny pack, but he's dating '90s-reference-dropping cheerleader Ione (Spencer Locke). There's also Riley's Duckie-like acquaintance Sander Sanderson (Aaron David Johnson), beefed-up bully Billy Nolan (Parker Bagley), and the high school's hardheaded Principal Verge (Dane Cook).

Oh, and yes, there's a serial killer based on the latest horror movie franchise, "Cinderhella," killing teenagers that are too cool for school, starting with queen bitch Taylor Fisher (Alison Woods). In one of the film's most slyly amusing send-ups of horror movies (particularly "Saw"), Cinderhella—a grotesque cross between Lady Gaga and Leatherface—plants a glass slipper in the stomach of a prom queen. But that there's a killer on the loose is almost incidental. "Detention" also finds time for plot points not unlike "Three O'Clock High" (there's a bully with mutant fly blood), a "Freaky Friday" swap between mother and daughter, and a time-traveling stuffed bear. As a narrative, it's pretty incoherent, but who cares when there's a talking alt-rock band poster, Jean-Luc Godard-ian intertitles, smash cuts, on-screen text messages, a self-aware knock at Kahn's own "Torque," a rip on "Scream's" Neve Campbell, an intricate movie-in-a-movie-in-a-movie sequence, TV references to "Perfect Strangers" and "My So-Called Life," and '90s hits like Hanson's "MMMBop."

Just in the first minute, the film establishes its snarky voice, hyperactive pacing, and sensory overload of razzle-dazzle. Queen bitch Taylor Fisher (Alison Woods) is victim #1, breaking the fourth wall and telling us that anyone that's anyone will be seeing the new "Cinderhella" sequel. From then on, it moves at the frenetic speed of a pinball, leaving slow-pokes in the dust and requiring multiple viewings just to catch all the stuffing and every witty line, joke, and reference. Even when "Detention" is busy having cleverly impish, self-referential humor explode out of its ears and commenting on cultural trends, Kahn knows how to stage the slasher-horror elements. The opening dispatch of the self-proclaimed bitch has a cool shot out of her window, and an attack in Riley's bedroom, extending into a neighbor's yard, is surprisingly tense. Whether it's all fun or exhausting, one should be able to make up their mind almost immediately.

If the writing weren't already up to Aaron Sorkin and Diablo Cody's standards, it wouldn't matter that the ensemble brings colorful personality to the project, but they do. Already a clear talent, Hutcherson (who also serves as executive producer) is totally charismatic and appealing as the ultra-cool, skateboarding Clapton Davis. There's no reason Caswell couldn't break out after this. As heroine Riley, she's hugely likable and funny in her own right, and with co-star Hutcherson, they make a sweet couple. Locke plays her part of cheerleader Ione to the hilt, over-the-top and hilariously blasting off one-liners like she's at home with the film's overall tone and rapid rhythm.

It's hard to see anyone feeling neutral about "Detention," but it'd be no surprise if it became a cult hit in a heartbeat. If it seems pleased with its own hipsterism, there's still nothing else like it.

The bad news about "Torque" is that it's seemingly a testosterone-heavy hybrid of the "Fast and the Furious" movies and "Biker Boyz." The good news is that this swifter, sexier biker actioner doesn't even come close to taking itself seriously. Even when it's being dumb, it knows it. Music-video director Joseph Kahn makes his feature debut, working from a script by fellow newcomer Matt Johnson, keeps the crotch-rocket action ample and the pace lean. It's unpretentious, empty-calore fun that's better than it has to be and worth consuming for an hour and a half.

Of course, there needs to be a story, and it works as a structure to set up all the bike action. After spending months running the roads in Thailand to evade a drug charge, Ford (Martin Henderson) returns to his California stomping ground to settle the score with Hellion gang leader Henry (Matt Schulze) and re-woo his estranged girlfriend, Shane (Monet Mazur), a lip-glossed grease monkey that owns her own bike-maintenance shop. Then, almost immediately, when Henry comes asking Ford for the drugs, he murders Junior (Fredro Starr), a member of Inglewood motorcycle gang The Reapers, and pins it on Ford. Junior's brother Trey (Ice Cube), also the leader of The Reapers, isn't too happy when the evidence points to Ford. Meanwhile, not only does Ford have the Hellions and Reapers on his trail, FBI agent McPherson is out to put the renegade biker behind bars. And let the races begin!

The performances are energetic enough to not become insipid, and though far from witty, the dialogue is uttered with enough self-aware humor that it seems intentional. For characters, the guys drive fast, and all the women are hot and scantily clad (or their thongs just hang out). As white-boy biker Ford, Martin Henderson has enough charisma and machismo that it's surprising he's not already a Kurt Russell-type star. Ice Cube slaps a scowl on his face, which is always crinkled. Jaime Pressly, as Henry's bad-girl moll China, is almost unrecognizable in slinky, all-black punk leather, but sneers and licks her lips like the best of 'em. Jay Hernandez and Will Yun Lee also provide goofy support as Ford's hog-riding buddies.

Though no cuts last longer than 5 seconds, computer enhancement is obviously integrated into the live action, and the high-decibel sound will make your ears nearly bleed, the stunt action is fast, cleanly shot, and awesomely exciting (kudos to cinematographer Peter Levy). Each set-piece is staged with so much delirious style and larger-than-life preposterousness that it's easy succumbing to enjoy the ride. At the halfway mark, there's an insane chase on top and inside of a speeding train, and then later, there's a kick-ass catfight between Shane and China on bikes, which could also stand for a stand-off between Pepsi and Mountain Dew. Finally, our protagonist and antagonist chase one another through the streets of Los Angeles, and they accelerate at such cartoonishly high speeds, the skin on their faces nearly falls off. "Torque" might not be full of brains or realism, but it's smart enough to be cheeky and keep up the adrenaline level.