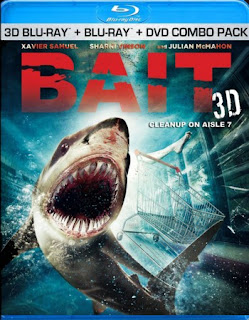 When a killer shark thriller comes along, one is immediately reminded of "Jaws," a brilliant example of character writing, building of suspense, and everything in between that makes an unforgettable cinematic experience. "Bait" is no "Jaws." Heck, it's not even as fun as "Deep Blue Sea" or "Shark Night 3-D," and definitely not "Piranha 3D" (or "Piranha 3DD"), but it's more unfulfilled potential than truly bad. Didn't the uproarious "Shark Pool" faux trailer that went viral already send up this subgenre?

Throw "Deep Blue Sea," "Poseidon," and "The Mist" into a pool of ideas (six screenwriters' worth of ideas), and you know the premise. In Queensland, Australia, lifeguard Josh (Xavier Samuel) suffers the loss of his best friend to one 12-foot great white shark, which then results in the breakup with his fiancee Tina (Sharni Vinson), the friend's sister. Twelve months later, he's working a thankless job at the Oceania grocery store and comes across Tina with another man. Adding more pressure, there's a stick-up in the grocery store by Doyle (Julian McMahon), just when a tsunami washes ashore and floods the store and its underground car park. With the corpses floating through the submerged store, the survivors have to contend with other living things that have fins and skin-breaking teeth.

Among the bland survivors are a shoplifting bad girl (Phoebe Tonkin) and her cop father (Martin Sacks). Meanwhile, the shoplifter's store employee boyfriend, Ryan (Alex Russell), is stuck in the submerged parking garage, along with Douchebag (Lincoln Lewis) and Blondie With Yippy Pomeranian (Cariba Heine), who are trapped in their car and act like such vapid Hollister models, arguing about $300 Gouchi shoes, that they can't become chow fast enough. The cast is perfectly good-looking (would the casting directors of this type of movie ever dream of signing on less attractive actors?). The only real standouts are Samuel, a suitable young hero, and McMahon, who's solid as the bad guy turned good. Though he hangs onto his Aussie accent here, it's a shame Russell (who was so charismatic in "Chronicle") has so little personality here.

And there you have it — 'Sharks in a Grocery Store'! That silly gimmick alone sounds tempting enough for a turn-off-your-brain B-movie blast on paper, as it calls back the absurdity of "Snakes on a Plane," a superior popcorn entertainment, but director Kimble Rendall (of the 2000 Molly Ringwald-starring horror film "Cut") seems less interested in fun. The in-tight-quarters setting is ripe for a tense chamber piece/survival thriller, but the execution is unevenly paced and only occasionally suspenseful.

By the time someone says, "We're not gonna just sit around and wait for that thing to pick us off one by one," we want to shout back, "Uh, yes you are!" Characters spend most of the time standing on shelves, or cars, figuring out ways to escape or bait the sharks. The rest of the time, characters have close calls when falling into the water and the goners are just pulled underwater, only leaving bubbles of red dye. (Exception: there is an amusing bit where a character is struggling to get back up to safety, while another holds his hand, and after he's attacked, his head slowly floats away.) Or, we'll see the CG sharks chewing on limbs, but the chomp-chomp gore is never really played for tongue-in-cheek laughs.

Just before a nifty rock cover of "Mack the Knife" plays over the end credits, the very last shot rips off, of all things, the very last last shot of last year's "Shark Night 3D." It was more unexpected the first time around. Of course, this is more technically well-made than any so-bad-it's-good original movie airing on Syfy, but it's a little less fun. "Bait" (being theatrically released in 3D) is watchable enough for its limited use during a lazy Sunday afternoon. Otherwise, the 100th anniversary of "Jaws" is now available on Blu-ray.