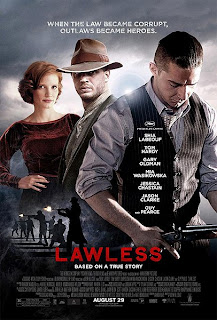 Setting the tone for "Lawless" are Australian director John Hillcoat's previous works, 2009's oppressively bleak but potently compelling post-apocalyptic drama "The Road" and 2005's unflinchingly brutal western "The Proposition." Reteaming Hillcoat with screenwriter-musician Nick Cave (who scripted "The Proposition"), "Lawless" isn't nearly the drear trudge that those films were or as great as it could and should have been. And yet, it is still a vibrantly bloody, entertaining, and consistently involving gangster epic with a wickedly dark sense of humor and a bruised heart. It feels like a classic western of yesteryear made new again.

Based on a true Depression-era story and adapted by Cave from Matt Bondurant's novel "The Wettest County in the World," the film follows the lives of the author's grandfather and great uncles in Franklin County, Virginia, 1931. With Prohibition coming to an end, the three Bondurant brothers—Jack (Shia LaBeouf), Forrest (Tom Hardy), and Howard (Jason Clarke)—are bootleggers, running a lucrative moonshine business and defending their turf. They're all considered immortal. "It's not the violence that sets men apart. It's the distance that he's prepared to go," hard-boiled middle brother Forrest tells Jack, the youngest who drives his other brothers around to sell their product. Having survived the Spanish flu, the seemingly invincible Forrest assumes the father figure of the family and uses their bar-and-grill Blackwater Station as a front for their moonshine trade. He thinks Jack has no grit, but being a fan of infamous gangsters, Jack gets to witness Floyd Banner (Gary Oldman) shooting up a car in town and becomes an ambitious hustler when he decides to deal with the monstrous Banner without his brothers. Then, to make matters worse, sneering, corrupt Special Deputy Charlie Rakes (Guy Pearce) from Chicago comes into their neck of the woods to threaten the boys' livelihood.

By the demands of a near-two-hour movie, adapting Bondurant's novel calls on the daunting task for Cave to cram the narrative with enough characters for a miniseries. Bordering on lack of focus but pulling it off, the story puts the Bondurant brothers first. We believe they're as immortal as legend has it (one character's near-death situation proves this), and we believe that any of them would do anything for family. If the film has any issues, they can be found in Cave's uneven writing. Chunks of time seem to be missing that would have made the character beats and transitions a bit stronger. At one point, we get a montage of events that's supposed to take care of that, but it's too rushed when a more gradual development would have been desired. Also, notorious outlaw Floyd Banner is inscrutably dropped from the narrative, which equally wastes the opportunity of having Oldman and Hardy in the same frame. However, no need to fret because Oldman plays Banner with such gleeful brio that he casts a lasting impression, despite his role amounting to less than an extended cameo.

That said, the script is still strong enough or else its performances wouldn't be as rich and juicy as they are. After all, the actors are working from what's on the page. For a change, LaBeouf holds his own against some heavy-hitting actors (and they're not transforming robots). The young actor has never been given enough credit, but here, LaBeouf's detractors can silence themselves as he takes Jack's naivete and arrogance into compelling directions. Last seen on screen in this summer's "The Dark Knight Rises" as villain Bane but hidden behind a face-hugging toilet, Hardy shows his face and gets his animalistic grunts and growls in, along with long death stares. It would sound like a superficial performance, but so full of intensity, he's quietly commanding and brutishly intimidating. Forrest does not let anyone slide if they threaten his family. Clarke is the least drawn as eldest brother Howard (it's possible his scenes were left on the cutting room floor for tightening purposes), but he registers a balance between his two brothers.

As the dandy of a bad guy, Pearce is as deliciously oily as his slicked-down hair and a lot of nasty, snaky fun, sporting shaved eyebrows and an assortment of gloves to get blood on. He's detestable and menacing without being a complete cartoon. Dane DeHaan, who was so outstanding in "Chronicle," proves his versatility and presence as an interesting actor playing Jack's crippled savant buddy Cricket Pate. In the middle are two females, Maggie (Jessica Chastain) and Bertha (Mia Wasikowska). Chastain is instantly spellbinding, her red lipstick and fair complexion never more luminous. A sultry former dancer, Maggie left the big city for a quieter life and gets the job at Blackwater Station; Chastain layers Maggie with feistiness and a hidden heartbreak. As the preacher's daughter Bertha, Wasikowska convincingly creates an individual chained by her father's beliefs but with a rebellious side dying to get out. Each of their romances with Forrest and Jack, respectively, are secondary to the plot proper but don't feel shoehorned in either.

A peerless production, the film is armed with most of Hillcoat's frequent collaborators, including but not limited to Chris Kennedy's delicious production design that evokes the specificity and grittiness of the time and place; Margot Wilson's textured costume design; and Benoît Delhomme's gorgeously picturesque and dusty cinematography. The music score by writer Cave and Warren Ellis also combines jaunty bluegrass tunes with a hint of menace, while employing anachronistic but period-appropriate covers of the Velvet Underground's "White Light/White Heat."

Gushing with blood and crackling with dread, the film never shies away from visceral jolts of grim, brutal violence. No one is safe, not even its lawbreaking protagonists, who on a few occasions are within an inch of their life. And as unblinking and vivid as the violence can be, there is a rape scene that is suggested rather than exploited, concentrating on the emotional aftereffects. Things indelibly culminate to an explosive climax, leading to the shadowy center of a covered bridge, between the lawbreakers and lawmen. As much as a film like "Lawless" can have one, there is a happy ending that almost seems a little safe when taking into account what these characters have already suffered. While it doesn't pack the punch that it could have, the film's cold-bloodedness turns warm and cathartic. Arriving late in the dog days of August, "Lawless" deserves more attention and has too much going for it to possibly get lost in the shuffle.