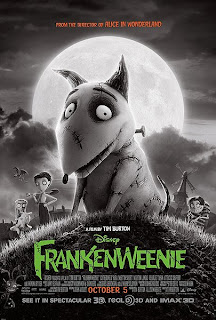 It might sound like an old saw, especially for the following filmmaker, but Tim Burton has really and truly returned to his boy-with-a-video-camera roots with "Frankenweenie." Retaining the black-and-white form but now rendering in stop-motion animation (and naturally, 3D), the director lovingly remakes his 1984 live-action short, itself an homage to James Whale's Frankenstein pictures of the 1930s, and gives it the feature-length treatment. Ironically, Burton got his labor of love backed by Disney, who fired him for his short (which the studio didn't know what to think of) and it saw a delayed home video release in 1994. Now, the new and slightly improved "Frankenweenie" is alive!

Creative but friendless, young Victor Frankenstein (sweetly voiced by Charlie Tahan) spends every minute with his bull terrier, Sparky. He loves him so much that after man's best friend chases a baseball into the street and gets hit by a car, a positively crushed Victor uses the science of electricity, inspired by his Eastern European, Vincent Price-like teacher Mr. Rzykruski (Martin Landau), to reanimate Sparky. He's a little stitched-up (and his wagging tail tends to fly off) but still good 'ol Sparky. Victor keeps him hidden in the attic from his parents (Catherine O'Hara and Martin Short, who both fill in two other vocal roles each) and the folk of New Holland, but once Sparky escapes to chase a cat, a classmate happens to discover Victor's dead dog is back from the grave.

Those that have seen "Corpse Bride" can attest to the obvious fact that Burton doesn't shy away from themes of loss and death, animated, PG-rated film or not. Only this eccentric artist of the dark and weirdly humorous could get away with the cockeyed monkey's-paw message that basically says, "Hey kids, it's okay if your pet dies. Just bring it back to life!" In padding an economical short to feature-length, the seams show a bit in John August's screenplay. The just-a-boy-and-his-dog story is already slim as is, but when the focus deviates from Victor and Sparky to Victor's mad-scientist-wannabe classmates competing to win the science fair by digging up their dead pets and trying the same reanimation method, it gets a little less affecting. However, in the long run, it's never less than a fun treat to watch a ghoulish array of hybrid monsters, including "Gremlins"-like sea monkeys, a Godzilla/Gamera-like turtle, and a cat-bat, running amok.

And the animation… Oh, the exquisite, slickly beautiful animation! Inventively designed with handmade care by frequent Burton colleague Rick Heinrichs, every character is Burton-esque and wonderfully strange in the most exaggerated and detailed of ways, varying from ping-pong-ball eyes to sticks for legs to round bodies, flat-topped heads, and long, rectangular faces. (If humans were as uniformly disproportionate and grotesque as these characters, no one would be self-conscious or suffer from body image issues.) Burton also brings on his right-hand man, Danny Elfman, to compose another evocative score that tracks both childhood trauma and gothic-horror mayhem.

If the 1984 short was Burton's version of "Frankenstein," this 87-minute expansion has even more nods to Mary Shelley's story, as well as other monster movies and the director's own films. For one, a dead turtle is called "Shelley." The climax, which has the town mob chasing Sparky down the suburban streets to the windmill on a hill, is a visual cue to the Universal horror staple, as well as Burton's own "Edward Scissorhands." One stout, hunch-backed, three-toothed character named Edgar 'E' Gore (voiced by "The Middle's" Atticus Shaffer) is practically Igor. Also, Winona Ryder provides the voice of oddball girl-next-door Elsa Van Helsing, whose hairdo is reminiscent of her character, Lydia Deetz, from "Beetlejuice." More knowing references can be discovered on the viewer's own experience.

When Burton puts out a new film, people listen, but after the one-two punch of the visually on-point but emotionally hollow and not-zonky-enough "Alice in Wonderland" and this year's admittedly underrated "Dark Shadows," some have given up on him. With his latest creation, naysayers can bite their tongues. What with "ParaNorman" and "Hotel Transylvania" released to theaters in the last two months, it's been no slim pickings for Halloween-ready animated fare. Notwithstanding being a pinch less perfect than "ParaNorman," "Frankenweenie" is a more-than-welcome return to form (or reanimation) for the mad scientist himself. Creepy, amusingly macabre, and mostly moving, it feels like a compilation of Burton's Greatest Hits in one movie, bringing along a who's who of actors (exception: Johnny Depp) from his early days as well. And best of all, it might be his most personal since "Big Fish."