Capably well-acted "Nobody Walks" too underwritten to care 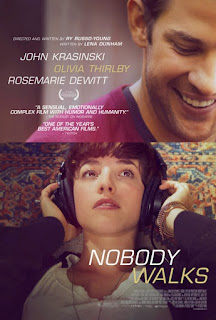 Nicely shot and capably well-acted, "Nobody Walks" feels like the kind of mumblecore pic that might've been made over a long weekend, and that wouldn't be a knock if it didn't feel so contrived and underwritten. Writer-director Ry Russo-Young, co-writing the script with indie auteur Lena Dunham, manage not to judge their characters but can't find a way to make them more interesting or their motivations clear.

When we first see Martine (Olivia Thirlby), she's just landed in Los Angeles, accepting a ride from a guy she met on the flight. He tries getting into her pants, but she cuts it short and gets dropped off at her destination: the home and work space of married sound engineer Peter (John Krasinski). Martine is a 23-year-old experimental filmmaker from New York who's being assisted by Peter on the sound of her little film on insects and is staying in the pool house. Meanwhile, Peter's wife, Julie (Rosemarie DeWitt), is a psychologist who listens to one of her patients (Justin Kirk) describe his sexual dream about her, and Julie's 16-year-old daughter from her previous marriage, Kolt (India Ennenga), pines after her step-father's hunky assistant, David (Rhys Wakefield), who has eyes for Martine; ignores the advances of a nerdy classmate (Sam Lerner); and faces flirtations from her smarmy Italian tutor (Emanuele Secci). Will Martine shake up the funky, earthy household?

"Nobody Walks"? More appropriate titles would have been "Everybody Screws" or "Nothing Happens." The story doesn't achieve any fresh territory (see any of Lisa Cholodenko's films, which are superior), but Russo-Young is attuned to the sights and sounds of what goes into making an experimental film, along with a melancholy soundtrack by Fall On Your Sword. In fact, the scenes with Martine and Peter trying out different sounds in his house are the freshest parts in the film. A young actress fully capable of her on-screen craft, Thirlby is fine, sporting a pixie cut, and Krasinski keeps proving that he's more than just a TV actor, but Martine and Peter are mostly ciphers. She leads on every man she meets (aside from Julie's ex-husband Leroy, played by Dylan McDermott), but then acts like she didn't ask for each sexual come-on, so it's hard to feel her out as a character. He falls into this spider woman's trap, even though it seems he and Julie have a healthy relationship, so we never really believe or understand why Peter would give it all up for the outwardly attractive Martine. Well played by DeWitt (who just played the half-sister of Krasinski's real-life wife Emily Blunt in "Your Sister's Sister"), Julie makes more sense; she sees that there's something between Peter and Martine, and almost gives in to her sensual patient but doesn't because that would be a breach between psychologist and patient.

All around, the actors throw themselves into the material, but it's in the service of a pretty inconsequential, shrug-worthy drama. It doesn't hurt to have Dunham in Russo-Young's corner, except that her latest script seems to be missing the smarts, charm, insight, and wit of the talented writer's "Tiny Furniture" and her popular HBO series "Girls." What exactly are we supposed to take away from it all? That a gamine East Coast houseguest is the catalyst for a West Coast family falling apart? "Nobody Walks" might've made for an intimate and emotionally complex character study, but mistaking sexual tension for character development, it's too short and too thinly drawn to really care what happens to these people.