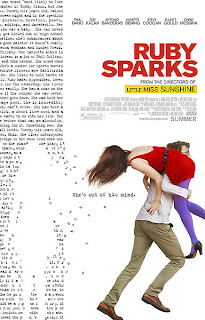 On the surface, "Ruby Sparks" is "Weird Science," cooked together with "Xanadu," "Adaptation.," "Stranger Than Fiction," and "(500) Days of Summer," for the quirky Sundance set. A fanciful twist on the indie romantic-comedy, the film upends the "Manic Pixie Dream Girl" archetype (if one believes that to be a "thing"), crosses life and art, and nestles deep inside the creative mind of a male writer. Coming off the success of their 2006 crowd-pleaser "Little Miss Sunshine," husband-and-wife directing team Jonathan Dayton and Valerie Faris's follow-up is not only more charming, touching, and engaging than most shiny, manufactured romances that Hollywood rolls out, but it feels fresh and from the heart.

Writing wunderkind Calvin Weir-Fields (Paul Dano) has no friends, except for his dog Scotty and his typewriter. Through his writing and what he tells his psychiatrist (Elliott Gould), he's been having dreams of a girl named Ruby Sparks (Zoe Kazan) that's he made up in his mind. Then women's shaving cream and a bra and panties turn up in his house, and the next morning, Ruby is real, or at least he can see her. He reacts accordingly, freaking out and running upstairs, but once she tags along with him in public, people can see her, too. "It's like that movie 'Harvey,' except she's not a giant rabbit!" Calvin tells his brother Harry (Chris Messina), but the writer just accepts it as magic (as do we) and falls for Ruby. At first, it seems like a dream to manifest the perfect girl he's written on paper, but can Calvin handle a real relationship with Ruby?

Written by Kazan, "Ruby Sparks" is not as gimmicky and preciously twee as it might sound. Rather than painting itself into a corner or strictly adhering to formula, Kazan's smart script goes to some unexpectedly dark and inevitably bittersweet places that play with the notion of separating our idea of the ideal person with the flawed person that's really in front of us. The ending almost negates what came before, but with a dash of hope, it's emotionally satisfying.

An item in real-life, Dano and Kazan share genuinely deep chemistry, which is a lovely sight given the bad luck some real-life couples have when attempting to ignite sparks on the screen. As Calvin, Dano presses on as an awkward, neurotic version of Woody Allen, but to box him in as that would be ignorant of his own likability and soulfulness. Of course, the film belongs to Kazan, a warm, radiant, vivacious, endearing, and adorable presence who draws Ruby with numerous notes. The character, a 26-year-old painter from Ohio, wears purple tights, doesn't have an actual job, and can make homemade meatloaf that's out of this world, so she is mostly a collection of "Manic Pixie Dream Girl" quirks, but that's presumably the point. By what Calvin types onto the page, she can be extremely needy, independent, severely depressed, act like an overjoyed child, and even speak fluent French.

The supporting cast is strong, too. One may disbelieve that Dano's Calvin came from the same gene pool as him, but the ubiquitous Messina is grounded and funny as the married, exercise-obsessed sibling who thinks Calvin knows nothing about women. Annette Bening, as the guys' earthy hippie mom Gertrude, and Antonio Banderas, as her furniture-making paramour Mort, are wonderfully offbeat and down-to-earth delights when Calvin takes Ruby to Big Sur for the weekend. Steve Coogan doesn't stretch his acting muscles much, but is reliably smarmy as Calvin's editor; Alia Shawkat has some fun playing the novelist's number one fan; and Deborah Ann Woll acquits herself well as Lila, the "heartless slut" of an ex-girlfriend for five years that left Calvin right after his father died and robbed him of his self-worth.

Cute and compassionate and then more thoughtful as it goes along, "Ruby Sparks" is a gently sweet little gem. It has all the qualities of a "sweater movie," albeit one that doesn't deny the prickliness of real-life relationships, which are never as perfect as the ones you dream existed.