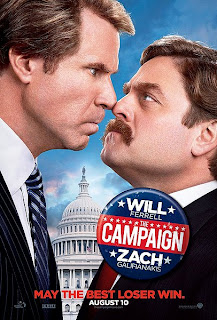 Right away on paper, a project that pits Will Ferrell and Zach Galifianakis against each other as two boobs in a political race sounds like outrageous comic gold. Recouping after 2010's annoyingly unfunny "Dinner for Schmucks" and returning to his political interests after his recent HBO docudrama "Game Change" about Sarah Palin, director Jay Roach and screenwriters Chris Henchy ("The Other Guys") and Shawn Harwell (HBO's "Eastbound and Down") have no pretense of making a smart, spiky political satire with teeth. "The Campaign" is a Ferrell-Galifianakis comedy first and foremost, with its brand of broad, too-too crudeness passing for comedy these days, but it's still timely and scattershot-hilarious. Nowadays, the election process doesn't even seem like it can be satirized anymore. Remember congressman Anthony Weiner's "sexting" scandal?

Seeking his fifth term, clueless Democratic incumbent Cam Brady (Ferrell) runs for North Carolina's 14th District congressional election. He's slick and crowd-pleasing, with a seemingly All-American family in tow, but also phony, vulgar, and too big for his britches. His hair is more important than the people. When his scandalous phone call to one of his concubines leaks to the press, Cam's popularity goes down in the polls, leading to sweatshop factory billionaires Wayne (Dan Aykroyd) and Glenn Motch (John Lithgow) challenging Cam with another candidate. His unlikely opposing player turns out to be cheery, fannypack-wearing, pug-owning goody-goody Marty Huggins (Galifianakis). Cam tries embarrassing Marty, but the do-gooder later proves he has a ton of fight in him to be as cutthroat as his dirty, win-at-all-costs opponent.

If Ferrell's George W. Bush and Galifianakis fought for the congressional seat, "The Campaign" would be the result, with some traces of actual wit amidst today's lowbrow shock humor. There's an amusing montage early on, where Cam repeats what the people want to hear: "Our troops and our veterans…farmers…schools…audio installations specialists and window tinters…Filipino tilt-a-whirl operators are this nation's backbone." Political endorsements are pointedly spoofed, turning around Cam's controversy into a positive and then eventually extending to Cam and Marty's mud-slinging and one-upmanship to up their polls. Not much sophistication can be found here, but enough gags really hit, including but not limited to Cam's accidental punching of a baby (and somebody else who won't be named here), Cam's blasphemous butchering of the Lord's Prayer ("…give us this day our daily pizza and let us digest it…"), and the giggle-inducing aftereffects of him being bitten by a venomous snake at a church.

Ferrell and Galifianakis are both in their "usual" mode, but they are fully committed to creating these over-the-top buffoons. The former plays another lecherous blowhard but does it with his usual stupid-is-as-stupid-does braggadocio, and the latter is doing his usual effeminate shtick but at his most sincere and warmly likable here and makes the dumb joke of stumbling to open a door a funny one. The biggest surprise is Dylan McDermott, who taps into his unexpectedly sharp comic timing as Marty's ruthless, manipulative campaign consultant Tim Wattley. Jason Sudeikis is also sharp as Cam's manager and much funnier when he's playing a straight man. Lithgow and Aykroyd are fun to see as the sleazy "candidate creators," recalling Ralph Bellamy and Don Ameche's Duke brothers from Aykroyd's "Trading Places" and the Koch brothers. Brian Cox is a hoot as the crotchety Mr. Huggins, who disapprovingly says his black-sheep son "looks like Richard Simmons crapped out a goddamn hobbit," and Karen Maruyama is an absolute scene-stealer, bending a stereotype as his housekeeper Mrs. Yao who gets paid extra to speak in an old Southern accent out of "Gone with the Wind." Finally, Sarah Baker is sweet and funny as Marty's pudgy wife Mitzi, especially in a family dinner scene where she, along with her two sons, must confess their secrets, and then when making a sex tape with Cam.

The level of humor might have as much subtlety as "a phonebook in a dryer" but it's not as witless or desperate as one would expect either. "The Campaign" isn't "Wag the Dog" or even TV"s "The Daily Show," nor does it really aim to be, but because of the two funnymen and supporting cast, it rips by with enough easy and broadly silly laughs at 85 minutes. The nicey-nice, truth-telling conclusion definitely could've used a dash of bitters, but this is Hollywood's version of politics after all. Though it's never going to be the quotable, re-watchable landslide that of Ferrell's other vehicles, namely "Anchorman" and "Blades of Glory," "The Campaign" almost consistently brings the laughs to gain enough approval.