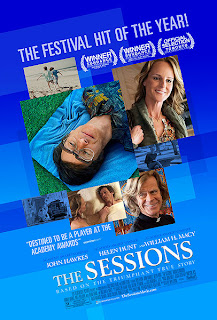 Even if the true story of 38-year-old writer-poet Mark O'Brien who, paralyzed from the neck down by polio and kept alive in an iron lung, hired a sex surrogate to lose his virginity sounds like a glorified Lifetime Movie with nudity, "The Sessions" is one of the more grown-up movies about disability and sex. The film is inspiring, tender, and frank about its subjects regarding the human condition, a testament to the grace of the performances, particularly from John Hawkes and Helen Hunt.

In 1988, Berkeley, CA, Boston-born Mark (Hawkes) has come to function as best as he can with his condition since the age of 6 and under the help of a few caretakers. But since he's approaching his "used-by date," he wants to experience sexual intercourse. Being a devout Catholic, Mark first goes to his priest, Father Brendan (William H. Macy), asking him for his blessing to be with a woman in the biblical sense. He then enlists the services of a certified sex therapist and surrogate named Cheryl Cohen Greene (Hunt, doing a good Boston accent). Mark may not be able to voluntarily move a muscle, but with Cheryl's help, he can feel the sensation of touch—and maybe even something in his heart.

Compassionately written and directed with a delicate, low-key approach, "The Sessions" is from writer-director Ben Lewis, a polio survivor himself, who stumbled upon O'Brien's 1990 article "On Seeing a Sex Surrogate" in The Sun magazine. His film is no more visually stylish or cinematic than a TV movie with solid production values, but that hardly matters. Sex isn't really played for laughs here (although Mark does ejaculate prematurely a good few times), nor is it eroticized. Uncomfortable in the first few sessions, it's just sex that doesn't feel hemmed in. The nature of Cheryl's line of work is also smartly addressed: upon their first meeting, Mark quickly mentions that her money is on the table, and Cheryl retorts that she isn't a prostitute and their sessions are limited to six.

Hawkes prepared for the physical demands of the role by watching the 1996 Oscar-winning documentary "Breathing Lessons: The Life and Work of Mark O'Brien," and the studying certainly paid off. Versatile character actor Hawkes is simply amazing in his turn as Mark O'Brien, making him self-deprecating but sensitive. Mostly photographed horizontally on a gurney or straight-on in bed, he does so much acting with his face and contorted body. There is a lot of talk about Hunt's fearless full-frontal nudity, but she doesn't merely bare it all. Her performance is soul-baring and moving, Hunt beautifully conveying the direct professionalism and compassion of Cheryl with an equal coolness and warmth.

Though the central focus is Mark and his relationship with Cheryl, a few subplots aren't mined too deeply, as in Cheryl's private homelife with her "stay-at-home philosopher" husband (Adam Arkin) and teenage son (Jarrod Bailey), as well as her commitment to converting to Judaism (with a nice cameo by Rhea Perlman as a Mikveh woman). Macy earns laughs as the Catholic priest, listening to Mark in his sanctuary and stopping by Mark's home with a six-pack of beer. These scenes are lightly funny, but used as a clunky plot device for Mark's stories in the bedroom. Moon Bloodgood is also droll and one to watch as Vera, Mark's caretaker who assists him in his sexual awakening.

In the wrong hands of untested actors and a less-serious filmmaker, the material could've been pushed into either sanctimonious melodrama, a gooey, glasses-fogging tearjerker, or wisecracking sleaze. Here, disability isn't handled with a big hug and sex is, for once, portrayed on top of the sheets. With true, affecting emotions and good humor, "The Sessions" isn't such a hard sell but an uplifting picture, albeit one that isn't dumbed-down or pandering.