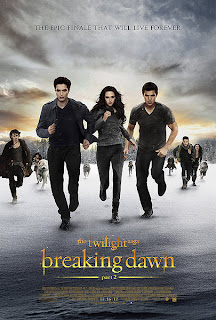 Let's not mince words: the "Twilight" movies have never been, for lack of a better word, good, but they seem to be as well-made as they could ever be with Stephenie Meyer's silly source material. Suffice it to say, they're ridiculously earnest, self-serious young-adult soap operas for the prepubescent girl in all of us. "Breaking Dawn - Part 1" brought on acclaimed director Bill Condon, and with him, the first half of the fourth chapter was imprinted with more style and interestingly weird touches, but still spun its wheels with more of the same sullenness. If there's a "Part 1," there has to be a "Part 2"—surely for monetary reasons—and the pop-cultural franchise gets a rather fitting send-off. Twi-hards will be jazzed and detractors will be excited to never have to see another Edward-Bella-Jacob triangle again, but no matter the camp one belongs in, those that are Team Bill Condon will be glad that the final chapter embraces its own silliness with intentional tongue-in-cheekiness.

If you're keeping score at home, you know that Bella was turned into a red-eyed vampire at the end of "The Twilight Saga (colon) Breaking Dawn (dash) Part 1" after dying while giving birth. "I was born to be a vampire," Bella (Kristen Stewart) says, as she has stopped aging three days ago and finally shares the same body temperature as hubby Edward (Robert Pattinson). She can't get her thirst under control (human mountain climbers are as safe as mountain lions) and she's pretty forceful in the bedroom, too. And she sparkles in the sunlight because, you see, vampires don't perish when exposed to the sun in overcast Forks, Washington. Bella and Edward's daughter, Renesmee (Mackenzie Foy, with her face digitally transposed onto younger body doubles), is a crossbreed and has been "imprinted" by werewolf Jacob (Taylor Lautner). Once the Cullens' cousin Irina (Maggie Grace) spots Bella and Jacob playing with Renesmee from afar, she misinforms the powerful vampire coven, called the Volturi, that the child might be immortal, which could be a threat to those pesky Italians. This means gathering a whole UN of vampires to help the Cullen clan protect the little one.

Opening with gorgeous gothic imagery for its credit sequence, the film then learns to laugh at itself. Faithful screenwriter Melissa Rosenberg actually acknowledges the strange goofiness of Jacob "imprinting" on Renesmee: Bella snaps, throws Jacob around, and growls, "You nicknamed my daughter [Nessie] after the Loch Ness Monster?!" (What is Mom going to do when the kids at school rip her daughter's name to shreds?) Muscle-bound Emmett Cullen (Kellan Lutz) gets in a handful of one-liners in his reactions to Bella's new rock-breaking strength. Then, when Bella must patch up with her father, Charlie (Billy Burke), without revealing her new transformation, the Cullens give her tips to act human, like blink a lot and slouch, which acts as an amusing nod to Stewart's mocked acting style.

Stewart basically spent the first two movies playing a glum tug-of-war object for two animalistic suitors, then came into her own in the third. Now that Bella has lost her emotional constipation and adapts to her new immortal ways, she's more fun to watch. Who knew it would take death and red contacts to make the character more lively? Pattinson is almost a non-entity here, but Lautner naturally gets to take off his shirt, as well as his pants, to introduce Bella's dad to the supernatural world. But it's really Michael Sheen, as Volturi leader Aro, who's enjoyably loopy and campy, especially when he lets out a high-pitched laugh.

Make no mistake, "Breaking Dawn - Part 2" is still pretty anemic and all over the place on a narrative level. The stakes hold no real weight to the plot, which passes the time with a lot of standing around and piling on of anonymous ally vampires (Rami Malek, Lee Pace, and Joe Anderson are among them) who all have mutant powers and cool-looking eyes but don't get much else to do. The most eventful element that, according to the trusty Wikipedia page, doesn't religiously follow the book but deviates from it is the grand final showdown. This battle set-piece is delightfully intense, bold, exciting, and just a lot of bonkers fun. Heads don't just roll; they get yanked and ripped off like Barbie dolls first. Indeed, it turns out to be a cop-out but works as a funny "gotcha" and is well worth the trip to Crazy Town before it's goodbye. When that time comes, fans will rejoice in flashing back to the beginning of Bella and Edward's eternal love, complete with Christina Perri's sappy song "A Thousand Years," and seeing the closing credits' curtain call of every cast member in the franchise (Anna Kendrick! Cam Gigandet! Bryce Dallas Howard!).

For what it's worth, this is a satisfactory conclusion to the mostly fans-only franchise. Parting is such sweet sorrow, but there needed to be closure, and this one does it with some fun and class.