Prickly, funny "This Is 40" could be called 'Apatow Family Videos' 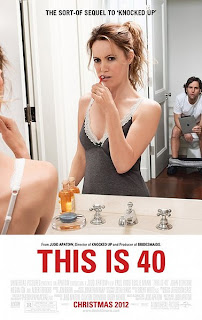 Billed as a "sort-of sequel to 'Knocked Up'," writer-director Judd Apatow's latest is more of a spin-off, a slice-of-life microcosm of one Brentwood, Calif., family's career, money, marriage, familial, and aging problems. Ben (Seth Rogen) and Alison (Katherine Heigl) already had their story in 2007's "Knocked Up." Paul Rudd's Pete and Leslie Mann's Debbie were the hilariously acid-tongued Greek chorus/supporting players, and now "This Is 40" belongs to them. 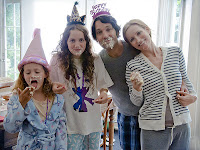 In the five-year interim, Pete and Debbie haven't gotten any younger. "40 can suck my dick!" Debbie exclaims, as she's just hit the big 4-0 but lies about her age, telling people she's only 38. Pete's 40th birthday celebration is also coming up in a few weeks, but he's just going with the flow. They live in their unnecessarily extravagant suburban home; Pete runs an indie record label and has currently signed on aged British rocker Graham Parker with his backup band, The Rumour, but the business might not survive; and Debbie owns a little boutique store, where one of her salesgirls, Desi (Megan Fox) and Jodi (Charlyne Li), might've stolen $12,000 of their profits. "We're gonna blink and we'll be 90" Debbie tells Pete. She wants to work on their health, communication, and overall happiness; improve their sex life without "turbo-ing" it with Viagra; and kick their clandestine habits (he sneaks eating cupcakes, she sneaks smoking cigarettes). They also want to contend with their resentments toward their respective fathers: Pete needs to stop lending money to his mooch of a dad, Larry (Albert Brooks), who can barely support his three test-tube sons, and Debbie wants to make up for lost time with her distant, humorless biological dad, Oliver (John Lithgow). Their two daughters have grown up a bit, too: 8-year-old Charlotte (Iris Apatow) just wants to play with her big sister, while 13-year-old Sadie (Maude Apatow) lives on her iPad watching the whole series of TV's "Lost." The parents suggest Sadie to play outside and make a fort, and cut back on the technology. Bickering and hugs ensue.

Even if there's something self-indulgent and self-congratulatory about a filmmaker's family affair being carried to the silver screen, one still won't mind watching these characters who (mostly) respond to everyday situations like in messy real life. Apatow has obviously drawn from his own homelife and marriage, pulling out prickly, perceptive nuggets of honesty and insight, as well as oodles of Apatow-y laughs that deftly balance the juvenile stuff and real-life, observational humor. When Pete and Debbie get away from the kids on a brief getaway in Laguna, they share a bitterly funny tête-à-tête about how they'd kill each other and then have some fun with a medical marijuana cookie (the one time Seth Rogen's character name is mentioned). There's a rib-tickling montage of physicals, colonoscopies, dental and gynecology appointments, but a lisping Indian doctor joke is too easy, even if Rudd gives it a soft landing. Pete and Sadie engage in some clever banter over "Mad Men" and "Lost." One can tell Apatow is maturing (there's only one fart gag and it's unscripted)—and he's already such a household name from producing every other comedy that it's hard to believe this is only his fourth feature film since 2009's "Funny People," which felt personal but twice its length—but as is his wont, "This Is 40" is scattered and feels protracted by 40 minutes.

What helps immensely is re-casting the likable and humorously sharp Rudd and Mann as Pete and Debbie. They both get the chance to stretch their dramatic and comedic chops more than usual; as Pete, Rudd is goofy, but not stupid, and as Debbie, Mann can be a bit needy, but perhaps that goes with the territory of getting older, having an absentee parent, and taking on so much. Also returning from "Knocked Up" are Mann and Apatow's real-life daughters, Maude and Iris, who are also good: Maude is expressive but often goes too big when sassing Mom with the shrill brattiness, and Iris is adorably funny.

About the aforementioned overlength: Apatow does not know brevity, as if he couldn't bear to do some pruning, especially now that the material hits so close to home. He often gets sidetracked with giving fringe parts and long, improvisational bits to his troupe of funny talent. It makes sense to have Jason Segel on board as Deb's personal trainer, not only because he's playing a variation on his Jason, who was sweet on Deb in "Knocked Up," but also from working with Apatow since TV's "Freaks and Geeks." Charlyne Yi is here, too, but her Jodi doesn't seem to have any relation to the Jodi in "Knocked Up." The supporting cast was seemingly on Apatow's speed-dial: Chris O'Dowd, "Bridesmaids" co-writer Annie Mumolo, Robert Smigel, Lena Dunham, Megan Fox, and Melissa McCarthy. As she proved earlier this year in "Friends With Kids," Fox actually has some acting in her, after all: she's self-aware and wickedly funny. McCarthy has some truly funny moments (even in the outtakes) as an unpleasant, vitriolic mother with a son at the same school as Sadie. Brooks and Lithgow (which is amusing, considering Mann played Lithgow's trophy wife in "Orange County" and now plays his daughter) also make their moments count.

Reactions are going to be split down the middle in how Pete and Debbie could potentially lose their house, even with them driving a BMW and a Lexus, working cushy jobs, and having enough money left over for their romantic resort getaway and Pete's catered birthday party in the backyard, but such things are treated with a bit more truth and complication than most out-of-touch First-World Problem Movies. One won't have to be in the middle of his or her life, be married, or have kids to completely relate to this painfully funny snapshot of marriage and parenthood, but it might help.