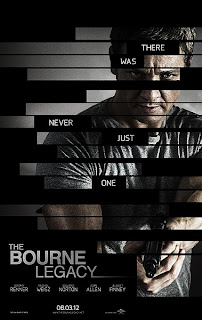 Loosely based on the Robert Ludlum novels, 2002's "The Bourne Identity," 2004's "The Bourne Supremacy," and 2007's "The Bourne Ultimatum" were all tight, crackerjack spy thrillers. Just when Hollywood left well enough alone to a muscular trilogy, a parallel sequel-cum-spin-off ("a sidequel?") without Matt Damon gets greenlit. Now, with Damon gone, the same goes for amnesiac ex-CIA assassin Jason Bourne. It'd be nothing new if another actor replaced Bourne (the same happened with Batman, James Bond, and Darrin on TV's "Bewitched"), but "The Bourne Legacy" is refreshingly different—a separate animal, which survives on its own.

As the CIA hunts Jason Bourne in New York City to keep its secret, shady Operation Treadstone out of the limelight, another program called Operation Outcome is in the process of being shut down. You can just hear Mr. Moviephone now, announcing "There was never just one. Jason Bourne was the tip of the iceberg." One of the genetically enhanced Outcome super-soldiers, Aaron Cross (Jeremy Renner), is on a training assignment in rugged Alaskan terrain and remains on a strict "chem" diet (blue and green pills). Meanwhile, retired U.S. Air Force colonel Eric Byer (Edward Norton) wants to keep Outcome's scientific advances under wraps, so every agent and scientist is targeted for extermination. But Aaron is not going to be easy to kill; he's crafty with nothing but a nail and a fire extinguisher, and then he finds an ally in surviving geneticist Dr. Marta Shearing (Rachel Weisz) to get him his chem fix before he reverts back to his regular self. Too bad he can't just pick them up at the nearest CVS pharmacy. 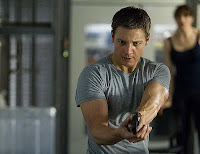 More coolly brainy than plotty, "The Bourne Legacy" is not nearly as airtight as the first three installments, but it's still brisk and engaging. Co-written by "Michael Clayton"/"Duplicity" director Tony Gilroy (who co-wrote all three "Bourne" movies) and his brother Dan, the screenplay doesn't veer off the rogue-spy-on-the-run template but cleverly overlaps the events of "Ultimatum" with an emphasis on drug addiction instead of amnesia and finding one's identity. After about an hour of convoluted setup and a lot of dense, medical/pharmaceutical jargon, the film finally cuts to the globe-trotting chase, literally, and really picks up. In his first time out as a real action director, Gilroy keeps everything moving apace and makes use of tripods, with cinematographer Robert Elswit ("Mission Impossible - Ghost Protocol" and "There Will Be Blood"). Whereas the hyperkinetic, realistically chaotic shooting style and whiplash cutting from Paul Greengrass, the director of "Supremacy" and "Ultimatum," grew a bit weary, Gilroy's film is more dynamically shot and cracklingly cut. Even if it is not wall-to-wall ass-kicking, there's plenty here for adrenaline junkies. In the Alaskan wilderness, there's a wolf attack a la "The Grey" and some explosions. There's a nail-biting stalk-and-shoot sequence in a lab with Marta and her gone-psychotic colleague (Zeljko Ivanek). A tautly choreographed set-piece has Aaron showing up exactly at the right moment in Marta's unfinished home to fight off some CIA baddies. Finally, a climactic motorcycle chase in Manila, Philippines is breathlessly thrilling.

The "Bourne" movies certainly have one thing down: it's more interesting to have a fully capable actor performing action stunts, rather than a cast member from "The Expendables" movies. Damon, who appears briefly here in mugshots and a newscast, carried enough weight and held our rooting interest through three movies. By comparison, the lean and mean Aaron Cross is more underwritten, but Renner lends such a quiet, magnetic intensity to the role, as well as some physical and mental vulnerability, which keeps him from being just a one-note, invincible cog in the machine. He's clearly been to the gym, too, in playing a killing machine who can hop across buildings and scamper up walls like Spider-Man. Rachel Weisz is mostly along for the ride, but she has enough backbone to not fall into the trap of being a damsel-in-distress or love interest. After being put through some major trauma at the laboratory, she actually asks questions before being thrust into the action with Aaron. While previous players Joan Allen, Albert Finney, Scott Glenn, and David Strathairn only put in cameos, we get Norton, Donna Murphy, and Stacy Keach instead. These superior actors don't stumble on any of their government-related dialogue, but aren't given the chance to really go above and beyond their call of duties (i.e. standing in front of computer screens and barking orders).

It doesn't take a super-spy to realize Universal Pictures is merely out to feed the machine. Just when "The Bourne Legacy" has found its pulse, the film abruptly ends on an anticlimactic note with the obligatory use of Moby's song "Extreme Ways" to signal the end credits, even though it's already gone on for 135 minutes (that's longer than any of the previous ones). Granted, this is just a placeholder for another bigger, faster, stronger reboot to the profitable franchise. Once you ignore the slight smell of commercial cynicism and judge the film on its merits alone, it exhilarates when it should. On balance, star Renner and director Gilroy give this fourth "Bourne" some charge, and if the series has to keep going, this is a pretty fun, efficient start.