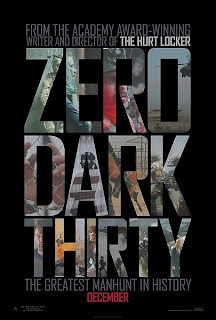 To call "Zero Dark Thirty" a propaganda action-thriller would be both inaccurate and misleading. It's a clinical, methodical procedural and a long, winding piece of journalism about one of the most difficult post-9/11 subjects: the global needle-in-a-haystack hunt for Osama bin Laden. The film often stands emotionally at arm's length from the viewer, and yet it can't be ignored, based on what director Kathryn Bigelow and second-time collaborator, journalist-turned-screenwriter Mark Boal, bring to the table after 2009's intensely gripping "The Hurt Locker."

The film, purported to be a first-hand account, opens to a black screen that indicates the terrorist attacks on September 11th, 2001, simply with audio of the frantic phone calls. It sets the scene and is far more powerful without a visual recreation. In 2003, CIA targeting analyst Maya (Jessica Chastain) is reassigned in Pakistan to work with interrogation expert Dan (Jason Clarke). At an undisclosed black site, she just observes an imprisoned Saudi Arabian suspect being intimidated until revealing the whereabouts of the al-Qaeda terrorist leader via torture tactics of waterboarding, starving him, stripping him and putting a dog collar around his neck, and shoving him into a tiny, wooden box. Over the course of the next eight years, which comes with multiple attacks, bribery, and false leads, Maya hardens, remains 100% certain, and becomes increasingly obsessed with the name of bin Laden's courier. She won't sleep until she finishes the job.

Made with cold, hard, businesslike precision and an unflinching verisimilitude, "Zero Dark Thirty" makes a formidable impact. Boal's streamlined but meticulously researched script tracks the 10-year-long manhunt, and details just how frustrating the search is. A big reason why the film is such riveting stuff, not tedious or repetitious, and why bin Laden was actually found, goes to Maya, or rather, the performance by Chastain. Like Jodie Foster's Clarice Starling and Claire Danes' Carrie Mathison on Showtime's "Homeland," Maya may look soft, but she has a backbone, a laser focus, and no filter when it comes to calling out her superiors' errors. Chastain is extraordinarily committed and fiercely commanding, essaying resolve and intelligence, as well as a dynamic, internal character arc. She first appears uncomfortable witnessing Dan torture interrogating a detainee. As we learn, Washington reputes her to be "a killer," and as Maya grows so focused and consumed in her search, we believe it. Even being given merely a name and no backstory, Chastain's Maya is the closest to an emotional anchor, and yet it seems like she has no friends or life outside of work. It took a decade, but she is the one that ends up finding OBL after all.

A hefty supporting cast is on hand, too, as functionaries to the manhunt with small performances standing out. Clarke is excellent as the bold-as-brass Dan, as is Jennifer "the Meryl Streep of her time" Ehle as Jessica, Maya's colleague and closest friend. The rest includes Kyle Chandler, Mark Strong, James Gandolfini, Mark Duplass, Harold Perrineau, Joel Edgerton, and Chris Pratt.

Its stance on using torture to get answers has already spawned controversy and divisive discussion, but it's morally challenging without endorsing the methods of "enhanced interrogation" or soft-pedaling the brutal ugliness. Do the ends justify the means? For the record, the torture proves effective but is wearying for those involved and to the audience. The film welcomes debate anyway, but Bigelow and Boal go the neutral, apolitical route, telling their story as close to fact as their research told them.

Even at 157 minutes, which would sound butt-numbing and bladder-suffering, Bigelow and her editors (William Goldenberg and Dylan Tichenor) move everything in one compulsively watchable sweep like a slow, propulsive fuse. Greg Fraser's urgent hand-held camerawork is embedded with real intensity, the bombings in London, Islamabad, and at Camp Chapman keeping the viewer consistently on pins and needles. Then, when the Navy Seals infiltrate bin Laden's compound home in Abbottabad, Pakistan, at night, the raid is a hold-your-breath, in-real-time climax, shot through darkness and night-vision goggles.

We already know the outcome, but it's a testament to the filmmakers that the final act holds us in such an excruciatingly tense, you-are-there grip, which won't loosen until we see bin Laden in a body bag. Additionally, Bigelow and Boal wisely don't go for a rah-rah, jingoistic triumph of an ending. While "Argo" Hollywoodized its crazy-but-true story in history with exciting manipulation, "Zero Dark Thirty" dramatizes its event and still feels unadorned and matter-of-fact, giving this film a more enduring power. There's a sense of catharsis for Maya, America, and those of us clenched in our theater seats, even if none of us knows where to go from there.