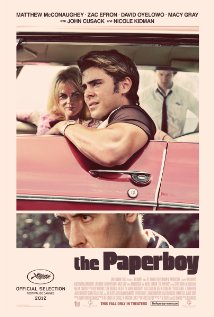 Overwrought and overheated, "The Paperboy" is a pulpy, trashy piece of Southern Gothic crime-noir that has no problem wallowing in the sweat, sleaze, and alligator guts of its backwoods Florida-set tale. Directed by Lee Daniels (2009's unshakably powerful "Precious: Based on the Novel 'Push' by Sapphire") from a script he and Pete Dexter adapted from the latter half's 1995 novel, the film is by turns melodramatic and meandering, albeit could never be accused of being boring. It's a complete mess, but recommended as a tastily oddball, see-it-to-believe-it mess. In fact, this would make an ideal triple feature with 2006's "Black Snake Moan" and, most recently, 2012's "Killer Joe."

To borrow lyrics from The Weather Girls, humidity is rising . . . and it never ceases during the summer of 1969 in Moat County, Florida. After the birth of the Civil Rights movement, times were still racially controversial. 20-year-old former swimming champion Jack Jansen (Zac Efron) lets life pass him by, delivering papers for his dad's newspaper. Then his Miami Times journalist brother, Ward (Matthew McConaughey), comes back to town, alongside his prideful black British partner Yardley (David Oyelowo), to look into the murder of a sheriff. An uncouth alligator hunter, Hillary Van Wetter (John Cusack), has already been convicted, but the suspect's sultry, oversexed blonde girlfriend, Charlotte Bless (Nicole Kidman), swears by his innocence. When she comes to Ward with boxes of evidence to take her man off death row, Jack immediately lusts after the floozy, but he's just a young paperboy.

Narrated by the Jansens' long-suffering maid Anita (Macy Gracy) as an omniscient observer, "The Paperboy" plays like a coming-of-age drama with sex and murder thrown in. Daniels imbues his film with a sweaty, superimposed, often dizzying style, and it's apropos for this tawdry sort of story. The cinematography by Roberto Schaefer communicates a palpably besotted mugginess and complete lack of air conditioning that you'll either need a fan or a cold shower before suffering heatstroke. Daniels finds the right tone for most of it but less so when careening into absurdity. Are we to take it seriously or chortle at how cuckoo-bananas some of it is? In a visually hallucinatory and non-kinky scene, Jack is surrounded by a gaggle of beach sunbathers after swimming to shore from being badly stung by a jellyfish; Charlotte shoves them aside, stands over him, and urinates on his stung body. And that's not even the most bizarrely entertaining scene. Earlier in the film, when Charlotte and Hillary reunite in a prison visiting room, they satisfy each other's carnal desires without having any physical contact. With mutual heavy breathing, total ecstasy, and Charlotte spreading her legs and ripping her pantyhoes, it's the most erotic, borderline John Waters-campy, NC-17-rated moment of the year. Again, this would fit right in with "Killer Joe's" now-notorious "chicken leg" bit.

The cast admirably lets its guard down and gets adventurous with the seamy material. Leading the way as Jack, Efron proves himself to be more than just the golden-haired pretty boy from "High School Musical," and not only from appearing in nothing but whitey tighties so often. Anything but understated, Kidman is fearless and uninhibited, radiating pheromones like a cat in heat but tarted up in tacky miniskirts and layers of eye-liner. She acts the hell out of this, completely throwing herself into the role of Charlotte. Cusack is convincingly scuzzy and quite scary as Charlotte's "wrongfully accused" jailbird lover. McConaughey is also good, no longer the smarmy leading man in rom-coms but a sharp character actor, as he plays Jack's brother who's obsessed with the case and harbors a secret of his own. But unexpectedly turning in the most touching and understated performance is Gray. Her workhorse Anita puts up with a lot in the current times, especially patriarch W.W. Jansen's (Scott Glenn) new girlfriend/editor (Nealla Gordon), and has become a dear friend to Jack.