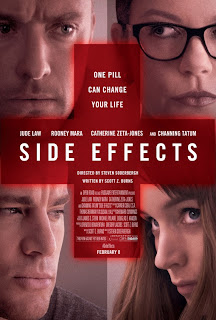 After scoring with "Haywire" and "Magic Mike" just last year, eclectic and prolific director Steven Soderbergh insists that "Side Effects" will be his last theatrical film before retirement. That's too bad because his latest, an icy, craftily constructed pharmaceutical mystery-thriller, is a pretty potent thrill, even for a genre exercise. Soderbergh instantly evokes a distinctly Soderberghian but undeniably Hitchcockian mood, an entrancing slow-burn that begins with a "Psycho"-esque opening shot. Very slowly, the camera creeps over the cityscape to one window of an apartment complex. Next, from what we see inside that apartment, one could imagine Hitch doing a movie promo and dropping the line, "And in this apartment, the most dire, horrible events took place."

Here's what you're allowed to know: 28-year-old New Yorker Emily Taylor (Rooney Mara) has just reunited with her husband, Martin (Channing Tatum), who's spent four years in prison for insider trading. While Martin attempts to recover his lost wealth, Emily continues to fall into the throes of a deep depression that could potentially harm her. Even a garage attendant at her ad-agency workplace could tell you she's not quite right. Her psychiatrist, Dr. Jonathan Banks (Jude Law), soon prescribes a new drug, Ablixa, which is recommended by Emily's former shrink, Dr. Victoria Siebert (Catherine Zeta-Jones). Ablixa is supposed to produce more serotonin in the brain but comes with some pretty dangerous side effects that won't bode well for anyone. To reveal what happens next would have to come with a blinking "spoiler alert," so why waste the electricity?

Scripted by Scott Z. Burns ("The Informant!" and "Contagion"), "Side Effects" boasts a grabby premise, starting out as a grounded, gripping observation of a woman's inflicted collapse into depression. It doubles as a cautionary indictment of Big Pharma that poses thorny, intriguing questions: are antidepressants actually effective or do they just temporarily mask the problems? Can the bad side effects of meds be chalked up to doctor negligence? Then after the first 80-odd minutes are up, it reveals itself to be a tricky bait-and-switch. Sympathies shift and so do the plot gears, which isn't necessarily a criticism, and then hatches a taut, deceptively tawdry and ludicrously entertaining nothing-is-what-it-seems thriller. Prodding along and taking us right along with it, the film's final payoff won't go down in the pantheon of original storytelling—plot twists of scheming and double-crossing aren't anything new—but it's slickly done. Were it not for the director's coolly detached approach (which is more than appropriate, given the subject matter) and the skill of the performances, the twisty-turny path of the plot would be the toughest pill to swallow.

First making an impression with her brief role in "The Social Network" and then going method in her brave perf as "The Girl with the Dragon Tattoo," Mara keeps proving to be one of the top working actresses today. Her work as Emily might even be her strongest, Mara showing an outward fragility and an inner complexity. As the doc and family man, Law turns in one of his most effective performances to date, blending empathy, obsession, and paranoia. Tatum is in fine form as the out-of-jail hubby, and Zeta-Jones is cunning, exuding a sexy confidence even in pulled-back hair and horn-rimmed glasses. Ann Dowd and Vinessa Shaw round out the supporting cast as Martin's mother and Banks' wife and, though given limited screen time, Soderbergh still draws vividly etched performances from them.

Soderbergh should really rethink hanging up his directing reigns because he's right on top here and might as well keep going. His supposedly last film be damned, "Side Effects" isn't made with any less assuredness than previous efforts. From off-kilter camera angles, to the mustard-tinted color palette, and sleek digital cinematography (shot under Soderbergh's usual pseudonym "Peter Andrews"), it has all of the director's stylish earmarks. So, if you don't mind a film going down one alley and then turning down another alley, only to pull your chain, then "Side Effects" will have a disorienting but satisfying effect. Manipulation never tasted so delicious.