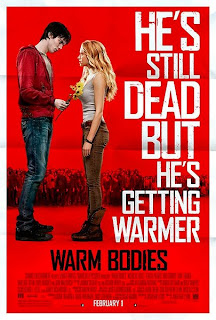 It seems like zombies haven't limped along like drunkards since George A. Romero laid the groundwork with 1968's "Night of the Living Dead." Ever since, the living dead has been on the rise, saturating pop culture every which way. With so many spins on the undead mythology of yore—"28 Days Later" and "28 Weeks Later" re-animated zombies as terrifying marathon runners, the affectionate British spoof "Shaun of the Dead" and the rollickingly witty "Zombieland" had fun with genre conventions, and the bleakly compelling AMC drama "The Walking Dead" is already on its third season—a post-apocalyptic zombie romantic comedy wouldn't seem completely out of the question. Based on Isaac Marion's popular YA novel, "Warm Bodies" handles the possibility of the living dead being able to love. Lest one believe this just adapts the "Twilight" template because it has a mortal girl (who just so happens to look exactly like Bella Swan's acting counterpart) falling in love with a monster of sorts and is being distibuted by that franchise's same studio, that's precisely where the comparisons end. Instead, we have a freshly funny, sweetly touching, and consistently entertaining original.

In the aftermath of a zombie apocalypse, humans have set up a wall barricade that protects them from a city of shambling, cannibalistic zombies. On that other side, the pale, slouchy R (Nicholas Hoult) just wants to connect with people, but he's a corpse who can't remember the rest of his name, why he wears a red hoodie, or anything else of his former life. He spends his time shuffling around a foresaken airport with the rest of the walking dead; communicating with his "best friend" M (Rob Corddry) by a grunt and an awkward stare; counting down the days until he becomes one of the vicious, skeletal "Boneys"; and eating anything with a heartbeat wherever he can find it. Trouble is, R is a bit conflicted about hurting people for food. Really, he just feels lost and lonely, and really wants more out of life. When R and his pack sniff out a group of twentysomething survivors, he sets his eyes on Julie (Teresa Palmer) and love is instantly in the air, at least from where he stands. R could eat her brains but chooses to guide her past his fellow brain-eaters to safety in his "home," a 747 filled with the knickknacks he collects. At first, she doesn't know what he is but, beyond his rotting flesh, sees something different and humane in him for the few days they spend together. Julie thinks there just might be a cure for R and the apocalypse, but try telling that to her military father, Grigio (John Malkovich), who controls the walled zone and wants to put a gun to every zombie.

This might have been a groaner. The PG-13 rating could have sanded and dumbed down the material. A "zom-rom-com," if you will, would not seem tonally feasible and could have verged on self-parody. What a surprise then that writer-director Jonathan Levine (he of 2006's underseen retro-horror pic "All the Boys Love Mandy Lane" and 2011's wonderfully moving "50/50") pulls off another tricky balancing act with aplomb, only now melding welcome humor, flesh-eating, and gentle love. Levine's strong visual style and steady pacing, neither lagging nor inducing whiplash, can't hurt either. Unless it's gone unnoticed, "Warm Bodies" is the first film to make a flesh-eating walker a hero with a point-of-view. In one of several clever ideas, we get inside the head of R from his internal voice-over. Of course, as a zombie, he can only groan and grumble a word or two, but through narration, a playfully sharp sense of wit and an intriguing point-of-view are established. "What am I doing with my life?" is his opening line. In describing his typical day of shuffling around, he quips, "God, we move slow. This could take a while." As a way of upending convention (and being an economical shorthand for character development), R can eat one's brains and see what it's like to be human again by living through the devoured's memories. Also, the aforementioned "Boneys" mainly exist to be the real killers so the zombies and humans can become allies. There's even a glimpse of what used to be at the airport in a bit of post-"Dawn of the Dead" social satire about how we, as a society, have lost all connection with one another because of technology, but it's not heavy-handed. The "Romeo and Juliet" allusions (come on, the characters are R and Julie) are cute without being overly obvious, there's an amusingly self-aware reference to "Pretty Woman" without being beaten into the ground, and the brief face value of Lucio Fulci's "Zombie" (aka "Zombi 2") earns a chuckle.

Growing up from the titular boy that won over Hugh Grant in 2002's "About a Boy," Hoult tackles the cadaverous role of R with charisma, pathos, subtle humor, and a soul behind those blue but dead eyes. Based on the perfected stagger, grunt, and facial expressions that convey a life hoping to break out of a dead shell, it's quite an inspired performance from the British 23-year-old. With every movie, Palmer keeps looking like Kristen Stewart's twin with more personality and none of the storm-cloud pout. That aside, the Australian actress portrays Julie not as a spineless damsel in distress or just "the girl," but as a tough, intelligent young woman who has experienced loss, doesn't see eye to eye with her father, and gains something in R. Also, her overdone zombie walk to throw off the undead is a cute bonus. Hoult and Palmer make a winning couple to root for until the end, and perhaps R will become a "real boy" again so it won't be considered necrophilia. The rest of the supporting cast lends some quirks, including Analeigh Tipton, who's delightfully funny as Julie's friend Nora; Dave Franco, continuing to impress as he gives some dimension to Julie's boyfriend Perry; and Corddry, challenging his comedy chops with mumbles and groans. If there's any weak link, it's Malkovich, who's given little of interest to do and just barely keeps Grigio from being a cardboard bad guy. Conflict between he and his daughter is established from the onset, but it only skims the surface.

What's so surprising is how Levine plays the R-and-Julie relationship completely straight and how well it pays off. The moments between R and Julie in his hideout are especially low-key and lovely. Music is also a major highlight, as the selections aren't only perfectly chosen and lyrical but also become part of R and Julie's bond when listening to his vinyl collection. Their first "meet cute" is set to John Waite's "Missing You," and later when the two hole themselves up in the airplane for a few days, there's a charming montage of them dancing and playing games to Bruce Springsteen's "Hungry Heart." It's not hard to connect with R and Julie and care about them as characters. You'd have to be, well, dead to not feel something. "Warm Bodies" can't really be encapsulated solely as a zombie movie because it's not particularly scary nor tries to be. It's not an all-out comedy, either. More truly, it's a love story told with so much empathy and compassion. A nice treat that works its spell on you, this is one of the brighter surprises to come out this early in the year.