DVD/Blu-ray: "Wreck-It Ralph" is a sugar rush of energy, heart, and wit 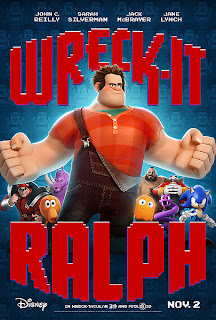 Boasting a familiar, albeit imaginative, concept, "Wreck-It Ralph" does for video game characters what "Toy Story" did for toys. From Disney Animation Studios, this witty, colorful, endlessly entertaining film will play to the nostalgia of those who grew up playing Nintendo and Sega Genesis but one's enjoyment won't exclusively depend on it. It has enough fun energy, invention, and personality from the voice work to be accessible and hold the attention spans of kids and their parents.

In the arcade-game world, Wreck-It Ralph (voiced by John C. Reilly) is the 9-foot-tall, 600-pound "human" wrecking ball of the 8-bit game "Fix-It Felix Jr." He's the "bad guy," wrecking the apartment building that the titular hammer-wielding Felix (Jack McBrayer) tries to keep fixing, but really, he's not a bad guy. Ralph may be of a lumbering size with fists bigger than a gorilla's, but he's tired of feeling unappreciated and living in a garbage dump of bricks that overlooks the other game people's chic penthouse. On the 30th anniversary of "Fix-It Felix Jr.," where a cake and yet another shiny medal are rewarded to Felix, Ralph decides that he can be a "good guy" if he claims a medal from another game. First, he wanders incognito into a post-apocalyptic first-person shooter game, called "Hero's Duty," where he blindly follows leader Sergeant Calhoun (Jane Lynch) into shooting up cyborg bugs and earns a medal. Then Ralph gets thrown into the literally candy-colored go-kart game, "Sugar Rush." Everyone from his game is afraid he's gone "turbo" and that, without him, the arcade keeper could pull the plug and place an "out of order" sign on their game.

Meanwhile, as Coulhoun finds it her duty to bring back a destructive bug that's set loose in "Sugar Rush" and Felix tags along to bring back his would-be nemesis, Ralph meets a pint-sized but big-mouthed "glitch" named Vanellope von Schweetz (Sarah Silverman). She's alienated from everyone in her Candy Land-type game, so she steals his medal to compete in a big go-kart race and prove that she's not an outcast. Can Ralph and Vanellope rise up and be heroes together? Reilly is perfect as Ralph, turning him into a lovable lug whom we can root for to shake off his villainous reputation. Vanellope could have been an annoying pest, but Silverman turns her into an adorably endearing spitfire that earns laughs, as well as our sympathy in the quieter, character-based moments. Like Ralph, she is a lonely, misunderstood outsider (and underdog), their unlikely friendship becoming the heart and soul of the film.

Director Rich Moore, making his feature debut after working on "The Simpsons" and "Futurama," and screenwriters Phil Johnston and Jennifer Lee obviously have more than a small affection for video games, and the film is a testament to that affection that makes it such a joy to watch. The way that the game world works is smartly clever in itself: when characters aren't being played, they cross over through the electrical chords, like a subway, into the power strip called Game Central Station. Down to the smallest details—the retro characters are in jerky 8-bit mode and the newer game avatars have a slicker motion-capture quality, unplugged game characters are change-collecting hobos in their hub station, and a lost-and-found box is full of mushroom and exclamation point power-ups—"Wreck-It Ralph" is brimming with in-jokes and cameos, especially in the first half, that never overstay their welcome. Diehard gamers will really appreciate spotting the Pac-Man ghost "Clyde," Bowser, and Doctor Robotnik (Eggman), just to name a few, in a "Bad-Anon" therapy group that Ralph attends. Q*bert and his "@!#?@!" speech balloons also pop up, and there are obvious, however brief, nods to "The Wizard of Oz," like the castle of "Sugar Rush's" King Candy and his "Oh-Eee-Oh"-ing Oreo cookie guards.

The supporting voice work is quite strong, too. McBrayer sells the character of handyman Felix with tons of gee-whiz charm and enthusiasm. Lynch is basically playing an even tougher Coach Sue Sylvester from TV's "Glee" as the acerbic, hard-as-nails Calhoun with a tragic backstory. Alan Tudyk is also very funny, lending an effeminate glee as the greedy, calculating King Candy. As for aesthetics, no viewer can complain of the animation falling short. The candy-coated "Sugar Rush" is particularly eye-popping, with candy cane trees, chocolate rivers, a cave with a "Diet Cola Hot Springs" and Mentos stalactites, Laffy Taffy vines, and gumdrop rocks.

Several plot threads clutter the focus and all come together as you'd expect them to, except for one big reveal, but those are very minor quibbles. Like a video game, the film is just manic enough, moving at a kicky, lightning-fast pace, but never leaves its characters in the dust for the sake of noisy action. There's a lot to like about "Wreck-It Ralph," and Pixar may get all the attention with the emotional heft the creators bestow upon their features, but this Disney animated jewel is full of fresh wit and has a sweet heart. It's worth every quarter.