Exciting, dopey-fun "Olympus Has Fallen" delivers what it promises 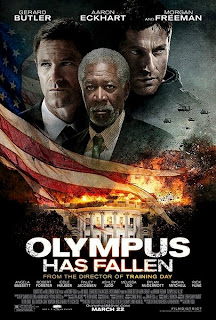 This year's first White House-under-siege action picture (Roland Emmerich's "White House Down" is due out this summer), "Olympus Has Fallen" is more of a "Die Hard 5" than "A Good Day to Die Hard" was. That's most certainly a good thing for director Antoine Fuqua ("Training Day"), who knows his way around a violent action sequence, and star Gerard Butler, who gets to play to his strengths as a badass action hero instead of a romantic leading man. Since originality is rare these days (there are a slew of "Die Hard" similarities here), this dopey, derivative but entertaining action flick delivers where it counts as an ultra-violent popcorn movie.

High-ranking Secret Service agent Mike Banning (Butler) did all he could after icy winter roads spun the car that was transporting President Benjamin Asher (Aaron Eckhart) and his First Lady (Ashley Judd) from a Camp David retreat. The president was saved, but not the First Lady. A year and a half later, Banning still blames himself for the tragedy but is now confined to desk duty at the Department of the Treasury. During a visit to 1600 Pennsylvania Avenue by the South Korean prime minister, a plane flies into the Washington Monument and Mr. President, along with his advisors, are held hostage in the White House's underground bunker by North Korean terrorists, led by Kang (Rick Yune). Banning survives all the destruction, only to walk in the front door and become the eyes, ears, and fists for the head of the Secret Service (Angela Bassett), a Pentagon general (Robert Forster), and the Speaker of the House (Morgan Freeman). In order for Kang to force the U.S. military out of the Korean Peninsula and detonate nuclear weapons that will destroy the country, he requires the system's access codes and doesn't mind whittling down the hostage count, but Banning is not a man to be underestimated.

As a no-nonsense all-action, all-the-time diversion, "Olympus Has Fallen" moves briskly. Whether it be Fuqua's thrillingly over-the-top staging or just the mere images of terrorism that eerily echo 9/11, the film sets up real urgency and gut-level adrenaline (sans too much unconvincing CGI). The premise is ludicrous in a "one-man-army against terrorists" sort of way, but the stakes couldn't be higher and tyro screenwriters Creighton Rothenberger & Katrin Benedikt don't waste time with many subplots. Banning's wife (Radha Mitchell), a nurse who treats some of the attack victims, wants to spend more time together, and there's the reveal of a White House turncoat who's not hard to pick out from the crowd (although this traitor's reasons involving globalization and Wall Street are sketchy at best). The writers also have setups that turn out to be throwaways. The first scene has Banning boxing with the president, which might play into the action later on but never does, and the President's son Connor (Finley Jacobsen), who's on buddy terms with Banning, is sought out by Kang's men but is rescued rather quickly. Ultimately, though, it's more about Banning stabbing/shooting terrorists and saving the day before Kang kills off every hostage. Bodies explode like in a shooter video game and an Abraham Lincoln bust in the Oval Office is used to amusingly brutal effect.

As Mike Banning (what a name!), Butler gives one of his better performances within his skill set of kicking ass, taking names, and often delivering the kind of wisecracking, John McClane-style threats ("I'm going to stab you through your brain with my knife"). Eckhart is fine as the POTUS, even if he's no Freeman or Harrison Ford and spends much of the film tied up, literally. Freeman and Melissa Leo class things up the most with their gravitas, respectively, playing the Speaker of the House-turned-Acting President and the Secretary of Defense who bravely takes Kang's torture without giving him her access code.

Despite some shameless "God Bless America!" jingoism, complete with a self-serious military drum score, and the cheesy use of a red time clock counting down until millions will die, the film blinds the viewer of its flaws. If you don't give it more thought than the filmmakers, "Olympus Has Fallen" promises undemanding R-rated entertainment without being offensive. Explosion-and-revenge-violence junkies will die hard for this one.