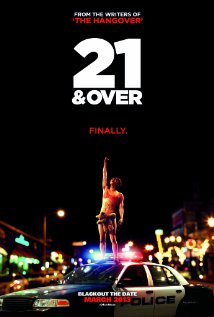 "Weekend at Bernie's" meets a junior-varsity reheat of "The Hangover" in "21 & Over," the directorial debut of the latter film's screenwriters, Jon Lucas and Scott Moore. Nothing more and nothing less than a ribald, immature party romp that embraces political incorrectness would be expected from these two. After last year's shamelessly irresponsible, Todd Phillips-produced "Project X," this should have been a fun, raucous entry in the deathless all-night-party genre with the rite of passage of turning 21 being a springboard for some crazy shenanigans. While not completely scraping the bottom of the barrel, it doesn't bring anything inspired to the party nor does it offer enough boisterous laughs to hope the rager won't end.

The uninhibited Miller (Miles Teller) and the more-responsible Casey (Skylar Astin) surprise their high school pal, Jeff Chang (Justin Chon), on his 21st birthday, the latter hoping to take him out and get him hammered. Trouble is, Jeff Chang (his friends always call him by his full name) has a rigid, authoritative father, Dr. Chang (Francois Chau), who expects him to get up for a med-school interview tomorrow morning. But what could "one beer" hurt, right? Miller makes sure the evening goes on, bar-hopping and feeding Jeff Chang shots until he becomes unconscious. In a "spin" on "The Hangover"—where the wolf pack had to actually locate the best man—Miller and Casey try to figure out where Jeff Chang lives and what has been going on with him, so they spend the entire night finding the address while dragging him around like a dead body. Infiltrating an angry Latina sorority (with pledges that like to be spanked), a late-night pep rally with a stampeding buffalo and belligerent male cheerleaders, and gunplay will ensue. Along the way, Miller might learn that he needs to grow up, being a college dropout and all, and Casey should loosen up a tad, even though he has a good head on his shoulders with a job already lined up on Wall Street after college.

For its entire 93 minutes (which feel way longer), "21 & Over" doesn't slack on being an equal opportunity offender, taking jabs at Jews, Asian-Americans, fraternities, Latinas, and women. Of course, it's all in a gleefully offensive manner, but the real problem is the dopey premise straining itself to annoyance. All of Miller and Casey's "leads" in finding Jeff Chang's address turn out to be dead ends that the journey becomes a real slog. It would be lying to say there weren't any laughs, but it's mostly in the dirty-funny banter that these friends share. Otherwise, the long take of a drunken Jeff Chang chewing a tampon, which he mistakes for a candy bar, probably sounded more amusing when the writing-directing team thought of it drinking hard one night. Same goes for the instant replays of a character protectile vomiting while riding a mechanical bull in slow-motion. Since this is just a raunchy comedy, binge-drinking consequences like alcohol poisoning and hospitalization are shaken off, and it's just as well. Buried beneath all the booze and filth, there is a ring of truth in here somewhere about post-college adult responsibilities and friends losing touch with one another. Certain truths rise to the surface, but Lucas and Moore's attempts at moralizing and introducing dark issues just feel jarring and insincere.

The three up-and-coming leads make the script funnier than it should be with a camaraderie that rings true. Proving to be a real find in "Rabbit Hole" and engaging in the "Footloose" remake, then wasted in "Project X" (no pun intended) but asked to co-carry a whole movie here, Teller seems to be channeling Vince Vaughn's loud-mouthed, motor-mouthed bro persona. His innate charisma and assured comic timing rescue some of the racist and sexist insults Miller spouts off like it's his second nature. Playing the more buttoned-down Casey, Astin ("Pitch Perfect") is a very likable talent on his own and a fine foil for Teller's Miller. As the birthday boy "Jeff Chang," Chon remains blackout-drunk for a majority of the film, and when he's not, he's pretty funny. It's clear he's game for anything, like running around naked with only a bra and a teddy bear glued to his manhood. Also, as sorority girl Nicole, Sarah Wright is an adorable love interest for Astin's Casey with a cool, quick personality to match. When it's all over and you consider its worth, it might make a great drinking game at least; every time someone says, "Jeff Chang," you drink. Otherwise, the juvenile humor will probably hit more often than miss with 21-and-under guys and nobody else. "21 & Over" is a night not really worth remembering.