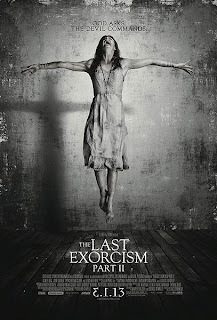 If you thought 2010's "The Last Exorcism" was really the last, your naiveté is really cute. Wasn't "Friday the 13th: The Final Chapter" being followed by six more movies, a mash-up, and a reboot proof enough that finality never exists in the business of horror cinema when dollar signs are involved? Part of what made the first film so effective was its faux-documentary approach being overtaken by found-footage horror tropes; even if it fell off the tracks with an anticlimactic finale, it built a convincing illusion and a frightening amount of dread. This sequel, ill-advisedly titled "The Last Exorcism Part II," creditably eschews the shaky-cam, P.O.V. format for a more conventional sensibility, but lightning can't strike twice. Director Ed Gass-Donnelly, who co-wrote the plodding screenplay with Damien Chazelle, might have wanted to up the ante—isn't that what sequels should do?—but he can't even pull off what made its predecessor work like gangbusters. Instead of reduplicating the unnerving dread and anxiety, "Part II" haphazardly throws in every cheap, schlocky scare tactic in the book, especially flash frames, as if that's all the film has. Fortunately, Ashley Bell sells it again.

After an obligatory recap of the last film, "The Last Exorcism Part II" continues with a startling pre-title opener, where trembling 17-year-old Nell Sweetzer (Bell), the sole survivor of the cult, finds her way into a couple's home one morning. Without blinking and having no memory of the events that have put her in such a catatonic state, Nell is treated at a New Orleans hospital and then gets taken into a halfway house for troubled teen girls, run by an understanding therapist (Muse Watson, remembered mostly as killer fisherman Ben Willis from "I Know What You Did Last Summer"). She knows the demon known as "Abalam" is still out there, but gradually, Nell turns her life around, discovering rock music from her roommate Gwen (Julia Garner, who experienced the powerful influence of a cult in "Martha Marcy May Marlene") and staying productive by working as a maid at a motel. But—dun-dun-dun—she begins attracting attention by masked, hooded figures; a silver living statue tells her, "You've been missed"; and she starts seeing her supposedly dead father, Louis (Louis Herthum). Is the "darkness" really done with poor Nell?

Once a creepy mood is set and we have an empathetic character at the center, "The Last Exorcism Part II" has no real place to go that will convince us of this being the last of Nell and Abalam. With the film's one admirably perverse idea, Nell's seemingly out-of-nowhere relationship with Chris (Spencer Treat Clark), an equally inexperienced boy at work, sparks her sexual awakening, as do the moaning sounds on the other side of a wall inside a motel room she cleans. It's as if Nell is new to the world, opening up her eyes and sense of touch to the sights and feel of New Orleans' Mardi Gras celebration (the few times Brendan Steacy's cinematography actually gets to stand out). Beyond just obeying the obligations of her contract, Bell bravely conveys a vulnerable, shell-shocked state and an earnest turnaround with the best of them. This time around, Nell has a surprisingly touching arc, and it's all because of the strong, nuanced actress playing her.

When it's not trying to get scares (the story proper's first scene being about the extent of actual chills), "The Last Exorcism Part II" works more effectively as a dramatically compelling character study. The rest of the time the film relies on loud, bombastic, seat-jolting music cues every time a character pops into the frame, a dog barks, or a staticky radio sounds suddenly. Even Michael Wandmacher's suspense score is the generic, interchangeable sort from any TV movie. And in order to obey the PG-13 rating restrictions, the horror sequences are spinelessly cut with flashbacks, which is a surprise given that gore-happy Eli Roth produces again and should have had an upper hand.

Then there's the final third's exorcism sequence, which conveniently brings in a voodoo priestess (Tarra Riggs) to Nell's aid and turns up the hysterics that you expect Lisa Bonet's character from "Angel Heart" to turn up and slice off a chicken's head. Finally, there's a cute visual bit involving the boots Nell inherited from the first film, and not to spoil the party, but the final frame could very well be a setup for the remake of "Carrie" or just a "Part III." Were it not for Bell seizing the role, this would be a crashing bore, but you have seen it all before anyway.