Cold, anemic "Antiviral" nothing but a germ of an idea 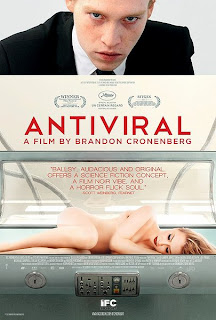 The apple doesn't fall far from the tree in "Antiviral," the feature debut of Brandon Cronenberg, son of David. As should be expected from anyone with the surname of the King of Venereal Horror, the film is icky and strange, daringly sick and emotionally icy. At the front is an intriguingly out-there germ of an idea for a vicious satire about celebrity mania, but considering this film's conception came from a short by the writer-director himself, it's just an idea in search of a story.

In a dystopian society, the public is obsessed with the rich and famous. They are so obsessed, in fact, that to become more connected with tabloid celebrities, clients willingly pay a pretty penny at Toronto's Lucas Clinic to be injected with samples of viruses and illnesses their idols have endured. Who wouldn't want to carry Kim Kardashian's herpes? There is even a meat market, where people can buy celebrity muscle cells to eat like meat cuts. After hours, technician Syd March (Caleb Landry Jones) smuggles the illnesses and sells them on the black market. When tabloid starlet Hannah Geist (Sarah Gadon) allegedly dies after an illness, the infected Syd has Geist's latest bug and is on his way to his death bed.

If nothing else seems to be going for this corporeal-horror twaddle, the fiercely independent Cronenberg makes quite an entrance, visually speaking. Seen through a clinician's eye and sleekly mounted with Arvinder Grewal's production design, the film is like a sterile, brightly lit canvas—for instance, Syd's spare, snow-white apartment—so it can grow darker and then later be stained with blood. A chip off the old block, Cronenberg Jr.'s aesthetics are as stunningly precise as Daddy's oeuvre. E.C. Woodley's industrial score also sets a hypnotic, unsettling tone.

Jones, a distinct-looking specimen not unlike Crispin Glover and Brad Dourif with intensely scary eyes and a traffic-stopping scowl, does impress with his breakout role here. But for such a coldly detached, unsympathetic protagonist who is intentionally written as a cipher with unclear motives, it's hard for the audience to get invested in Syd's clammy plight. Gadon, whom the director borrowed from his father's "A Dangerous Method" and "Cosmopolis," is mostly just a beautiful face that gets to cough up blood. Malcolm McDowell and Wendy Crewson also turn up in enigmatic roles with enough jargon to speak.

There are so many pointlessly repetitive close-ups of syringe needles being injected into veins, almost to the point of fetishization, that what Cronenberg says in the first act isn't terribly clear by the third act. Since the satirical ideas are thrown on the back burner, the film is just a confidently designed exercise many degrees shy of being the deep-dish satire it wants to be. "Antiviral" is never not stylish or bizarro, but it is too listless, off-putting, and narratively anemic to engage on a deeper level. Perhaps the Cronenbergs should take a break from the human body, unless it involves the brain, the eyes and the heart.