Disappearing Act: "Now You See Me" a fun diversion until you realize you've been had 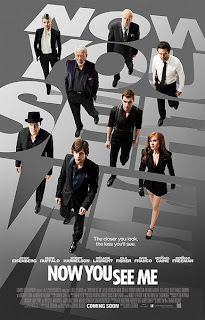 If you need to see one movie about magic this year, it's a horse apiece between the disappointingly limp comedy "The Incredible Burt Wonderstone" and "Now You See Me," a lightly clever but only passable early-summer diversion. Directed with some relative get-up-and-go by Louis Leterrier (he of the first two "Transporter" movies, 2008's "The Incredible Hulk," and 2010's "Clash of the Titans"), this magic-centric caper sports a first-class ensemble to play with a neat premise that's let down by a half-baked screenplay spread too thin with characters being duped and then other characters explaining how they pulled it off. Even for a dumb throwaway, it just pulls out too many rabbits for its own good.

Smug card sharp Danny (Jesse Eisenberg), delusive mentalist Merritt (Woody Harrelson), escape artist Henley (Isla Fisher), and lock-picking pickpocket Jack (Dave Franco) have all been invited to the same decrepit NYC apartment by a mysterious, hooded puppet master. A year later, the group becomes "The Four Horsemen" and put on Las Vegas shows, backed by wealthy mogul Arthur Tressler (Michael Caine) at the MGM Grand. For their closing act, they aim to rob a bank; in fact, a French audience member is teleported all the way to his bank vault in Paris, only to shower the entire arena with $3.2 million Euros. With no hard evidence linking them to the heist (because magic is not real — sorry to tarnish your childlike beliefs), magic skeptic/FBI Agent Dylan Rhodes (Mark Ruffalo), partnered up with Interpol desk officer Alma Dray (Mélanie Laurent), can't keep them in custody so they follow them on their tour to New Orleans and Manhattan. Meanwhile, magician debunker Thaddeus Bradley (Morgan Freeman) stays steps ahead of the agents and shows the cops how the Horsemen's trick is done. With a little sleight of hand and some outside help to finangle a heist that means ripping off the $140 million-worth Tressler and giving his money to those who could use it, the Horsemen are capable of something much larger.

Directly off the top, "Now You See Me" gets off to a fun, breezy start, introducing its quartet and fleetly bopping between each of their acts. Unfortunately, after that sequence, director Louis Leterrier and screenwriters Ed Solomon, Boaz Yakin, and first-timer Edward Ricourt make the ill-advised decision to keep the focus largely on Rhodes and Dray's uninteresting partnership and structure the film like a house of cards so elaborately contrived and gimmicky that, had everything not fallen into place at the exact moment, would collapse before our eyes. And collapse, it does. The writers make a guessing game out of who might be the "fifth horseman," but cockamamie stuff with a secret organization called "The Eye" and magician Lionel Shrike overcomplicates things. As the characters constantly remind us, "the closer you look, the less you see," there's a lot less substance here than meets the eye and nothing can be held up to close scrutiny. When sticking to the showmanship, tricks, and misdirection, the film is entertaining enough, but behind all the smoke and mirrors, "the prestige," if you will, is a silly letdown and makes the whole enterprise (as well as suspension of disbelief) go up in smoke by the end.

The Four Horsemen are diverting hucksters, colored by talented actors, but more's the pity that the characters are barely-there and never grow out of supporting status. Jesse Eisenberg, playing a cocksure, quick-witted womanizer and (again) the smartest guy in the room, and Woody Harrelson are both fun to watch. Isla Fisher shows some flair in an early bit, where she's handcuffed in a water tank with piranhas timed to fall in after her, but thereafter, she's just Danny's ex-assistant/girlfriend relegated to wallpapering. Dave Franco has a smirky, devilish spark that feels unfulfilled here, until given the chance to deliver the moves in a cool brawl involving a garbage disposal, flash paper and sharp card-throwing. Michael Caine and Morgan Freeman are allowed to just have fun, even if they're there to merely class things up, but as the wrong protagonists of the story, Mark Ruffalo and Mélanie Laurent are barely given anything to play.

Considering movies themselves have been illusions since The Lumière Brothers came along, stage magic seems to lose its "ooh" and "aah" factor on screen, especially now with editing and special effects. Here, there's a discrepancy between what we see (a character floating around in a bubble, holograms jumping off a building and exploding into cash, bank account balances magically increasing, etc.) and what's explained to us that making the Horsemen genetically enhanced superheroes or Hogwarts alumni would've made it easier to swallow. Director Leterrier often strains for energy with an ever-roving, often dizzying camera. A chase sequence through the New Orleans streets, shot with a herky-jerky shooting style, is more chaotic than exciting, even losing sight of the spatiality of the action so we can't figure out where the magicians are in relation to the authorities. "Now You See Me" offers up some on-stage "how did they do that?" razzamatazz here and there, but once the final trick is revealed to be on the audience, presto! Now you see it, now you don't.