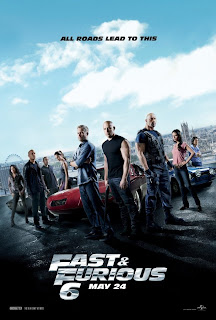 Universal Pictures is probably laughing all the way to the bank because it's unfathomable how "The Fast and the Furious"—remember, 2001's unpretentious, is-what-it-is drive-in summer movie with hip-swaggering babes, muscle heads, and fast muscle cars—has spawned such a lucrative franchise. They've hit six and, by the reports of a seventh one already slated for next summer, this series isn't running out of gas anytime soon. No improvement has been made on the naming of these movies, going from plainly stupid to awkward and grammatically illogical with the adding of numbers and dropping of articles ("2 Fast 2 Furious" and "Fast & Furious," anybody?), but they've definitely improved, starting as routine underground drag-racing/truck-hijacking pictures and inflating themselves into globe-trotting heist-with-superheroes action extravaganzas. The fifth time was the charm (2011's "Fast Five"), and now with "Fast & Furious 6" (or, going by the title card, just "Furious 6"), it suffers from skid-mark pacing before firing up and delivering all the high-octane bombast and fun stuff this cheerfully lunkheaded series thrives on.

After making $100-million from their Rio de Janeiro heist in "Fast Five," Dom Toretto (Vin Diesel, with his baritone voice and biceps as large as his neck) and his team have retired all around the world. His bro-for-life, Brian (Paul Walker), is living a life of solitude in the Canary Islands with Dom's sister, Mia (Jordana Brewster), and their newborn son. Once Agent Hobbs (Dwayne Johnson) tracks down Dom, who's settled down with Hobbs' former partner Elena (Elsa Pataky), he gives the bald, jacked criminal a new job that is personal and won't be refused. If you remember in the post-credits stinger (as if leading to "The Avengers"), Letty (Michelle Rodriguez), Dom's presumed-dead lover, is still alive and kicking, albeit with amnesia and working for ex-military madman Owen Shaw (Luke Evans). It doesn't matter in the slightest, but Shaw and his crew possess a dangerous chip, which is such a McGuffin that it might as well be a file or microfilm. Despite Dom growling about his old life being done, he prioritizes: "You never turn your back on family, even when they do." Hobbs agrees to pardon Dom if he gets the gang back together and they do what they do best, while also bringing Letty back into the fold.

Considering tight, engaging plotting and three-dimensional characterization have never been this franchise's bread and butter, there's little reason to start now. When it's cutting to the literal chase and embracing its big, dumb, ear-ringingly loud self, "Furious 6" ends up being more fun than it deserves to be. Behind the wheel for his fourth consecutive "Fast & Furious" movie, director Justin Lin doesn't try to reflect reality in any of the action sequences, and he's better off that way. However, spread over a keep-on-chugging 130 minutes, the script by hard-at-work screenwriter Chris Morgan still hopes we have a connection with these cardboard cutouts and their unity as a hot-rod-obsessed family. Dom and Letty's reunion, where he lets her in on the history of her body scars, just doesn't hold much dramatic weight or rooting interest.

Is the acting even worth mentioning? Vin Diesel and Paul Walker do what they do with their minimal skill sets, and there is some amusement in the interplay between members of the gang, including comic relief Roman (Tyrese Gibson), Tej (Chris 'Ludacris' Bridges), and couple Giselle (Gal Gadot) and Han (Sung Kang). If the charismatic Dwayne Johnson was brought in for "Fast Five" to add an extra shot of macho, he gets to do more baby-oiled, where's the gym? posturing and even destroys an Interpol interrogation room this time. Gina Carano, as Hobbs' right-hand partner Riley, doesn't get to do much initially and comes off even more stiff when Steven Soderbergh isn't guiding her performance (2012's "Haywire"). But then she shows her jaw-dropping mixed martial arts prowess in a London subway station, where she and Rodriguez have an intensely brutal throwdown. It might be the most kick-ass girlfight, sans make-out session, that you'll ever witness on screen. Finally, Luke Evans fulfills the sniveling requirements of baddie Shaw, but the real bad guys have always been instantly forgettable in this series anyway.

Other than Brian and Dom's opening race to get to Mia's baby delivery in Spain, a high-speed pursuit through the London streets, and a drag race, one must sit through a lot of downtime, plus a pointless 11th-hour twist of members swapping sides, to get to its 45-minute action climax of logic- and death-defying stuntwork and adrenalized thrills. When the goods finally arrive, the two enjoyably ludicrous and ludicrously hectic set-pieces not only go over the top but blow off the top, almost to the point of self-parody. First, Dom's team tries defeating Shaw's army convoys and a tank on a bridge, and then Letty flies through the air, only to be rescued by Superman, er, Dom. Then, shortly after, a number of vehicles surround a cargo plane barreling down a loooong runway as if it exists in the "G.I. Joe" universe. All logic is dwarfed, and that's preferable over hearing "good" criminals clunkily harp on the importance of family and saying grace before eating barbecue. Like a salty food full of trans fats, "Furious 6" isn't good for you (it's pretty enervating) but, as a popcorn-munching no-brainer for the series' undiscriminating fans, it may do the trick. Your best bet is to just set aside everything you learned in physics, like the laws of gravity and stuff, and pretend you're watching a live-action cartoon.