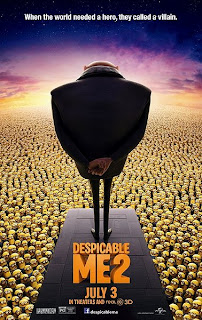 Sneaking up on audiences in 2010, "Despicable Me" was a charming and unexpectedly witty little surprise that made a not-too-shabby $251 million for its domestic gross. Naturally, if a movie makes buckets of money, that calls for a cash-grab sequel, which obviously can't match the same lightning-in-a-bottle freshness and cleverness as its predecessor. Case in point: "Despicable Me 2" may not be much, but it's colorful, funny, and hardly objectionable. The same team of co-directors, Pierre Coffin and Chris Renaud, and screenwriters, Ken Daurio and Cinco Paul, return for more and were wise enough to give us more of the Minions, the major selling point of the original. Those cute yellow, square-shaped little guys work well in small doses but never grate with more screen time.

Supervillainy is afoot in the Arctic Circle-set opening, as an intelligence team and everything else (save for a porta john and its user) are pulled into the sky by an unknown magnetic force. Yes, Gru (Steve Carell) is back, but the bald supervillain who stole the moon has now settled down as a family man with his three adopted daughters, Margo (Miranda Cosgrove), Edith (Dana Gaier), and Agnes (Elsie Kate Fisher). As he's turned to making tasteless jelly and jam in the basement with his Minions and Dr. Nefario (Russell Brand), enthusiastic, ultra-competent Anti-Villain League agent Lucy Wilde (Kristen Wiig) uses her "lipstick taser" and kidnaps him. Recruited by the AVL, headed by the pompous, jaw-joweled Silas Ramsbottom (Steve Coogan), he's back in the game to take out the mystery villain who's using the serum PX-41 to turn any living thing into a mindless killing machine. Gru and Lucy pinpoint the location of the serum in a mall, so by posing as owners of a cupcake shop called "Bake My Day," they can hopefully find the mastermind.

Because Gru is softened and made to be less devilish and, well, despicable, the film is blander than before. However, for an animated sequel, it's no less entertaining and heartfelt. Steve Carell is still wonderfully spiky and sweet as the Russian-accented Gru, who is capable of loving and will do anything for his daughters, to the point of dressing up as a fairy princess for a birthday party, and still gets to show dashes of his mean villainy. Said Minions get more to do here, even as they're secretly being snatched away and sucked up by an ice cream truck before turning into the baddie's army of purple, toothsome gremlins that eat everything in sight and wreak havoc. When they are on screen, the chattery, cheerfully goofy buddies effortlessly steal the show—one vacuums in a maid uniform and, when held on an island, one is in a coconut bra, eating a banana, and another bares his yellow behind—and as their capping performance, they sing All 4 One's "I Swear."

Typically, stunt casting can distract from the story, but here, the supporting cast is perfect. Elsie Kate Fisher is, in one word, adorable as youngest daughter Agnes, making anyone with a soul melt into a puddle of mush. Though she played foster mom Mrs. Hattie in "Despicable Me," Kristen Wiig's vocal work as Lucy is so likable and daffy that you can practically see the actress performing the Lucille Ball-esque physicality of her lanky animated counterpart. As Mexican restaurant owner Eduardo Perez, really known as El Macho, Benjamin Bratt has some gusto, but the character is a pretty stereotypical villain, especially when compared to the first film's Vector, so eccentrically voiced by Jason Segel. Also, Kristen Schaal uses her overall quirkiness to enjoyable effect in voicing the small part of Shannon, a gum-chewing, exercise-obsessed floozy whom Gru gets set up with on a date.

It's almost a predictable statement, but nevertheless, "Despicable Me 2" looks terrific, with its animated characters' physical attributes exaggerated in the best way. There are enough threads (i.e. Margo falls head over heels for El Macho's son, little Agnes wants a mother, etc.) in Daurio and Paul's script to deem it an unfocused, overstuffed sequel but all eventually fuse together. As far as the comedy goes, much of the humor is derived from antic slapstick, which will go over better with viewers under the age of twelve. And yet, there are just enough lines and sight gags to earn chuckles for those with attention spans higher than a gnat. Funnier and more charming than most babysitters, "Despicable Me 2" is as easy to like as it is easy to forget, but at least it's brisk and energetic. If Universal Pictures and Illumination Entertainment insist on a spin-off, bring on even more Minions.