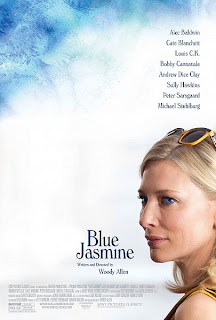 If you're keeping score, we're right on schedule — Woody Allen's forty-third film is here. When one considers that 77-year-old writer-director Allen churns out a film every year with regularity, he may not consistently be like a good wine, rehashing neurotic characters, marriage foibles, and extramarital affairs throughout his oeuvre. Whereas 2011's "Midnight in Paris" was romantic and whimsical, and 2012's "To Rome with Love" pleasant enough but trifling, "Blue Jasmine" is his most tragic and emotionally powerful film in a long while. Whether it can attributed to taking himself out from in front of the camera, getting away from New York for a little bit, or just getting a knockout performance out of Cate Blanchett and great work from the ensemble, the auteur's latest has the impact that's been missing from some of his lighter previous ones.

"Blue Jasmine," though dryly and uncomfortably witty throughout, is not the film you would expect from the Woodman but a fascinating, penetrating character study that dares you to care about the snobby, pampered, ultimately damaged Jasmine (Cate Blanchett). When we first meet her, the self-involved Jasmine is talking the ear off of a woman sitting next to her on an airplane flight all the way to the baggage claim. Arriving in front of a San Francisco apartment that looks like a comedown from what she's used to, she's frazzled and desperate and there to see her adopted grocery-working sister, Ginger (Sally Hawkins), and drops the news on her that she needs to stay there for a while. Occasionally zoning out and talking to herself, Jasmine wastes no time treating herself to some Stoli, popping Xanex, and complaining about her broke financial status, despite her Louis Vuitton luggage.

Having changed her name from Jeanette to Jasmine, she had her cushy socialite life upended when discovering her smooth financier husband Hal (Alec Baldwin) had been engaging in affairs with multiple women (an au pair included) and was then arrested for a Ponzi scheme, which also left Ginger and then-husband Auggie (Andrew Dice Clay) up the creek. She doesn't approve of her sister's present mechanic boyfriend, Chili (Bobby Cannavale). Without knowing how not to be rich and high-maintenance, she has never worked a day in her life, giving a dentist's office receptionist position a try before Dr. Flicker (Michael Stuhlbarg) forces himself on her, and then decides to embark on her career as an interior designer. Problem is, she has no money and no computer skills, so she signs up for a computer class in order to take an online design course. It's not long before Jasmine finds herself a substantial, eligible man in the well-to-do Dwight (Peter Sarsgaard) who's unaware of her tribulations.

Deftly flipping back and forth between Jasmine's life before her nervous breakdown to now, "Blue Jasmine" paints a portrayal of a three-dimensional character who's falling apart right before our very eyes. Jasmine may be condescending and snappish, but her problems are no longer of the first-world variety, her fragility and formerly financially secure life sinking her as a person. We also see the bicoastal contrasts between Jasmine, who used to hold fancy dinner parties with Hal in their Manhattan abode and spend weekends in the Hamptons, and Ginger, who lives comfortably in a charming little nest with her two boys.

It's no small feat for an actor to turn an unpleasant and irritating but fully fleshed-out and absorbing character into one to worry about. Blanchett does just that with exacting complexity in her richest, most shattering work to date, giving herself to Jasmine and understanding who this woman is and what makes her tick. Surrounding her is excellent character work all around. Sally Hawkins is just wonderful, a truly relatable delight as the working-class Ginger; Baldwin plays this kind of slick operator in his sleep, only without sleeping on the job, as Hal, whose Bernie Madoff-like machinations led to digging his own grave; and Andrew Dice Clay (yes, Andrew Dice Clay) shows a surprising depth in his resentment as Augie, Ginger's ex-husband who was taken advantage of by Hal. There's even a low-key role for Louis C.K. as Al, a sound engineer who interests Ginger.

"Blue Jasmine" is pitch-perfect every time. Both Allen and Blanchett bring a lightness to this devastatingly tragic character without ever sugar-coating her flaws and eccentricities, complemented by Javier Aguierresarobe's luminous cinematography and a sublime ragtime-blues soundtrack ("Blue Moon," the golden standard Jasmine remembers playing when she first met her husband, figures in). Connecting with Tennesse Williams' Blanche DuBois, Jasmine is the kind of woman you believe could exist and, heck, probably does exist, talking to herself on some bench somewhere.