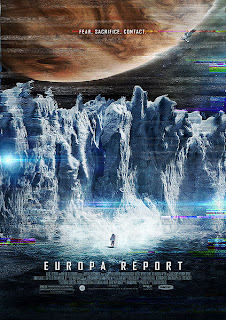 Who are we? Why are we here? Where do we come from? And, most importantly, are we alone? These tough existential questions are probed by many representatives of the science-fiction genre, most recently Ridley Scott's "Prometheus." The sci-fi found-footage procedural "Europa Report" does the same, but while we have a commendably cerebral and technically elegant achievement, it's not a film with any lingering impact. The scope is contained but director Sebastián Cordero spent his dollars wisely in creating a tangible space out of a Brooklyn, NY, soundstage and Philip Gelatt's script manages to maintain scientific accuracy and convey the heroism and sacrifices of space exploration. Just because a sci-fier has been made on a lo-fi scale does not mean it has to either be SyFy Channel-ready schlock or a Big Event. Unfortunately, this low-budget slow-burn ends up promising more than it delivers.

"Europa Report" is presented as a documentary spliced together with on-ground interviews and the space vessel's mission feed. It purports that Europa One Mission was the first attempt to send men and women into deep space. For sixteen months after the crew's feed went dark, CEO Europa Ventures lead mission planner Dr. Samantha Unger (Embeth Davitz) wonders what actually happened. Once the recorded footage goes 19 months, 10 days, 14 hours earlier when the Europa One spacecraft launched, we follow six astronauts—among them, homesick chief science officer James Corrigan (Sharlto Copley), mission chief William Xu (Daniel Wu), navigator/archivist Rosa Dasque (Anamaria Marinca), Andrei Blok (Michael Nyqvist), Dr. Daniel Luxembourg (Christian Camargo), and Dr. Katya Petrovna (Karolina Wydra)—as they hope to discover that life exists on Jupiter's glacial moon Europa. When something happens to one of the engineers, the rest of the crew has no other choice than to continue their mission.

Opting for naturalism by a mostly unknown international ensemble (save for "District 9" actor Copley and Swedish thespian Nyqvist), the characters on board the ship feel like real, nondescript people, Copley hitting a poignant note in a pivotal moment as his morale crumbles. By the same token, none of them are really individualized beyond "mission-minded," so it's hard to have any deep emotional investment in these people. On the positive, the visual effects (a zero-gravity maiden voyage, in particular) are accomplished and Bear McCreary's subtly throbbing string-synth score mixed into the sound design helps when the film catches cabin fever.

Those expecting another found-footage item that relies on shaky-cam epilepsy (it's only baby steps ahead of 2011's "Apollo 18" in terms of overall quality) will respectively be appreciative and then somewhat disappointed. Bearing in mind that its audience has enough patience, "Europa Report" builds with a deliberate, often mundane, calm and plenty of convincing scientific shoptalk before things escalate 45 minutes in. Even then, it never really kicks into high gear but some tension stems from situations the characters face rather than showing us exactly what they see. Yes, there is a discovery below the ice but not enough of a payoff for the viewer to feel he or she has seen a concept fully explored.