DVD/Blu-ray: "Curse of Chucky" no great shakes 'til the end 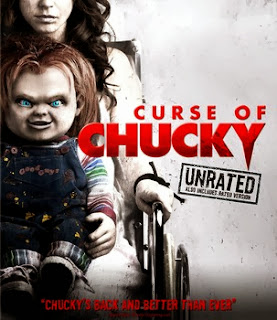 Twenty-five years ago, the insidiously creepy horror thriller "Child's Play" made history, turning 6-year-old Andy Barclay's Good Guy doll Chucky into a pint-sized killer and a genre icon as identifiable as Santa Claus. It's still the A-1 in Chucky's "serious horror" legacy. As a malevolent two-foot-tall doll would inevitably prove to be less frightening as the sequels pressed on in the early '90s and he was turned into a demented wisecracker not unlike Freddy Krueger, 1998's "Bride of Chucky" took the most logical next step for the increasingly absurd series. It embraced the inherent goofiness and punched up the gruesome kills with a wickedly tongue-in-cheek sense of humor and a terrifically trashy performance from Jennifer Tilly. By the time the tacky-fun "Seed of Chucky" came around in 2004, it carried over its predecessor's outrageously tawdry tone and pushed even further into a gleefully self-aware satire with Tilly's very game reprisal. So, for those keeping track at home, Chucky went through two families while leaving a trail of bodies, terrorized a military academy, got married, and had a baby. What's next for the immortal Chuckster? Every horror lover's little "Good Guy" may be back, but better than ever? Sadly, no.

"Child's Play" creator Don Mancini's sixth time penning and second time directing Chucky's reign of terror and subsequent comic one-liners, direct-to-DVD/Blu-ray sequel "Curse of Chucky" is a slick-looking slash-fest that goes back to its straight-faced roots. Its one relatively clever wrinkle is that it faithfully circles back to the first film's origins with Charles Lee Ray (Brad Dourif), Chicago's "Lakeshore Strangler" serial killer whose soul inhabited the mini, plastic body by way of ritual voodoo. In a novel bit of casting, Fiona Dourif—the daughter of Brad, who will forever be the voice of the cackling, malevolent killer doll—plays Nica, a paraplegic who was unable to complete her college psychology thesis and is back to living in a big, old Victorian house with her overprotective painter mother (Chantal Quesnelle). The night after they receive a packaged doll at their door, Nica finds her mother dead in a pool of blood. Of course, it's seen as a suicide because why would anyone suspect a mysterious doll who's headed his own popular horror franchise since the late-'80s? When Nica's calculating older sister Barb (Danielle Bisutti) arrives with her dysfunctional family, daughter Alice (Summer Howell), husband Ian (Brennan Elliott), and live-in nanny Jill (Maitland McConnell), the ginger-haired, freckle-faced doll wants to play a game of "And Then There Were None."

Solidly scored with that horror-tinged, twinkly innocence and atmospherically shot for a non-theatrical release, "Curse of Chucky" has a whole Agatha Christie feel, being set in a gothic, spooky mansion during a thunderstorm (perhaps for budgetary constraints). The term "old school" gets thrown around like it's going out of style, but that is the approach here. Even a sequence involving a bowl of rat-poisoned chili is unbearably prolonged and an electrocution feels tame by today's standards. Writer-director Mancini knows his menacing doll inside and out and seems to have all the ingredients to make an effective or just plain fun horror movie, but he can't really get the viewer's ticker going, despite some jump scares, and the murder sequences are well-executed but nothing to scream about. At least "Seed" wasn't even trying to be scary. Unfortunately, all of the tired genre stand-bys get checked off here unironically, including the characters having no cell phone service (which was never a problem in the times of "Child's Play"), the opening of a shower curtain revealing (gasp!) nothing, and a rat in the attic giving someone a fright.

Taking almost 45 minutes to really get the ball rolling, which is frustrating since the audience is already three steps ahead of Chucky's targets, the movie isn't without some highlights overall. The mostly practical effects with latex and doll puppetry are fairly choice, and there are stylish visual flourishes (a character's reflection in a moving puddle of blood/a kitchen knife and a B&W flashback contrasted with colored sunflowers). Most of Chucky's one-liners evoke the devilish charm he once had, too. For instance, to one unlucky lady, he quips, "Women. Can't live with them. Period." and then, to the wheelchair-bound Nica, he jokes, "You're the last one standing…so to speak." Dourif acquits herself quite well as strong, sympathetic heroine Nica, who uses her dead legs to her advantage. Bisutti ("Insidious: Chapter 2") is deliciously bitchy as the backstabbing Barbie (get it?), her lips perpetually layered with lipstick even when she goes to bed. But the rest are just fodder for Chucky's sharp weapons and Howell's Alice is gone for the last half. Also, if any self-respecting fan is initially put off by Chucky's new facelift, there's a surprise to come of that. Then, as things come to a seemingly anticlimactic close in the dark house and a nanny cam is left dangling as evidence, Mancini leaves the best stuff for last with an Easter Egg or two for Chucky completists. As a couple of friends from the past appear in the giddy last five minutes and a crowd-pleasing post-credits tag, it's just too bad everything beforehand mostly gets in the way.

Lower your expectations and "Curse of Chucky" might be competently entertaining anyway. Although it might find its place around Halloween if nothing else is available (such a situation is grasping at straws), this Chucky-come-lately return is just another nail in the series' coffin, serviceable enough in delivering the gory goods but actually a comedown from the ridiculously junky but more perversely clever "Seed of Chucky." Chucky might be your friend 'til the end, but the sixth time—and the 25th anniversary—isn't really the charm.