Things to Do in a Spooky House When You're Dead: Novel premise only makes for adequate mystery-chiller in "Haunter" 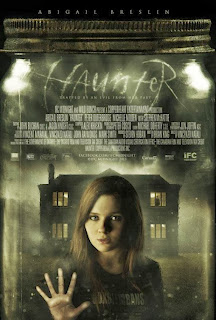 "The Sixth Sense" obviously goosed the "I'm already dead" twist in the supernatural horror subgenre, but director Vincenzo Natali and writer Brian King show their hand early on in "Haunter," a classy, atmospheric, densely constructed mystery-chiller that, in reverse, ends up being more interesting in its journey than in its destination. Natali has proven to be a promising genre talent whose directorial filmography never treads one note, from 1997's imaginatively cool "Cube" being about the imprisonment of strangers inside an endless maze of interlocking cubical chambers and 2009's alternately intelligent, squirmy, and bat-shit crazy "Splice" taking on a scientists-tampering-with-nature premise to provocative heights. To get a handle on what his latest film wants to be, if "Groundhog Day" merged with "The Shining" and "The Others," it'd look something like "Haunter."

The year is 1985, during the Reagan Era, and it's the day before angsty Lisa Johnson (Abigail Breslin) turns sweet 16. She wakes up to the voice of kid brother Robbie (Peter DaCunha) on a walkie talkie, telling her he's found treasure. Lisa's mother Carol (Michelle Nolden) makes pancakes for breakfast and then tells her daughter to do the laundry, which Lisa begrudgingly follows through on because no matter how many times she tells her parents, clothes keep going missing. The fog is so thick outside that the sour-faced teen has to stay in with her All-American family, while the phones are out and father Bruce (Peter Outerbridge) hopelessly tries fixing their station wagon in the garage. After that, it's macaroni and cheese for lunch and meatloaf for dinner, and time for Lisa to practice the same piece from "Peter and the Wolf" on her clarinet, while her family watches "Murder, She Wrote" downstairs. Day after day, Lisa is stuck with a dire case of déjà vu because, well, she and her family are dead, but her parents are the last to realize it. A repetitive loop becomes the least of her worries when she starts noticing major changes in the routine and then starts following the breadcrumbs. Thanks to an unscrupulous alleged worker (Stephen McHattie) from the phone company, Lisa learns that she shouldn't open doors that were meant to be closed, but it's too late for that.

With its distinguished conceit inverting the supernatural trope of the invisible living haunting the visible dead "Beetlejuice"-style, "Haunter" could be deemed to be one of the more compelling permutations in the sometimes rote supernatural horror sub-genre. From its graceful calligraphy title sequence that follows a butterfly through a basement of jars on shelves and overall disinterest in relying solely on musical stings synchronized with jump scares, this ghost story has the exceptional atmosphere down and is most absorbing as a morality-cum-mortality tale from the point-of-view of a teenage girl who's frustrated to keep repeating the same day without escape. As the understandably disaffected Lisa, Breslin is quite good, being up to the task of carrying an entire film and opening herself up emotionally. Nolden and Outerbridge are fine with what they have to do as her parents, but the latter is less convincing when he has to go over the top. No matter, the scraggly McHattie (he of 2009's little-seen but very worthwhile not-really-zombie pic "Pontypool") picks up the pieces, coming off downright creepy in defining the role of "The Pale Man."

Stuck in the house, so to speak, the film is a delightfully spooky chamber piece that draws you in with its methodical pacing and occasionally amusing details. It's more effective when it's being this in the first half and, in the last quarter, there's a set-piece shot as an old movie, but, once all the pieces of the puzzle start getting sorted out, it shifts into an adequate, needlessly complicated, and unfortunately hokey Nancy Drew story resembling the authorship of R.L. Stine. In dramatizing the metaphysical world, director Natali achieves less eeriness when overdoing the strobe-lighting effect, and a few poorly digital exterior shots around the Johnsons' fog-enveloped house tend to betray the film's old-fashioned look and approach. Also, the last scene is more treacly than it needed to be. An exception to the rule that most tame, gore-free PG-13 horror films have to be kid-gloved and lame, "Haunter" isn't that bad, but it won't prevent one from getting a good night's sleep, either.