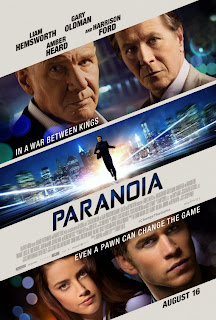 Reeking of the "wheeling out the trash" month of August, "Paranoia" is a watchably slick but forgettable and mockingly rote time-waster, a so-called "high-stakes thriller" set in the zeitgeist that fails at corporate-backstabbing intrigue and thrills. It's one thing if a popcorn thriller isn't original, which "Paranoia" definitely is not, but it's another thing when a thriller is unthrilling, which it's not, either. Even the title is wrong, as a sense of paranoia peters out pretty quickly. The only sense one gets is that time won't be well-spent with a vapid programmer that ends up being a blip on the cast and filmmakers' filmographies.

Living in Brooklyn as a bridge-and-tunnel guy, 27-year-old Adam Cassidy (Liam Hemsworth) is an entry-level inventor for a smart phone corporation. After standing up to the self-aggrandizing billionaire boss, Nicolas Wyatt (Gary Oldman), during a pitch that gets he and his team fired, he takes them out for a night at the club, charging $16,000 to the company's credit card. In the morning, Wyatt's thug (Julian McMahon) finds him and gets him to spy and steal trade secrets from another empire, Eikon, run by former mentor and present rival Jock Goddard (Harrison Ford). If Adam gets Wyatt what he wants, his friends will be compensated with jobs, but first, he needs to look the part in tailored suits and his own modern-chic apartment. When the young stud eventually wants out, Wyatt isn't going to let him off that easy as a pawn. Adam learns the hard way that he should've been careful what he wished for and that the lights aren't always brighter from across the river.

After the irresistible and unexpectedly smart "Legally Blonde" (his 2001 feature debut), director Robert Luketic has kicked out some middling ("Monster-in-Law," "The Ugly Truth") but, in some cases, underrated fare (primarily "Win a Date with Tad Hamilton!"). Though a technically polished studio movie, his latest might be his worst (even compared to the not-as-putrid-as-everyone-says "Killers"). When staticky visual flourishes are added to a few okay chase scenes, he's clearly overcompensating for the utter lack of excitement. Dutch composer Junkie XL's buzzy score does all the work for naught, and there are pleasing uses of Empire of the Sun's "Alive." Based on Joseph Finder's novel and perfunctorily written by Jason Hall and Barry L. Levy, "Paranoia" is competent for a beginning moviegoer's first corporate espionage thriller—think of it as "A Thriller for Dummies," or a cable movie, if you will. But, if you've seen "Wall Street," "The Firm," "Boiler Room," "Antitrust," "Limitless," or any of the umpteenth young-buck-enters-the-dangerous-corporate-world movies, this one is so naïve, by-the-numbers, and half-baked that even its final plot twists can't make up for the feeling of déjà vu. Adam is at least given a life outside of the plot, having friends (Lucas Till, Angela Sarafyan) and supporting his dying-of-Emphysema blue-collar father (inexplicably played by Richard Dreyfuss, who's come to mostly sit around a lot). He might be a smart young man when it comes to computers, but after Wyatt reveals that his father's house has been bugged, Adam is angry when he discovers that he's being watched in the apartment he's been handed, pulling out silverware drawers and taking a baseball bat to his flat screen TV. Even after the FBI visits Adam's house with pictures of his now-dead co-workers, that detail is sloppily forgotten about in the end. As you can probably gather, there's very little that holds onto any internal logic or common sense.

Hemsworth more than capably fills a snazzy suit, though he feels a touch out of his range as a techie and is quite uninvolving as the protagonist. Despite being early in his career, the actor could have it rough distinguishing himself between brother Chris and getting out of the hunky flavor-of-the-month category. The vivacious Amber Heard is the genuine package, knowing just how to play smart and sexy. Here, as a brunette prize to be won, she's better than the empty-vessel part of Emma, a strong-willed Yale graduate who works for Goddard and snuggles up to Adam. Without a mustache to twirl, a disinterested-looking Oldman gets one note to play and chews scenery as the big, bad Wyatt. Ford tries a little harder as Goddard, who's lost his son as Adam has lost his mother, and when the two big-screen stalwarts finally get to go nose to nose and bark at each other after Ford kicked Oldman off his plane sixteen years ago in "Air Force One," there's a juicier movie there. Embeth Davidtz also lends some interest as the icy Dr. Judith Bolton, Wyatt's assistant, even when her character seems to come and go.

"Paranoia" is the kind of dim non-thriller that strains for tension where there is none. Can Adam download important computer files onto a flash drive in time while that computer's owner is taking a shower? Can he trust anyone in this shady business world? Are audiences supposed to play dumb? Even while you're in it, the film is rarely tense and not even entertaining in a "it's-just-a-movie" way. Once you're through with it, it has pretty much faded from your mind and ceases to exist. The "other" Hemsworth does get in some obligatory adonis shirtlessness, so count your blessings.