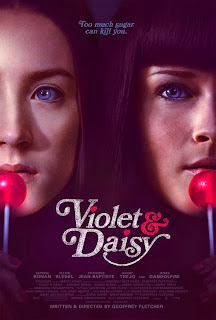 The directorial debut of screenwriter Geoffrey Fletcher (who won an Oscar for "Precious: Based on the Novel 'Push' by Sapphire"), "Violet & Daisy" is cheeky but slight, a satirical girls-with-guns comedy that makes for quite the peculiar mix and is hard to dislike all the same. It's like a blackly comedic cartoon that's interestingly never as over-the-top or whacked-out as its premise would suggest, nor is it the inspired gem it could have been. Of course, the joke of juxtaposition is that Violet and Daisy are teenage, 100-pound female assassins, sweetly played by the piercingly blue-eyed Alexis Bledel and Saoirse Ronan, the former getting to play a bit more against-type than the "Hanna" star. Where the film falters somewhat is in its bubblegum-chewing title contract killers, who are more like vessels for preciously colorful dialogue than fully drawn people.

On her 18th birthday, Daisy (Ronan) and her more-experienced partner/friend/roommate Violet (Bledel) find an easy gig for more money to buy desirable dresses from the couture line of pop-music idol Barbie Sunday. Their latest job doesn't exactly go as planned: when they arrive early to his apartment and both fall asleep on the couch, a businessman (James Gandolfini) doesn't leave or take their guns but covers them with a blanket and bakes them oatmeal cookies. Once they wake up from their nap, the girls keep having hesitations about doing him in, especially Daisy when she has second thoughts and gets to know Michael while Violet runs to the hardware store for more bullets. And yet, they'll have to finish the job or face the consequences.

Cleanly shot with a small scope as if it were a play (most of the action is set in that single apartment), "Violet & Daisy" starts out more as playfully entertaining style than substance. There are undeniable echoes of Quentin Tarantino's stylized dialogue and camera work. As it starts, the film wants to be ironic, both cute and violently riddled with bullets and blood. Its characters play pat-a-cake, hopscotch, and sling a yo-yo. While some of the jailbait-killer cleverness is inscrutable, there are amusing touches, like how in the opening chapter ("1. Cold pizza and a warm puppy"), we meet Violet and Daisy in nun habits, sharing jokes and carrying boxes from "Righteous Pizza," before they deliver an array of bullets. Then at one point, one of the girls slips on an unseen banana peel. Bledel and Ronan solidly shift between wide-eyed girly girls and professional killers with enough of a grey area to be considered misguided in life and not purely bad as people. Trouble is, Gandolfini, as their assigned hit whom the girls just call Mister, is the real heart and soul, infusing the most human feeling, sincerity, and warmth. We actually learn more about this flawed but tender-hearted man, who's prepared to go from the regrets in his life, and we don't really want to see him eat a bullet. Aside from the trio, Danny Trejo and Marianne Jean-Baptise also make fleeting but strong impressions, as Violet and Daisy's boss and the #1 sniper, respectively.

Never fully taking a fork in the road, writer-director Fletcher chooses not to go too dark or too bouncy, and the oddball tone sort of works in spite of his two badass characters hardly getting the chance to pop. In the film's only shocking bit, the two hit-girls giggle as they bounce on a group of dead hits, like how they'd jump on a bed at a slumber party, pumping the blood out of the men's mouths as The Three Degrees' 1970s soul hit "When Will I See You Again" briefly chirps on the soundtrack. Like that grimly giggly moment, it's not entirely easy what to make of "Violet & Daisy," except that it's a curiosity that isn't too off-putting or even that subversive. One thing is for sure, though: it ends more with an underlying sadness for its target and less closure with its killers.