Good Pitch: "In a World..." showcases Lake Bell's wit and flood of ideas 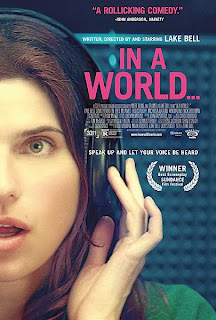 Lake Bell isn't really a new face to the big screen. You might remember her from the 2008 Paul Rudd-Eva Longoria ghost comedy "Over Her Dead Body," not because it was memorable or funny, which it wasn't, but because Bell was the sole bright spot. Thereafter, she enlivened otherwise stock supporting roles in romantic comedies (2008's "What Happens in Vegas," 2009's "It's Complicated," and 2011's "No Strings Attached") with her live-wire flair for comedy. Then earlier this year, she showcased some dramatic depth in the lo-fi thriller "Black Rock." Now—drum roll, please—her auspicious writing-directing debut "In a World…" showcases a bracing, smartly funny voice that finally gets to be heard.

Triple-threat Bell is such a quick-witted but unassuming and relatable presence as Carol Solomon, a dialect coach who's used to living in the shadow of father Sam Soto (Fred Melamed), a self-important narcissist who's also the voice-over king. Getting booted out of the house so Sam can live with his younger girlfriend Jamie (Alexandra Holden), she goes to crash with her concierge sister Dani (Michaela Watkins) and brother-in-law Moe (Rob Corddry). Then, as times in the v.o. business are changing and it used to be unheard-of to hear a woman's voice narrate "in a world…," she gets a gig for a new movie trailer of a feminist "Hunger Games"-like quadrilogy, which turns into a competition between her dad and his pompous up-and-coming protege, Gustav Warner (Ken Marino). On the side, Carol gets romantic with Gustav, even though dorky sound engineer Louis (Demitri Martin) holds a torch for her, while Dani and Moe start having marital problems.

A disarming mix of romantic comedy, family drama, and a movie-biz insider's look at the microcosm of voice-over professionalism and workplace sexism that affectionately opens with a homage to Don LaFontaine, the late real-life King of the Voice-over, "In a World…" has more than enough going for it, even when Bell's witty, offbeat script sometimes pads itself with ideas. This being a first feature, it may try to be too many things at once, but writer-director Bell keeps everything buoyant and has the good sense to give everyone in her terrific cast enough business to work with. Ordinarily seen as comedy performers, Watkins and Corddry are still funny but get to stretch their dramatic muscles a little. Martin makes for a charmingly awkward romantic foil for Bell. Also, Eva Longoria is a good sport, briefly playing herself who's struggling to do a Cockney accent for a movie, and Geena Davis (where has she been?) is more than welcome to see, turning up as an executive producer of "The Amazon Games." Above all else, Bell deserves to be a household name because she's always been one to watch.