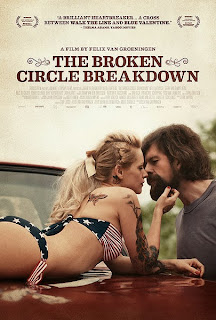 "The Broken Circle Breakdown," Belgium's entry for the Academy Awards' Best Foreign Language Film, has been a hit on the festival circuit, already winning accolades for Best Screenplay and Best Actress in a Narative Feature Film at the 2013 Tribeca Film Festival. Audiences should know this film is a bit of a downer, not unlike "Blue Valentine" albeit with a sublime bluegrass soundtrack, but more to the point, this is a beautifully crafted, authentically moving, and raw-to-the-bone piece of work. It crushes your heart in a memorable, intensely wrenching way.

Veerle Baetens and Johan Heldenbergh give vivid, impassioned performances as tattoo artist Elise and bluegrass band member Didier. When they first meet at Elise's ink parlor and then he invites her to a concert where she sees him leading the band, they immediately become intoxicated with one another and Elise joins the band. Making love leads them to the birth of their daughter, Maybelle (an adorable, poignant Nell Cattrysse), who, at six years of age, starts showing signs of fatigue and blood in her mouth before becoming diagnosed with cancer. Will the circle of life be unbroken?

Full of passion, heartache, and misery, "The Broken Circle Breakdown" is a heavy, bittersweet, and demanding drama. Director Felix Van Groeningen, working from a screenplay he adapted from actor Heldenbergh's play with Carl Joos, gracefully use their art of free-flowing, non-linear storytelling to leaven the tone and emotional heft of being in love, having a child, losing a child, and then watching that love die. Sharply cut by editor Nico Leunen, scenes are shuffled, going back in time (7 years earlier) and then forward in time (present-day 2006). It almost plays out like a dream, but nothing is a dream; it's just the highs and lows of life. What's more, the bluegrass music ("Country at its most pure," Didier says) reverberates the emotions. Elise and Didier are are so specific, as are the rural, wintry Belgian locations, but what the couple goes through is universal. Covering the bases of love, sex, family, faith, music, pain, sorrow, and even country-of-dreamers America, this is homespun, lived-in storytelling, carving out its own identity and packing an emotionally rich wallop.