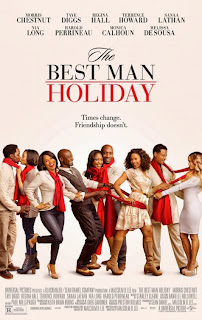 Was anyone losing sleep over wondering what the characters from 1999's "The Best Man" were up to all this time? Even if one struggles to picture that agreeably glossy and spirited dramedy—which refreshingly put a sparkling African-American ensemble together, found some truth in committed relationships and male friendship amidst the delayed misunderstandings and histrionics, and pleased its often underserved audience—ever existing, they're not bad revisiting and hanging out with in the belated sequel, "The Best Man Holiday." Fourteen years is a long time in between a sleeper hit and its follow-up, but Spike Lee's cousin, returning writer-director Malcolm D. Lee (who redeems himself after "Scary Movie 5," an early contender for the worst movie of 2013), gets his original cast back, each one of them sliding back into their roles comfortably. Like a smarter, funnier, and more emotionally genuine Tyler Perry movie, the film itself is a pleasant reunion.

Lost time is made up for in a briskly paced montage of footage from 1999, so a flow chart shouldn't be necessary. In the first "Best Man," writer Harper Stewart (Taye Diggs) made it big with his thinly veiled, semi-autobiographical book but not with his college pal, NFL superstar Lance (Morris Chestnut), who, before jumping the broom, realized his best man had a one-night stand with not a ficticious character but his bride-to-be. Fifteen years later, Harper is suffering from a dry patch, not able to publish another best-seller, and his optimistic chef wife, Robin (Sanaa Lathan), is pregnant with their first child. Harper no longer holds unfinished business with platonic friend Jordan (Nia Long), who's still career-minded and now a top MSNBC producer with a white boyfriend (Eddie Cibrian). Rounding out the rest of the gang is Julian (Harold Perrineau) and his wife, ex-stripper Candace (Regina Hall), who now run a charter school together and have two daughters; Julian's naggy ex Shelby (Melissa De Sousa) thinks she's a hot tamale, now being part of "Real Housewives of Westchester"; and there's Quentin (Terrence Howard), a devil-may-care job-hopper who ended up shacking up with Shelby and is still chasing skirts. The whole gang accepts their invitations for a Christmas weekend spent with Lance, retiring from the N.Y. Giants as a running back, and his lamb of a wife, Mia (Monica Calhoun), in their McMansion, complete with an itinerary. However, Lance and Harper have never been as close as they once were since the latter's dirty laundry came tumbling out the day of the former's bachelor party. This time, the holidays will bring everyone closer.

Formulaic in the extreme, "The Best Man Holiday" doesn't have so much of a plot as it does a string of subplots, or mini-dramas, about marriage, friendship, careers, babies, and the Big C. Some of them are identifiable conflicts and others are just screenplay misunderstandings. The financially strapped Harper is faced with a conundrum, losing out on a big advance in his writing career or exploiting Lance to write his memoir. Julian struggles with keeping he and his's wife school open once a high-up donor finds a promiscuous viral video of Candace from her "Candy" days, unbeknownst to her. There's also tension and open wounds between friends, wives, and exes, and Quentin smokes a lot of pot. Lance also wears his Christian faith on his sleeve (his mantra is "God, Family, Football" and in that order), and while it was touched upon in the first film, it has a bigger role here without being too jarringly preachy. The trajectory of the narrative comes with The Big Game, The Funeral, and Child Birth (in an SUV), the latter overextending its welcome in the forced fashion it plays out. Fortunately, writer-director Lee is capable of selling teary-eyed sentiment because it comes from a more honest place, along with understated work by his actors. Coming from the man responsible for 2008's rotten "Welcome Home Roscoe Jenkins" (which utterly failed at spiking ooey-gooey sentimentality with broad, crude slapstick), the pathos might have come off sappy and, while transparently manipulative, it's also unsuspectingly touching.

Looking beyond the occasionally graceless tonal shifts, swerving from comedic shtick to soapy, weepy melodrama and back, "The Best Man Holiday" levels out the breezy, naughty fun and wish-fulfillment factor with some gravity. It finally hits a sweet spot as a frothy piece of entertainment with an appealing, ridiculously attractive cast bringing charisma and dramatic chops. As often is the case with ensemble pieces, it's hard to believe the actors are supposed to be lifelong friends, but this one thrives in that department. As Harper and Lance, Taye Diggs and Morris Chestnut believably convey their camaraderie that will be mended by film's end, and as well as with Harold Perrineau and Terrence Howard, they all have a relaxed chemistry. Instead of a wedding-reception Electric Slide, there's a charming dance-and-lip-sync interlude to New Edition's "Can You Stand the Rain" by the four men. As the hormonal Robin, Sanaa Lathan shines once again as the voice of reason in most situations; the fragile-looking Monica Calhoun has a lovely grace and spiritual strength about her that makes Mia enormously sympathetic; and the radiant Long has a wonderful handle on her driven Jordan who learns to be more open to love and has a heartbreakingly authentic scene in a bathtub. Also, the humor is punched up here but still character-based. So, on that front, Howard gets to have the most fun as the token live-wire, constantly goofing on his co-stars and, in one instance in a high state, taking a picture of his penis with his smart phone, while the delightful Regina Hall (who was a newcomer at the time of the first film) comes away with the sharpest repartee on the female side. Finally, one might wonder what the shrewish Shelby character is even doing here, though it's no fault of Melissa De Sousa, who luckily gets to breathe some newfound emotion into her.

It doesn't affect the overall feel, but, for a Christmas movie with contemporary and classic Yuletide carols on the soundtrack, the film loses brownie points in there being barely an inch of snow on the ground. Whenever an establishing shot outside of Lance and Mia's mansion shows maybe four small spots of snow on the ground and green grass, it's a minor distraction. Everybody bundles up outside, too, but not a breath of hot air leaves any of their mouths. "The Best Man Holiday" (yes, an apostrophe 'S' seems to be missing there) might not even have the rewatchability of, say, 2007's pleasingly festive crowd-pleaser "This Christmas," but what you get is an enjoyable, warmly inviting surprise. It wouldn't even be disagreeable to catch back up with these folks for "The Best Man Marigold Hotel."