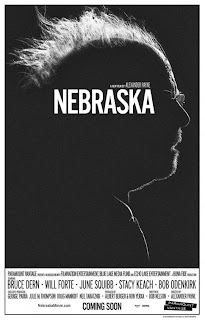 The feature writing debut of Bob Nelson, "Nebraska" is the latest dramedy from director Alexander Payne (2011's "The Descendants") that doubles as a soul-searching road movie and a slice of Americana. It's humane but lacerating, it's sad but dryly amusing, and it's bittersweet but gentle. Timelessly photographed with a pure independent-cinema quality in lovely black and white by Phedon Papamichael, the film is most certainly grey in feeling. But without ever becoming depressing, there's an undercurrent of melancholy with hope and idiosyncratic humor.

Addled by alcohol and old age, stubborn, befuddled Korean War vet Woody Grant (Bruce Dern) is teetering on the edge of dementia. He lives in Billings, Montana, with his no-nonsense wife Kate (June Squibb), who considers her husband a burden after fifty years of marriage, and they have two adult sons, local TV anchor Ross (Bob Odenkirk) and electronics salesman David (Will Forte). One day, Woody receives a Publishers Clearing House-like letter informing him that he's won a million dollars, so he just starts walking down the highway, headed for the sweepstakes office in Lincoln, Nebraska, before a cop picks him up. When younger son David is recently broken up with his girlfriend, he decides to take a few days off and give his poor old dad something to live for, against the complaints of Ross and Kate, who's had it and would rather just put him in a nursing home. Woody doesn't drive anymore, but he wants to buy a truck with his winnings, and David knows the letter is just a gimmicky scam, but he gets to spend some time with his father. Once they're waylaid in his father's downtrodden, close-knit hometown of Hawthorne to stay with Woody's brother's family, David learns more and more about his father that he never knew growing up.

Early on, "Nebraska" feels a trifle aloof, like one of Wes Anderson's oddball dioramas in its distant framing of characters uttering the darndest things, but then the deliberate, character-driven momentum picks up. There is a fine line between mocking characters and having affection for them and their quirks, and Alexander Payne walks that line with his ornery Middle Americans who aren't all stereotypically decent, dim, aw-shucks types. They're all part of his observational humor without being overly cruel or pointing fingers at them too much. The Cornhusker State, in all of its ennui, is a character itself, a wide-open region that looks as isolated and lonely as Woody, and further brought to life by the rhythms of composer Mark Orton's memorably folksy score. In Hawthorne, some of the characters who congratulate Woody for hitting it rich as a "millionaire" call to mind the Coen brothers and their attention to the heartland's local color, like Woody's former chum and mechanic partner Ed Pegram (Stacy Keach) who may or may not have stolen Woody's air compressor. But instead of demeaning or condescending these small-town folks, Payne and writer Bob Nelson embrace their flaws and quirks, and capture their truthfully mundane lives, as when Woody and David just sit in front of the TV like zombies with Woody's brother, his wife, and their two grown sons Bart (newcomer Tim Driscoll) and Cole (Devin Ratray, "Home Alone"). The only real conversation they have involves their cars and how long it took David to drive from Billings to Hawthorne, and Bart and Cole, a sort of Tweedledee and Tweedledum, get a few chuckles out of it.

At the ripe old age of 77, Bruce Dern is superb in a reactive, shuffling performance as Woody, a grizzled codger who still has a drinking problem and isn't all there, rarely answering questions he's asked on the first try. He's not even that warm of a father, admitting to David the reason he was born was because he "liked to screw, and your mother's a Catholic," but one still can't help but feel sorry for Woody, who is so stubborn in his belief that he's a millionaire. "SNL" member Will Forte reels in his comedic shtick with ease and gives a low-key, revelatory turn as Dave, playing more of a sensitive straight man. Bob Odenkirk, also known for comedy, adds some shadings to older brother Ross, who shares a more "realistic" viewpoint with his mom. 84-year-old character actress June Squibb, a name we should be hearing more often, is a pricelessly salty, hysterically funny spitfire in her scene-stealing role as Kate, a true shoot-from-the-hip kind of gal. She's crabby and catty and has something to say about every neighbor and family member, living or deceased. During a visit to the cemetery to pay her respects, Kate isn't shy about bad-mouthing Woody's late sister and even tells her son which of the county men wanted to get in her knickers back in the day. And yet, she's not just a pungent, harping caricature, standing up for her husband when members of his extended family want a piece of Woody's nonexistent jackpot and planting a kiss on his cheek at one point. Also worth mentioning: Angela McEwan is a gem in her one scene and one wordless look at the climax, bringing an extra poignancy as Peg Nagy, a widow who still runs the local newspaper and used to date Woody but lost him to Kate.

Moving patiently at its own ambling, laid-back speed of the Midwest (although Squibb is such an energy booster), the film is not forced by plot; even better, it's about flesh-and-blood people who feel like locals. Smaller and even more deadpan than what we're used to seeing from the filmmaker (he didn't write the script), "Nebraska" isn't quite up to Payne's best work—his five other films are collectively great—but all of the real and colorfully drawn characters make it a trip worth taking, ending with another of Payne's subtly touching, simply perfect final shots. It's the type of film that grows on you long after it's over and could be loved with repeated viewings.