If These Walls Could Talk: "Concussion" a smart, nonjudgmental drama about a lesbian housewife-cum-call girl 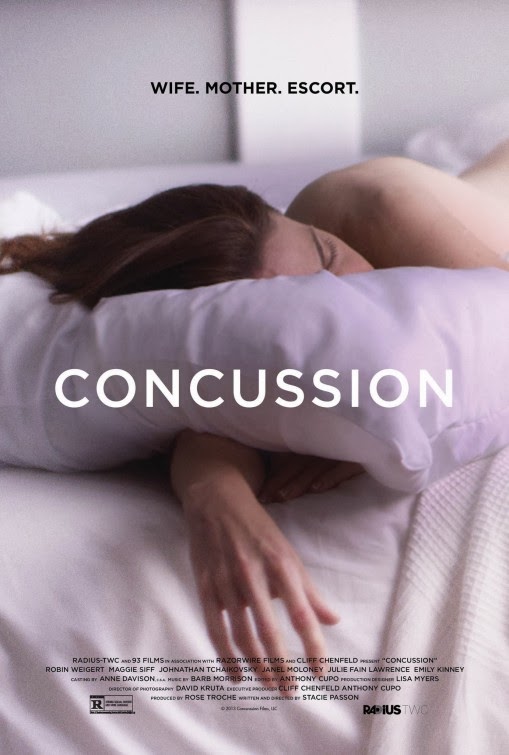 In the annals of gay-themed independent cinema, the "coming-out" story and the "boy-meets-boy" or "girl-meets-girl" romance have been told so many times that films of that ilk have grown as well-worn as Hollywood romantic comedies between a straight couple. The savvy indie drama "Concussion," from writer-director Stacie Passon making her debut, finds a refreshing equal-opportunity approach with "the double life," even if that has been done with heterosexuals countless times, too, especially on the Lifetime network. The film uses an actual concussion as a catalyst, eschewing the wackiness and perversity that might recall John Waters' "A Dirty Shame" (where Tracey Ullman's bonk to the head turned her into a raging sex addict), but really, the film in context is about suburban discontent and a very human appetite for intimacy, and it's told with an intelligence and sensitivity.

To David Bowie's "Oh! You Pretty Things," we open to a health club spin class full of women striving to keep their bodies toned as if their lives depended on it and chattering about things bored housewives tend to gossip about over lunch. The film focuses on one bored 42-year-old stay-at-home mom, Abby Ableman (Robin Weigert), who's on the PTA and the board at her synagogue. She can't breathe, being settled but unfulfilled in her New York suburbs life. She and her wife, businesslike divorce attorney Kate (Julie Fain Lawrence), haven't had sex in a while, and she always picks up their two children from school on time. Life couldn't be more routine, as she does all the laundry, vacuuming and dinner preparation. One day, Abby gets hit in the head by her son's baseball, and without any magical outside force, she decides to make a change. To balance out her life, she buys a loft in the city and flip it, renovating and designing the property with contractor Justin (Johnathan Tchaikovsky), who's dating a college student who just so happens to be runing a call-girl service for extra money. Then, on a whim, Abby uses the loft as a her base of operation to talk to and pleasure clients of all ages, shapes and sizes with different levels of experience. However, everything is done on her terms; Abby will only see other women and she insists on meeting them all for coffee first.

Presenting an upper-middle-class midlife crisis could lean towards "Concussion" being a First-World Problem Movie or the situation that Abby puts herself into would seem absurd, but "Concussion" is more nuanced, humorously incisive, and nonjudgmental than either preconceived notion. What's so interesting about writer-director Passon's take is that she justifies Abby's behavior without fully condoning polyamory or prostitution. The character doesn't prostitute herself because she's financially strapped or fetishistic; she feels static and one-sided in her marriage and wants to reconnect with her own sexuality. Though she has a hard, internal presence as a housewife, Robin Weigert (who could almost pass as a sister of Ann Dowd or Siobhan Fallon Hogan) gives a sensual, grounded lead performance and never stops being sympathetic as the dissatisfied Abby, as we see her mundane responsibilities of the daily grind and understand her yearning. In the early going, an unbroken shot holds on Abby as she jogs on her home treadmill, cranking up the speed more and more before she gets sick, and it speaks volumes about her stifled existence. Her new career gives her a freedom and could either help or destroy her own marriage. All of the scenes between Abby and her clients are realistically intimate and tasteful without existing merely to titillate the male gaze. Moments with an overweight women's studies student who has never been kissed or touched are poignant. With Sam (Maggie Siff, in a beautifully balanced portrayal), a cute housewife and mother in Abby's spin class who has a kid at Abby's son's school and ends up becoming a client, the story also takes a seemingly gimmick direction that doesn't traverse into the most expected ways.

Fluidly shot with a mix of warmth and sterility by cinematographer David Kruta, the film looks lovely, too. Filmmaker Passon seems to trust the IQ of her audience, as "Concussion" never bangs us over the head with heavy, obvious metaphors or arty indie pretensions, even when Abby angrily carves out a less-than-desirable tile in the loft kitchen. Abby's journey leads to a tidier conclusion than expected, but there is no definitive "what now?" answer to how she will end up, either. Abby might be better for her choices and experiences, and it all might have helped her marriage and life in the long run. Life will go on.