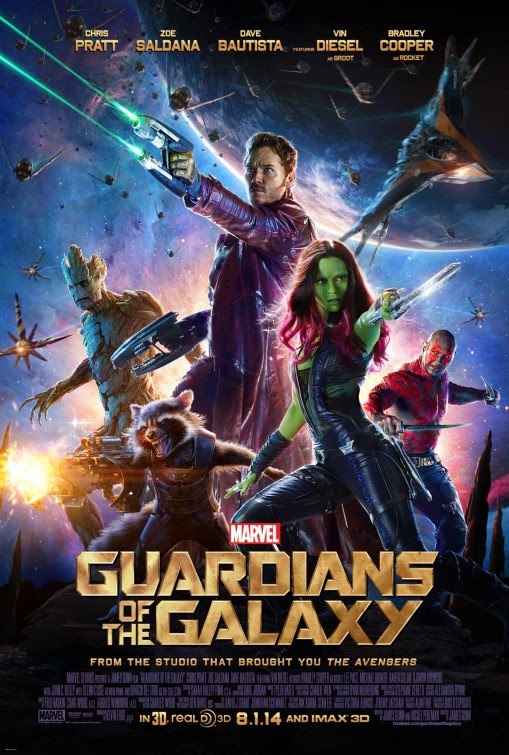 Arriving at the end of Superhero Summer Central, following "Captain America: The Winter Soldier," "The Amazing Spider-Man 2," and "X-Men: Days of Future Past," "Guardians of the Galaxy" might be one of the lesser-known Marvel entries with its brand of misfit universe-savers. Even more so than our buddies in "The Avengers," this motley crew of a different color is the jokey, playful flip side of most dark-and-serious superhero pictures that take themselves far too seriously, and frankly, it's a breath of fresh air. In adapting Dan Abnett and Andy Lanning's obscure 2008 comic-book property, writer-director James Gunn (the former Troma madman behind 2006's enjoyably gross horror-comedy "Slither" and, unfortunately, 2011's contemptibly smug black comedy/superhero deconstruction "Super") and freshman co-writer Nicole Perlman bring such a buoyant, jocular tone and a winking, idiosyncratic sense of humor to their on-screen quartet that enthusiasm and personality are two components the film does not lack. Where this sci-fi action-comedy runs into bumps, however, is during the busy action sequences, which aren't that special in the moment and become forgettable blurs in hindsight. On the whole, "Guardians of the Galaxy" still does more right than wrong, embracing its post-"Star Wars" space-opera trappings and an irresistibly funky catalogue of '70s-'80s pop tunes, while keeping its tongue firmly in cheek.

In 1988, human Peter Quill (Chris Pratt) was abducted from Earth by an extraterrestrial ship of interstellar pirates called Ravagers outside of the hospital where he watched his mother pass away from cancer. Twenty-six years later, he's on the abandoned planet of Morag as a rogue junker, calling himself "Star-Lord," and steals an all-powerful orb desired by Thanos (Josh Brolin) who sends out his henchman, Ronan (Lee Pace), to retrieve it and destroy the planet of Xandar. When Peter tries selling the doohickey, Thanos' green-skinned adopted daughter Gamora (Zoe Saldana) attacks him for it, while wisecracking raccoon Rocket (voice of Bradley Cooper) and his companion Groot (voice of Vin Diesel), a humanoid plant, try kidnapping Peter. They all get thrown into the high-security prison Knowhere, and there they meet Drax the Destroyer (Dave Bautista), a tattooed toughie bent on revenge against Ronan for the deaths of his wife and daughter. It's not only unlikely that the five break out and form a ragtag band, but will it be harder for them to get along or save the precious galaxy?

Where else are you going to find Chris Pratt using a space creature as a microphone and boogying on down to a '70s mixtape of Redbone's "Come and Get Your Love" on his Walkman? Even before the Marvel logo or any funny business, "Guardians of the Galaxy" works up dramatic weight as Peter refuses to hold his dying mother's hand, but predominantly, this is a comedy. With smartass one-liners, visual gags, and physical humor, the comedy is the overriding force here that whenever writer-director Gunn returns to the scenes with the serious, deep-voiced Thanos, it drags down the lighter pacing and fun. Finer details aside, the "everyone-wants-the-whatchamacallit-to-do-this-and-that" plot is pretty unspectacular, and when the film stalls to explain everything, one wishes it would just blast off and leave exposition in the dust. World-building is only adequately explored, as the film zippily throws out a lot of fictional places and names that it can be hard to digest all at once and so many different species of colorfully skinned, facially strange creatures seem to walk out of a Comic Con-attending geek's wet dream or "Star Wars'" Chalmun's Cantina bar. When the film is over, very little about the action set-pieces can be recalled. They lack scope and boil down to colorful CGI overload, aside from a balletically choreographed chase and knockabout over the desirable orb between the Guardians, as well as the group's prison break. Really, the film's strengths lie in the characters and their snappy interactions. Peter, Gamora, Rocket, Groot and Drax make up an enjoyable unit, like a dysfunctional family bound by their own personal tragedies.

Finding his way in small big-screen parts over the years and slowly but surely making it to headlining status, Chris Pratt is so gosh darn lovable (and buffer than usual) as Peter Quill. From the mixtapes (featuring Blue Swede's "Hooked on a Feeling" and The Runaways' "Cherry Bomb") being the only things left to him by his late mother, there's a vulnerability to Peter that looks good on Pratt, who brings humanity to his snarky attitude. Adding to her résumé of different colors, Zoe Saldana elevates her underwritten part of Gamora by proving with her athleticism that she can handle most physical situations. During one nice moment, Gamora even humorously rejects Quills' romantic advance by calling his slow-dance moves "pelvic sorcery." Without question, though, Bradley Cooper is the best of the well-chosen bunch and laudably garners the biggest and most giggles with just his wise-guy voice as sarcasm-spouting raccoon Rocket. Unless one has advance knowledge about Cooper's participation, it's hard to recognize the actor's voice. And any movie that makes one able to like and care about a monosyllabic tree and find the gruff Vin Diesel's vocal performance as Groot so warm and adorable is certainly trying. Both wonderfully realized as nearly photorealistic creations, Rocket and Groot are like this movie's own R2D2 and C3PO. Also, WWE champion Dave Bautista brings some unexpected depth to the hulking Drax and scores deadpan laughs when the brawny dummy doesn't understand a metaphor.

Everyone else who isn't a "guardian" fares less well. As lead heavy Ronan, Lee Pace is unrecognizably lost in his gnarly make-up, but his performance barely registers, while an equally unrecognizable Karen Gillan lends a watchable slinkiness as Gamora's angry half-sister Nebula. Both in extended cameos, Glenn Close always breathes credibility, no matter how silly her wardrobe, but lends little else to the table as Xandar's peace keeper Nova Prime, while John C. Reilly is improperly sidelined as Corspmen Dey. Weirdly resembling Will Ferrell's fashion guru Mugatu from "Zoolander," Benicio del Toro adds momentary flamboyance, but he's in and out too quickly as Taneleer Tivan/The Collector, a character whose participation in the film serves as a sidetrip that doesn't go anywhere of much consequence but probably plants the seed for what's to come.

As a $170-million, CG/practical-effects extravaganza, "Guardians of the Galaxy" has more than enough eye candy in its sky-high production values and time-consumingly detailed make-up, but not too much that no time and care were put into the script. There is real joy here. There are small but noticeably cute touches that feel both familiar and fresh, like the obligatory "team walking in a line toward the camera" shot in slo-mo but with Gamora yawning, or Groot flashing a smile when everyone least expects it. Groot's one recurring line of dialogue—"I am Groot!"—coupled with Rocket's translation of that three-word phrase, and a reference to "Footloose" even get their own inspired running jokes. Ultimately, "Guardians of the Galaxy" is a likably goofy, lively and cheeky lark, though really never the ecstatic, rollicking space adventure it could have been. It evaporates as fast as it comes, but while it's onscreen, it's a ton of fun. And, as we go forward into Phase Three of the Marvel universe, this is early proof that its marvel of characters will be just as much of a blast to hang out with when they return.