It's a Dreamer's World: "Tomorrowland" a fun, inventive ride of childlike wonder 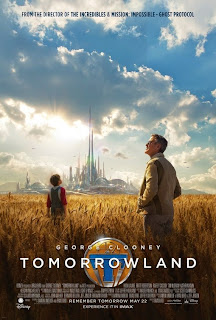 With so much secrecy surrounding Disney's "Tomorrowland"—a concept brought into fruition from Disney World's futuristic, utopian attraction in the Magic Kingdom—the finished product is a pleasant surprise that only disappoints in its resolution. For his sophomore foray into live-action filmmaking following 2011's tremendously thrilling "Mission: Impossible - Ghost Protocol," Pixar director Brad Bird (1999's "The Iron Giant," 2004's "The Incredible" and 2007's "Ratatouille"), working from a script he co-wrote with Damon Lindelof (2013's "World War Z"), distinguishes his film from most summer tentpoles with the gee-whiz imagination of a dreamer. A family entertainment that matches the tone and spirit of many live-action Disney offerings from decades' past, such as 1975's "Escape to Witch Mountain" and 1991's "The Rocketeer," "Tomorrowland" is a good-humored, inventively whimsical sci-fi adventure that's a lot of fun, particularly for the first two-thirds. Basically, it's "Atlas Shrugged" for kids.

Tired of being lectured about the doom and gloom of the future and believing in a better tomorrow, resolute teenager Casey Newton (Britt Robertson), daughter to a soon-to-be-laid-off NASA rocket scientist (Tim McGraw), spends her nights sneaking in to sabotage the Cape Canaveral launchpad. Then she comes into possession of a mysterious pin with a "T' on it. When she touches it, she lands in a wheat field with a futuristic city in the distance. The pin's magic only works for her, and once she gains entry to the futuristic city of Tomorrowland, the pin runs out of juice. In her search for another pin, Casey finds herself at the clutches of a robot force, but she's saved by the one who gave her the pin: the pint-sized Athena (Raffey Cassidy). From there, Athena sends Casey to see Frank Walker (George Clooney), a former dreamer-turned-cynic now living a reclusive life on a farm. At first, Frank wants nothing to do with the kid and Tomorrowland until he realizes that they both might be able to save the fate of the world.

When Tomorrowland's Governor David Nix (Hugh Laurie) at the Hall of Invention attraction tells a young Frank his jet pack that doesn't really fly looks fun but won't change the world, "Tomorrowland" could be summed up the same way. The film introduces Frank and Casey in an annoyingly cute framing device, where one keeps talking over the other. Fortunately, once Frank starts to tell his story as a young boy, the film flashes back to the 1954 New York World's Fair, where a young Frank (played by Thomas Robinson) lugs around his backpack with his jerry-built jet pack. These '50s sequences that begin on the opening day of the "It's a Small World" boat ride are an example of the film's sense of joy and wide-eyed, childlike wonder. Then, when Casey first comes across the mysterious pin with her other belongings as she leaves jail, the switch to a golden wheat field is a staggeringly cool effect. It gets even cooler from there once she tests out the pin's magic in a field near her house that eventually leads her into a lagoon. Transporting her body to Tomorrowland, we discover the futuristic land right along with Casey and drink in the spectacular sights on a monorail, like synchronized diving pools and space cadets flying every which way on their jet packs. Tomorrowland itself is a sight to behold, and we've rarely seen anything like it, but once Casey and Frank actually get there, it feels like too little is at stake and the script shifts into telling over showing with a lot philosophizing about what Tomorrowland stands for.

Director Brad Bird and screenwriter Damon Lindelof (he of "Lost" and "Prometheus" fame) pose more questions than answers, which is fine, but here, there is so much exposition and yet not enough world-building through images, save for the one introductory scene with Casey. If the totality of "Tomorrowland" is less than the sum of its parts as a so-called "mystery box," that doesn't take away from the imagination and excitement felt on a scene-to-scene basis. Before one realizes there are no surprising mysteries to really unlock, the film engages, keeping the details of its plot close to the vest for a while. Aided by some impressive CG work and Michael Giacchino's rousing Spielbergian music score, director Bird also executes several genuinely exciting, crazily choreographed set-pieces. The central show-stopper has Frank's booby-trapped tech house being invaded by strange men in suits, à la "The Matrix's" Agent Smith, before he and Casey take off to Tomorrowland in his bathtub (!). Also, in one of the film's giddily loopy highlights, Keegan-Michael Key and a crazy-haired Kathryn Hahn crop up as an eccentric pair of shopkeepers in a Houston sci-fi memorabilia store called "Blast from the Past," with visual cameos by a one-sheet of Brad Bird's very own "The Iron Giant" and merchandise from "Star Wars" and "The Day the Earth Stood Still."

George Clooney might be the biggest marquee name, and his charm still shines through as the disgruntled Frank Walter, but Britt Robertson is the star and she will go far after this. As Casey, she's a likable, plucky protagonist to follow, and her back-and-forth banter with Clooney's Walter is breezy and amusing, representing young optimism and old cynicism. Likewise, Raffey Cassidy is a complete natural and delight, playing wise beyond her years, that she could have a career if she wants one. Though it doesn't make or break the film, Judy Greer briefly appears in a video with Casey as a young child, but her disappearance is oddly never mentioned. Is Tim McGraw's Eddie Newton divorced or a widower? Fortunately, there is a give-and-take between the emotional undercurrents of the characters and the spectacle. One also awaits for the relationship between the now-old Frank and still-young Athena to become creepy, but it luckily doesn't really go there. "Tomorrowland" actually has a soul, and for the first two chunks of the film, it has the makings of becoming a Disney classic, until that third act comes in. The film begins laying on its well-meaning soapbox ideals—the present world lives in fear of doomsday disasters and a state of hopelessness—a bit thick but not enough to deter from all of the good will the film has already set up.  Even if the destination isn't entirely satisfying, "Tomorrowland" is all about the journey. It's enough to bring out the little kid in you.