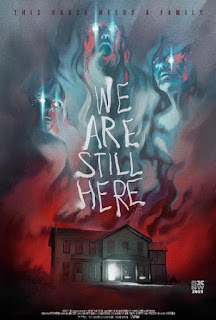 With the exciting renaissance of modern horror films (i.e. 2014's "The Babadook," "Starry Eyes," "Housebound," and 2015's "It Follows"), the best kind being independently produced and not by a studio giant, one wonders when the next one will come. True-blue horror fans can stop waiting because "We Are Still Here" is a macabre little gem, if not quite perfect. Debuting writer-director Ted Geoghegan displays a reverence for 1970s horror and a definite soft spot for Lucio Fulci, enough to become a new name to be remembered alongside the current indie horror champions, like Adam Wingard ("You're Next" and "The Guest") and Ti West ("The House of the Devil," "The Innkeepers" and "The Sacrament"). Like an old, musty, familiar house that gets a nice dusting and lets some light in, "We Are Still Here" is fortunately more than just a pastiche but an unpredictably crafted piece of down-home horror that's actually set in the '70s (based on a concept by Richard Griffin).

Reeling from the death of their son Bobby in a car accident, middle-aged Paul (Andrew Sensenig) and Annie Sacchetti (Barbara Crampton) move out of the city and into a creaky old house in the sleepy, wintry New England town of Aylesbury. The pain is still fresh for Annie, who starts to feel the presence of Bobby in their new home, but Paul is more skeptical. When neighbor Dave McCabe (Monte Markham) and quiet wife Cat (Connie Neer) come knocking at the Sacchettis' door one evening, Paul and Anne get an earful about "the darkness" in their present home, a turn-of-the-century funeral parlor run by the disturbed, grave-robbing Dagmar family that now demands sacrifices. Once their new-agey friends, clairvoyant May (Lisa Marie) and stoned-out Jacob Lewis (Larry Fessenden), arrive to keep them company, Annie starts to realize the energy in the house is not her son and something just isn't right in the town.

Conceived by contempo schlock-meister Richard Griffin and scripted by director Ted Geoghegan, "We Are Still Here" is not merely a boo machine. With more atmosphere than you can shake a stick at—and much of the horror exists during the daytime—the film deliberately gathers tension out of the bloody past in a hundred-year-old house and melancholy from parental grief over a child's death. While most horror films today are about a younger set, "We Are Still Here" centers on mature protagonists, filled by acting veterans Andrew Sensenig and Barbara Crampton. Sensenig wisely underplays the unconvinced Paul, while Crampton (the scream queen known for 1985's "Re-Animator," 1986's "From Beyond" and "Chopping Mall," and 2011's "You're Next") is a bit uneven, her motherly grief ringing raw and true but some of her line readings coming off quite stiff. Monte Markham raises his voice without overacting to unbelievable degrees as town elder Dave McCabe, and for some welcome humor, Lisa Marie and low-budget horror filmmaker/actor Larry Fessenden lend loopy support as Annie's hippie friends. The latter also gets to sell a possession scene with a gnarly end.

Director Ted Geoghegan and cinematographer Karim Hussain's (2012's "Antiviral") offer potent scares in the sense of foreboding, the use of silence, and an evocative, telling mise-en-scène. They never waste one inch of the frame, forcing the viewer to check every corner for one of the ghouls. The infernal nightmares that haunt the house are done in the way of "The Fog"—John Carpenter's 1980 original, not the laughably tacky remake—lurking in the darkness and then making their presence really count each time they come around the living. For a slow-burn, the film still remains skittishly tense and ends with a bang. A creepy set-piece involves May and Jacob's son Harry (Michael Patrick), Bobby's old college roomie, and his girlfriend (Kelsea Dakota), hanging out at the house and checking out the hot cellar—but not for long—while their folks have dinner in town. There is also a solid seat-jumping, gasp-inducing moment where Paul wakes up to the shadows of two feet on the other side of his bedroom door. Finally, the third act culminates in a weapon-wielding siege and an eruptive, dementedly gore-drenched Grand Guignol of messy, all-hell-breaking-loose splatter before ending on a note of touchingly cathartic ambiguity. "We Are Still Here" is one that demands attention.