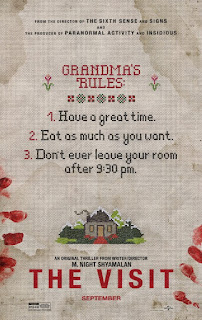 A once-promising auteur during the aughts, M. Night Shyamalan seemed to squander his clout right around 2004's "The Village," followed by a downward spiral of two disappointing misfires (2006's "Lady in the Water" and 2008's "The Happening") and two impersonal, big-budget for-hire projects (2010's "The Last Airbender" and 2013's "After Earth") that could have been made by anyone, so it was time for a turnaround. Now, a lot is riding on "The Visit," a low-budget horror comedy given the approval by Jason Blum's Blumhouse Productions. There would be nothing more pleasing to report than that the film is a return to form for Shyamalan. While it's not up to scale with "The Sixth Sense," "Unbreakable," or "Signs," "The Visit" is like a twistedly fun bedtime story made with a filmmaker's childlike glee that will certainly ruin the comfort of going to grandma and grandpa's house.

15-year-old aspiring filmmaker Becca (Olivia DeJonge) and 13-year-old wannabe rapper Tyler (Ed Oxenbould) have never met their grandparents, whom have been estranged with their Philadelphia single mother Loretta (Kathryn Hahn) for reasons Becca intends to discover in the documentary she's shooting. When Mom puts her children on the train, while she herself goes off on a cruise with her boyfriend, Nana (Deanna Dunagan) and Pop Pop (Peter McRobbie) meet Becca and Tyler with open arms and take them to their Pennsylvania farmhouse in the snow-covered country for a week-long visit. The kids enjoy spending time with Nana baking cookies when Becca isn't using Tyler as her co-director, but it's not until night falls when Pop Pop gives them a bedtime of 9:30 that something strange seems afoot. Becca wakes up and spots Nana throwing up downstairs. The next day, Tyler suspects Pop Pop hiding something in the shed out back. Both of their grandparents' behavior just gets stranger from there. Via Skype, their mom just reassures them that her parents are just old and probably getting a little senile, but something about Nana and Pop just isn't quite right.

Lest one think the "found-footage" format is so five years ago or that M. Night Shyamalan is a little late to the party, "The Visit" actually savvily builds the mock-documentary conceit into the story and uses it in a more practical sense. As a deliberate choice, there is no music score, unless it reflects Becca's actual documentary, so there's nothing to signal a jump scare, making said jump scares more effective. (Only does the denouement uses an intentionally sappy song because it's Mom's favorite.) As soon as Becca and Tyler go under the house to play hide and seek, just like their mother did when she was a kid, and discover a third party under there with them, the film sets a kooky, off-kilter tone that constantly plays with the audience's expectations. Shyamalan has his actors play it straight but breaks away from the earnestness and self-seriousness that plagued both "Lady in the Water" and "The Happening." Instead of accidentally earning unintended howlers, "The Visit" is actually knowingly and liberatingly funny. Seemingly, Shyamalan has finally learned how to execute his self-aware sense of humor without coming across campy, inviting the viewer to laugh along with him, and loses his mind a little in the process—and for the better. He finds a playfulness in the odd, often crazed behavior of Nana and Pop Pop and how Becca and Tyler react to it all. This isn't to say that the film doesn't dispense a couple of menacingly creepy moments, like Nana cackling in her rocking chair while staring at the wall or how she tells Becca to get all the way in to clean the inside of the oven, à la "Hansel and Gretel," in a running bit that has an unexpected payoff. There's also an amusingly nervous game of Yahtzee and a deeply icky shocker involving elderly incontinence that produces raised eyebrows and squirm-inducing giggles.

Carrying out Shyamalan's tradition of directing child actors, like Haley Joel Osment, Abigail Breslin and Rory Culkin, he coaxes likable performances out of Aussie newcomers Olivia DeJonge and Ed Oxenbould (2014's "Alexander and the Terrible, Horrible, No Good, Very Bad Day") as precocious filmmaking expert Becca and germaphobic rapper Tyler. DeJonge has a poised, natural presence who's able to make her ten-dollar filmmaking words, like "mise en scène" and "denouement," more organic than scripted, but Oxenbould is the real standout, being charismatic and slinging laughs left and right whenever he replaces a swear word with a female pop singer's name or the one time he imitates Nana's nighttime running in and out of the frame. As Nana and Pop Pop, stage actress Deanna Dunagan and screen veteran Peter McRobbie play their roles to the hilt. They're both a hoot, Dunagan positively ooky whenever making the switch from warm and loving to catatonic and possibly sinister and McRobbie unnervingly and blackly comic when he becomes paranoid or starts getting dressed for a costume party that already happened years ago. Finally, with just a few bookending scenes and Skype sessions, Kathryn Hahn finds emotional layers as a single mother with a troubled past that left her on poor terms with her parents.

After "The Sixth Sense," audiences were predisposed to expect a "Big Twist" with each next film M. Night Shyamalan would churn out. With "The Visit," Shyamalan doesn't get caught up in plot gimmicks, with the mock-doc style being gimmicky enough as when one of the siblings ill-advisedly investigates the basement, but mines the question of "What's wrong with Nana and Pop Pop?" for suspense. The answer might be anticipated by good guessers, but it's not obviously telegraphed or so out of left field. While it might have succeeded as a straight-ahead horror film not far off from "The Taking of Deborah Logan," "The Visit" operates more as a humorously demented and nightmarish yarn that taps into a child's perception of their eccentric grandparents with the sinister aura of one of those "Scary Stories to Tell in the Dark." Apart from an overly sentimental epilogue that at least has the decency to wrap up Becca's documentary and give her mother closure, Shyamalan still seems in command of his tricky tone. If it's not going to be his undeniable penance, it is certainly a good start in the right direction but will be misunderstood and divide audiences. This goes to prove that when Shyamalan gets counted out, he comes roaring back with something wonderfully weird.