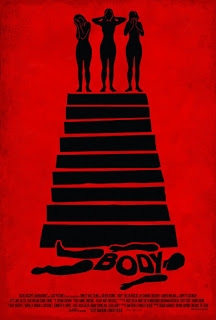 Disposing of a body can open up a real bad can of worms. "Body" isn't the first word in that sort of situational thriller — 1948's Alfred Hitchcock-directed "Rope" and 1955's "The Trouble with Harry," 1985's Milton Bradley game adaptation "Clue," 1991's "Don't Tell Mom the Babysitter's Dead," 1998's star-studded "Very Bad Things," 2015's underseen "Let's Kill Ward's Wife" and many more have all used this kind of concept with absurd or dark comedy in mind. Writer-directors Dan Berk and Robert Olsen's feature debut, on the other hand, is a minimalist thriller that has a terrific hook and milks it for all it is worth. Running a trimmer-than-trim 75 minutes, the film never has time to feel slack or protracted and it has so many mean bones in its body. "Body" goes straight down like a genre lover's tonic with extra bitters.

Staying in for a girls' night, college-aged best friends Holly (Helen Rogers), Mel (Lauren Molina), and Cali (Alexandra Turshen) spend their Christmas Eve playing Scrabble, smoking some pot, and then eating leftovers. A bored Cali eventually rounds up her girlfriends in her car and takes them to her loaded uncle's mansion to play games and drink a little. After being in awe of the house, Holly starts looking around the house to look for the bathroom and stumbles upon family photos on the walls. This isn't Cali's uncle's house. When the girls get ready to call it a night, a stranger (Larry Fessenden) comes into the house, but as the female trespassers try rushing past him, Holly accidentally knocks the man down the stairs. There's no going back on their actions and the night snowballs from there.

Written and directed by Dan Berk & Robert Olsen, "Body" effectively uses simplicity as a secret weapon and creates a palpable sense of panic. Instead of throwing out the moral quandary for a slasher pic, a la "I Know What You Did Last Summer," this is a skillfully crafted, wickedly provocative indie morality thriller that hinges on the common movie question, "What would you do?" The film fortunately takes a little time to get to know the girls, who have more dimension than just mere types, and the scenes of them just hanging out together ring quite true. Without this wind-up, it would be impossible to care about the outcome or believe their behavior. To read the rest of the review, go to Diabolique Magazine.