Corsets and Corpses: "Pride and Prejudice and Zombies" a bit neutered but cheeky and fun 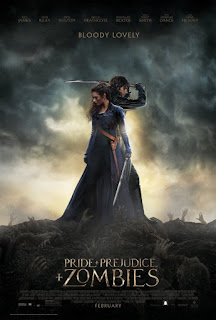 Jane Austen’s classical 1813 romantic comedy of manners gets irreverently mashed up with zombies in “Pride and Prejudice and Zombies,” an adaptation of Seth Grahame-Smith’s 2009 revisionist book (which still credited Austen as a co-author). At first blush, such an absurd cross-over idea would seem like a tacky gimmick (like Grahame-Smith's own "Abraham Lincoln: Vampire Hunter" in its 2012 movie form) or just a mere idea threaded into Austen's original structure. Writer-director Burr Steers, who made his debut fourteen years ago with the smart, edgy "Igby Goes Down" before turning to Zac Efron starrers "17 Again" and "Charlie St. Cloud," would seem like the wrong choice to finesse the right tone, too, but the combined result of so many disparate sensibilities tastes better than not. There is probably an R-rated director's cut out there, but against all odds, this corset period romance with the brain-eating walking dead is a cheeky, waywardly fun genre work and more or less delivers what the title suggests.

If you know “Pride and Prejudice,” just add zombies. In 19th-century England, the Black Plague has left the land overrun with the undead. Mr. Bennet (Charles Dance) has raised his five daughters as warriors, training them in martial arts and weaponry for battle and not in the kitchen, while Mrs. Bennet (Sally Phillips) is eager to marry her girls off to wealthy suitors as soon as possible. The four girls—Jane (Bella Heathcote), Kitty (Suki Waterhouse), Mary (Millie Brady) and Lydia (Ellie Bamber)—are more than willing, but their second eldest sister, Elizabeth (Lily James), has little interest in finding a husband. When the eligible Mr. Bingley (Douglas Booth) throws a ball to begin courting Jane, all five Bennet sisters attend and end up doing battle when an army of zombies crash the party. Thereafter, Bingley’s friend Mr. Fitzwilliam Darcy (Sam Riley), a zombie hunter himself, understands Elizabeth can take care of herself, but her own pride and prejudice against him might turn around.

“Pride and Prejudice and Zombies” does cleverly meld corpsy monsters into the Regency Era England of Jane Austen’s refined novel, establishing this fan-fiction world with a heightened logic that works. The tone maintains a droll lightness, even when zombies are being hacked to pieces, and the story beats of Austen’s story still remain (perhaps to a fault). It’s still admirable to see Elizabeth Bennet stick to her guns, even as she remains ladylike when tightening her corset and securing her daggers to her garter. “I shall never relinquish my sword for a ring,” Lizzie tells her sisters at Mr. Bingley’s ball. When one of them says that she would for the right man, Lizzie retorts, “The right man wouldn’t ask me to.” Touché. What doesn’t click as well, then, is the use of the zombies. After a narrative direction involving a zombie church, the zombie angle becomes something of an afterthought once they’re asked to no longer be threatening. And, aside from a pre-credit scene that introduces Darcy as a zombie-killing master—he releases a vile of flies to detect rotting flesh in a card room on a wealthy estate and then does the honors with a broken wine glass—the film is more delightfully gross and badass-cool than scary. There is at least the snot bubble that emerges from the one nostril of a young woman’s half-dead face, and there’s one fearfully creepy shot of a zombified woman and her zombified baby standing in the rain. Otherwise, the zombies are so quickly dispensed with as soon as they appear, someone showing up in time to blast off their head.

After making a perfectly pure Ella in last year’s live-action “Cinderella,” Lily James’ Lizzie Bennet, another fiercely independent heroine, is like a natural extension. She’s feisty and headstrong but not without poise and charm. Sam Riley seems like an uncharismatic dud for Mr. Darcy, but there’s a suitable aloofness and sly wit to him, and the era-chameleonic Jack Huston finds the right amount of charisma and slipperiness as the duplicitous Mr. Wickham. The always-dignified Charles Dance brings class to Mr. Bennet; Sally Phillips is a hoot as the pushy Mrs. Bennet; and of the other Bennet sisters, the lovely Bella Heathcote (2012’s “Dark Shadows”) is really given the only chance to make any impression as Jane. Threatening to steal the whole show away from its leads, though, is Matt Smith (TV’s “Doctor Who”), a hilariously quirky standout as the pompous, mincing clergyman Parson Collins. The only disappointment in the cast is the inadequate use of Lena Headey. She sells the function-over-fashion eyepatch she has to wear, but her Lady Catherine de Bourgh, Mr. Darcy’s legendary aunt, ends up serving too insignificant of a part in the proceedings.

Amusing but still holding back, “Pride and Prejudice and Zombies” only occasionally breaks free as the tongue-in-cheek hoot it needed to be. Though it's understandable that Screen Gems and Lionsgate had to do their job and pull in the widest audience, the finished product is a bit neutered with a PG-13 rating. The slayings either take place off-camera or aren't always cleanly staged with a shaky shooting style and sometimes choppy editing, too, as if these were calculated moves to render the film’s gore more mild and palatable, but at least the sound design is plenty squishy. In any case, what writer-director Burr Steers and his committed cast ended up with will leave the book’s fans and this film version’s target demographic not minding zombies being added to every Western canon title. Jane Austen won’t roll over in her grave but might have actually gotten a kick out of this half-genteel, half-nutty diversion.