West to Midwest: “Take Me to the River” could be more fully formed but holds a quiet power 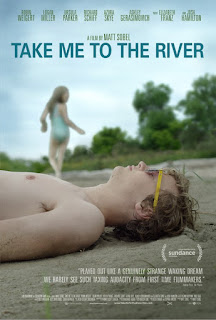 “Take Me to the River” is one of the strangest coming-of-age indies in quite a while, and that’s hardly a criticism. A strong feature debut from writer-director Matt Sobel, the film plays out with a quiet simplicity from a storytelling perspective but provides much to ponder about youthful curiosity and family secrets. Everything about the coming-of-age subgenre would seem to have been done already, but instead of feeling like Cliché City, it is honest and meditative, more like a “Mean Creek” than “The Way Way Back.” Sobel develops queasy tension within an estranged family dynamic through a naturalistic, understated visual style without actually building to anything. Even with a lot being left unsaid, it’s still powerful.

Openly gay California 17-year-old Ryder (Logan Miller) is about to arrive in Nebraska for a family reunion on his grandmother’s farm with parents Cindy (Robin Weigert) and Don (Richard Schiff). Cindy is something of a liberal black sheep in her family, having left the midwest for the west coast, so she tells her son not to make his sexuality a big deal. At the picnic, Ryder is comfortable enough in his own skin that he opts to wear his short red shorts and ‘80s-style sunglasses, despite being made the object of ridicule by his male cousins. Something much worse happens when Ryder goes off with precocious 9-year-old cousin Molly (Ursula Parker) and she comes out screaming with a spot of blood on her dress. Keith (Josh Hamilton), Molly’s father and Ryder’s uncle, is quick to react, instantly accusing his nephew of abusing his daughter and reopening a schism between Cindy’s immediate family and everyone else.

Where “Take Me to the River” goes from there is not obvious, only suggested, but it takes the viewer through an uncomfortable slice-of-Midwestern-life that aligns us with Ryder and the infuriating position in which he is placed. The performances are uniformly excellent, a restrained and relatable Logan Miller (2015’s “Scouts Guide to the Zombie Apocalypse”) leading the way as Ryder, whose confusion arises from the extended family around him and not his sexual identity. As Molly, Ursula Parker (TV’s “Louie”) could be shaping up to be one of the better child performers out there, as she seems to know exactly how to play a scene that’s intended to rely on ambiguity and discomfort. Robin Weigert finds nuances in her portrayal of Cindy, a mother who’s concerned but doesn’t want to make waves with her family. Josh Hamilton comes close to overplaying Keith as a redneck caricature, being a gun-happy conservative with a pick-up truck, but he’s even more intensely menacing when his character invites Ryder over for dinner.

Beautifully shot by cinematographer Thomas Scott Stanton, “Take Me to the River” captures the sweltering heat and pastoral tranquility in the country with cornfields and a nearby river. On a deeper level beyond the technical, the film is more ambiguous, feeling unfinished without as much payoff as there should be but thankfully resisting big reveals of the melodramatic persuasion. At once thoughtful and frustratingly vague, things are then left on a perfectly hopeful note with Queen and David Bowie’s “Under Pressure.” Having all the answers isn’t a must, especially when some relationships can never be healed.