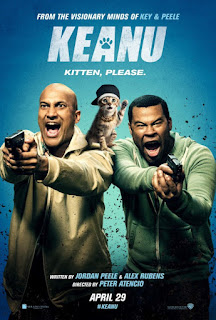 Keegan-Michael Key and Jordan Peele, the creators and faces of the Comedy Central sketch series “Key & Peele,” take their bread-and-butter comedic skills to their first feature film “Keanu” with mostly successful results. Director Peter Atencio and screenwriters Peele & Alex Rubens have enough experience honing this team’s brand of comedy on the small screen that the film’s rompish nature helps smooth over the stretch marks and occasionally slack pacing. If it doesn’t blaze on all cylinders as a consistently hilarious cult comedy, there are more highs than lows to convert those less familiar into fans and pave the way for an even better follow-up vehicle. Profane and ridiculous as hell but smarter than most mainstream comedies, “Keanu” is an action-comedy that you don’t see every day with one adorable kitten as its mascot.

Dumped by his girlfriend, Rell (Jordan Peele) is down in the dumps, laying about on the couch and getting high, until he finds a stray kitten at his L.A. door. He names the little bundle of fur Keanu and they instantly bond to the point that Rell stages and photographs little movie dioramas for a calendar. Two weeks later, Rell comes home to find his place ransacked and Keanu gone. With the help of straight-laced family-man cousin Clarence (Keegan-Michael Key), whose wife (Nia Long) and daughter are out of town on a camping trip, they must pose as street-tough gangsters and get mistaken for the shadowy, notoriously sadistic Allentown brothers. All they want is Keanu back, but they find themselves way in over their heads with drug dealer Cheddar (Method Man), his gang The Blips, and the actual Allentown brothers.

Brazenly loopy and sometimes inspired—even when its basic ordinary-friends-have-one-crazy-night concept reminds one superficially of “Harold & Kumar Go to White Castle” and “Pineapple Express”—“Keanu” can be sensed as the type of comedy that will trigger even more laughter out of the viewer with an audience who’s already in-tune with Key & Peele’s brand of racially subversive humor. Being acquainted with the headliners’ sketch-sized comedy work will certainly help but luckily isn’t a prerequisite, as Keegan-Michael Key and Jordan Peele have distinct delivery and both have an easy, engaging rapport. The so-stinkin’-cute Keanu is pretty much a MacGuffin to the plot, but he nearly steals the human actors’ thunder whenever he runs into frame and meows. (The cat wrangler deserves props.) Within the supporting cast, Tiffany Haddish is also a charismatic standout as Hi-C, one-fourth of Cheddar’s Blips.

In the hands of Key and Peele, “Keanu” plays with and challenges racial stereotypes in ways that are more clever and less lazy than anything the 2015 Will Ferrell-Kevin Hart comedy “Get Hard” tried to do. Their performances of convincing Cheddar and his gang with their hard, “n-word”-spouting personas, “Tectonic” and “Shark Tank,” is never not amusing and sometimes uproarious. Even as this fish-out-of-water scenario is played for laughs, there is still an element of real danger within the drug-dealing milieu; if this wasn't a comedy, Rell and Clarence would probably meet their maker by the end. In a bizarre, unpredictable sequence where Rell and Hi-C have a drop-off in a Hollywood Hills home and wait to collect, Anna Faris brings down the house as an aggressively coked-up, Samurai sword-swinging version of herself.

Like a lot of comedies today, “Keanu” probably could have undergone a trim to do away with the few times the energy stalls and the slim narrative tries to overextend itself. However, when it’s funny, it’s very funny. A running joke involving Clarence’s love for George Michael actually gets funnier as it’s repeated. As Clarence/“Shark Tank” listens to his playlist of George Michael on a stakeout in his minivan with Cheddar’s thugs, Bud (Jason Mitchell), Trunk (Darrell Britt-Gibson) and Stitches (Jamar Malachi Neighbors), and convinces them that the ‘80s English pop singer is actually cool, this film makes the most memorable use of “Faith” even after 2002’s “The Rules of Attraction.” There's also a darkly riotous sight gag involving Rell’s cornrowed, racially confused neighbor/dope dealer (Will Forte) and a python. As competently as one can, director Peter Atencio straddles the line between drugs, a little torture-chamber sadism, and a baby feline. The action is also slickly staged and violently over-the-top, knowingly aping “The Boondock Saints” in the film’s opening church-set massacre and “Bad Boys II” in the courtyard of a rival drug dealer’s mansion. And even when bullets are flying, bags of cocaine are exploding and a lot of time is spent in a seedy strip club, there’s still an underlying sweetness that proves infectious for Key & Peele's fans and cat lovers alike.