Good Times: Linklater’s “Everybody Wants Some!!” a fun, sweet slice-of-life and time capsule 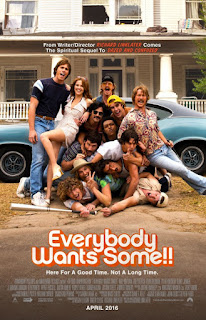 Conceived as a “spiritual sequel” to 1993’s wonderfully quotable stoner comedy “Dazed and Confused,” writer-director Richard Linklater’s (2014's "Boyhood") “Everybody Wants Some!!” does for ‘80s Texas college life what he did with that ’70s slice-of-life. It was the last day of high school then and it’s the weekend before the first day of college now. As much as it is a lovingly accurate time capsule and aimlessly about sex-crazed jocks chilling out, boozing it up, getting high, and cruising for chicks, there is a sweetness and wisdom that goes with the fun. Not too much deeper than a good time but more than a mere nostalgia trip, “Everybody Wants Some!!” is that rare, inviting party that you don’t want to see end.

It’s 1980 and a few days before classes start at a Texas college. Jake Bradford (Blake Jenner) is an incoming freshman and baseball pitcher about to live in a house of fellow ball players. He carries himself with a quiet confidence, but he’s a little intimidated by his new housemates. There are the cocky seniors, Roper (Ryan Guzman) and McReynolds (Tyler Hoechlin), and pompous pitcher Jay (Juston Street) who’s more of a joke than a legend, but there is the team’s only black player, Dale (J. Quinton Johnson), who shows Jake respect; a hippy-dippy, philosophical transfer Willoughby (Wyatt Russell); and Finn (Glen Powell), another philosophical guy who tries charming the ladies by talking about his “average penis.” As 1 of 4 freshmen, Jake does as the seniors do, sowing their wild oats at the local disco, then a country bar, then a punk rock show, and then later a party for theater and dance students. They also tool on each other before they even hit the locker room and the field for practice. Through all of this, Jake sets his eyes on Beverly (Zoey Deutch), a lovely theater major who actually picked him out of all the other guys first.

To call the film “plotless” or “low-stakes” wouldn’t be incorrect, but “Everybody Wants Some!!” is a microcosm of a young adult experiencing freedom away from home, and Richard Linklater encapsulates this pivotal transitional period perfectly. With loose-limbed energy and naturally funny repartee, he knows how to make a shaggy narrative look effortless, breezy and elegant as a Robert Altman mosaic. Not only named after Van Halen’s rock anthem, the film is peppered with eclectic but pitch-perfect musical samplings, including The Knack’s “My Sharona,” Blondie’s “Heart of Glass,” The Sugar Hill Gang’s “Rapper’s Delight” and Devo’s “Whip It.” Also, the period details are affectionately recreated to a fare-thee-well without feeling like a wink-and-nudge spoof. Linklater even gets the porn-star mustaches right (in an amusing touch, the seniors rip on one of the freshmen who can only grow peach fuzz).

Similar to how Matthew McConaughey, Ben Affleck, Parker Posey, and others first began as unknowns in “Dazed and Confused,” the ensemble here is a fresh-faced, undeniably talented one; most likely after this launching pad, we’ll be seeing a lot more of them. At the center as Jake, Blake Jenner (who broke out as a series regular on the fourth and fifth season of TV’s “Glee”) has an affable, boyish appeal about him. He’s identifiable as a soul-searching kind of guy who doesn’t have all the answers but has just enough spark without being a bland conduit. As the Matthew McConaughey/Wooderson figure, a stache-rocking Glen Powell (a hilarious scene-stealer on TV’s “Scream Queens”) gives a star performance as Finn, who’s not written as a stereotypical jock but endearing, open-minded and literate enough to be reading Jack Kerouac while puffing on a pipe. Wyatt Russell (son of Goldie Hawn and Kurt Russell) has an easy-going presence as the stoner on the team who curates his collection of “Twilight Zone” epsidoes. Tyler Hoechlin (MTV’s “Teen Wolf”) looks like he time warped back from the ‘80s as Willoughby, the ultimate alpha-bro as senior team captain McReynolds who can be a bad loser when Jake beats him at ping-pong. As the film’s only well-rounded female character that isn’t mud-wrestling eye-candy, Zoey Deutch (2016’s “Dirty Grandpa”) is adorable, radiant and down-to-earth as Beverly, and her likeness to Lea Thompson is no coincidence; Deutch is Thompson’s daughter. Everyone has a great face that fits the period and no one with a speaking part is left untested.

Excelling with young actors who get what Linklater was going for and just great writing, the characters would probably hang out in the same circle as the guys in 1979’s “Meatballs” and 1982’s “Porky’s” but rarely ever come off as just jerks. Idling with characters who are likable and interesting without a formal, guiding plot is not like shooting fish in a barrel, but it’s in Linklater’s wheelhouse to open up and understand his characters and break down stereotypical molds. Funny, honest, good-natured, surprising, purely diverting and seamlessly of a piece with “Dazed and Confused” in its laid-back vibe, “Everybody Wants Some!!” is special enough to become a touchstone in the coming-of-age comedy genre. You’ll want some more, all right.