Happy Horror: "Holidays" too wildly uneven to be cause for celebration 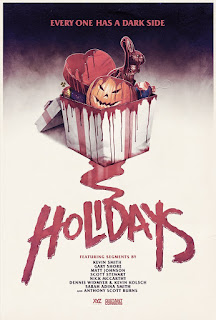 As of late, horror anthologies have been all the rage, and it’s no wonder why. This particular format for the genre can be fun and exciting to see how far a filmmaker’s creative juices can flow in short bursts. However, when the conception and cover art of a film are better than the finished product, it is a crushing disappointment. Such is the case with “Holidays,” a grab-bag of eight short horror films that take on different holidays in the chronological order of a calendar year, each demented little exercise ending with a greeting card revealing the individual holiday and the writer-director. On a segment-to-segment basis, it is going to be a roll of the dice with a collection of films made by different creative voices—there’s no way around that—but “Holidays” still can’t quite hack it as a whole.

“Valentine’s Day” comes out of the gate first from writer-directors Kevin Kolsch and Dennis Widmyer, whose debut “Starry Eyes” was one of 2014’s most unshakable films. It’s all very “Carrie” as teenage misfit Maxine (Madeleine Coghlan) gets bullied by her catty classmates, particularly queen bee Heidi (Savannah Kennick) who cruelly dubs her “Maxi-Pad.” She crushes on her dreamy swim coach (Rick Peters), who’s in need of a heart transplant, and will do anything to get her feelings requited. The brightly hued fantasy elements, synthesizer musical beats, and a red baseball cap worn by one of the mean girls like P.J. Soles would slap a smile on Brian De Palma’s face. Everyone acts in such broad, go-for-broke fashion, bordering on obnoxious, but the story's morbidly romantic, if rather obvious, conclusion still packs a nasty punch. In “St. Patrick’s Day,” writer-director Gary Shore (2014’s “Dracula Untold”) inventively eschews evil leprechauns for a pagan folktale. When schoolteacher Elizabeth (Ruth Bradley) finally gets her wish to get pregnant, the outcome is best described by her doctor, “It’s like ‘Rosemary’s Reptile.’” Shore’s tale is a freaky, darkly absurd original, and it somehow works in a particularly iconic “Grease” character.

The first story to actually frighten is “Easter,” written and directed by Nicholas McCarthy (2014’s “At the Devil’s Door”), in which an inquisitive little girl (Ava Acres) questions her mother why Easter is actually celebrated and then paid a visit by the big bunny. After an amusing beginning—Mom unintentionally scares her daughter by saying Jesus comes back from the dead on Easter—this yarn becomes a child’s nightmare with one effectively spun jump scare, gnarly creature make-up, and a bold and bleak capper. Sarah Adina Smith’s (2014’s “The Midnight Swim”) “Mother’s Day,” the fourth segment and the second one to be about a bizarro pregnancy, goes nowhere fast, but the premise at least intrigues. 24-year-old Kate (Sophie Traub) becomes pregnant every time she has sex. When she’s referred to a fertility ceremony in the desert, well…where it goes from there amounts to a “That’s it?” ending. Luckily, Anthony Scott Burns (a visual effects artist) comes in as scribe and helmer to “Father’s Day” and allows his contribution to be at the top of the heap. It follows Carol (Joceilin Donahue), as she receives a tape from her father (Michael Gross) whom she believed to be dead and is then guided by his disembodied voice. Burns creates a haunting atmosphere from start to finish, and it’s the kind of short film that feels more like a resonant effort than something tossed off. To read the rest of the review, go to Diabolique Magazine.