The Paranoid Hills: Expertly tense "The Invitation" simmers and then explodes with disquiet 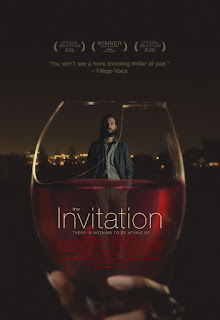 Not knowing a thing about “The Invitation” ahead of time really does enrich the impact of this hypnotic, ominously suggestive and tensely coiled slow-cooker of a dramatic thriller. With simmering tension, disquiet and characters that matter, director Karyn Kusama (2009’s unjustly unloved “Jennifer’s Body”) and screenwriters Phil Hay (Kusama's husband) & Matt Manfredi (2014’s “Ride Along”) are willing to take the normalcy of a dinner party and flip it on its head into unsafe, plausibly terrifying directions. Flowing with suspicion, paranoia, grief and psychological projection, the film pulls viewers into an unnerving spell of foreboding, where one almost forgets to breathe, and then lingers long after.

Will (Logan Marshall-Green) and girlfriend Kira (Emayatzy Corinealdi) are invited to a dinner party—a long-overdue reunion of sorts—in the Hollywood Hills held by his ex-wife, Eden (Tammy Blanchard), and her new husband, David (Michiel Huisman). Will is not only hesitant to see Eden and David, who both have recently returned from a two-year head-clearing in Mexico, but to be back in his old midcentury modern home haunted by memories before a painful tragedy. Will reconnects with old friends, including couple Tommy (Mike Doyle) and Miguel (Jordi Vilasuso), Ben (Jay Larson), Claire (Marieh Delfino) and Gina (Michelle Krusiec), while they wait for Gina’s always-late boyfriend Choi (Karl Yune). Everyone is estranged, but with the uncorking of expensive bottles of wine, they loosen up and act more civil than Will, who notices something is amiss. A few surprise guests soon pop up as well, like the hosts’ friends, the spacey Sadie (Lindsay Burdge) and the mysterious Pruitt (John Carroll Lynch), whom they met in Mexico. As the night goes on, Will becomes more and more suspicious about what the soiree is all about, and for good reason.

Working from Phil Hay & Matt Manfredi’s compelling, concise script, director Karyn Kusama expertly lays out the pieces and tightens the screws with care and efficiency, all while twisting her audience's expectations and giving them a queasy feeling in the pit of their stomachs. Before Will and Kira even arrive at Eden and David’s, they encounter a bad omen. David hits a coyote and he must put it out of its misery with a tire iron. Then the first time Will sees Eden, whom he once shared a life with in that very same house, she is all-smiles, wearing a hippy-dippy, flowing white dress and looking as if she’s on cloud nine. He also asks to walk around the house, noticing how much remodeling Eden and David have done. When David has them all sitting (even though everyone still wonders where Choi could be), he decides to show them a video that they all initially take as a cult-y recruitment video.

Strongly acted by a troupe of recognizable character actors who rarely get their due, the film is an exceptional example of actors getting more than enough room to play in what is decidedly an ensemble piece. Will might not be completely together and understandably so, as the viewer comes to understand his past with Eden. Damaged yet sympathetic, Logan Marshall-Green acts as the audience’s eyes and ears, and his new and healthy relationship with Emayatzy Corinealdi’s Kira is conveyed with lovely little nuances. As Eden, Tammy Blanchard forms a complete person who thinks she has found her own way to process her grief and that someone has a bigger plan for her. As Pruitt, who shocks everyone he’s just met for the first time with a dark, personal story about his marriage, John Carroll Lynch manages to balance between mild-mannered and possibly threatening. Everyone else, too, is granted standout character moments.

Whether taken as an evocative metaphor for a grief-stricken emotional breakdown or just a really masterfully constructed thriller, “The Invitation” is affecting on multiple levels. Director Kusama employs a couple of tropes (the characters have poor cell phone service in the Hills and Will is reeling from emotional pain, seen through stream-of-consciousness flashbacks) that would seem mustier in a less confidently executed film. It also wouldn’t be what it is without Theodore Shapiro’s indelibly creepy score, the elegantly moody cinematography by Bobby Shore that alternates between a dimly lit coziness and menace, and alarmingly sharp sound design. Where the final twenty minutes go are hair-raising and nervously unforeseen, and then the closing image and the implication that comes with it are unforgettably chilling. “The Invitation” certainly deserves a seat at the table of thrillers made by Polanski and Hitchcock.