Art as a Family: “Family Fang” an odd duck that still manages to be affecting 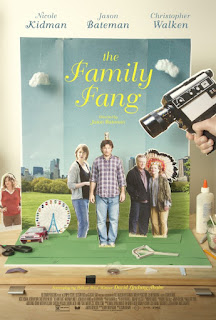 Finding a slightly better project to be his second time both in front of and behind the camera after 2014’s often caustically funny but uneven “Bad Words,” actor and director Jason Bateman finds a strange family unit at the center of “The Family Fang.” Adapted from Kevin Wilson’s 2011 novel by screenwriter David Lindsay-Abaire (the 2015 “Poltergeist” remake), the film is bittersweet and unusual enough to carve out a niche for itself in the annals of dysfunctional-family indies. Droll but emotionally vivid without becoming a funeral dirge, “The Family Fang” finds an original avenue into dark familial issues by examining the emotional costs on the adult children of avant-garde artists who test their relationship for their art form.

In the 1970s and ‘80s, Caleb (Jason Butler Harner) and Camille Fang (Kathryn Hahn) made their two children part of their public performance art pieces, whether it be pretending to rob a bank or shocking passersby in the park with an inappropriate punk song. In the present day, the damaged Fang children who were once referred to as “Child A” and “Child B” are now both stagnant in their careers — Annie (Nicole Kidman) is an alcoholic actress faced with being in the tabloids for giving in to do a surprise nude scene and Baxter (Jason Bateman) is a novelist struggling over his third book. After Baxter is hospitalized from an accident, he reconnects with Annie and his parents (Christopher Walken, Maryann Plunkett) in their childhood home. When Caleb and Camille leave their kids to take a spontaneous trip after an argument, the police find the Fangs’ car with the signs of a struggle and blood spattered across the dashboard. Annie knows it has to be another one of their parents’ art pranks—perhaps their magnum opus—but Baxter isn’t so sure.

“The Family Fang” shows Annie as an adult in a scene out of context that director Jason Bateman later returns to in the middle of the story. Even if it were there to add suspense to the storytelling, this in media res framework is an odd and unnecessary choice that adds nothing and could have easily been fixed for the finished cut. Otherwise, the Fang family’s prankish art pieces in flashback provide eyebrow-raising and light chuckles, and there is a nifty touch that blurs the line between fiction and reality involving critics debating over whether or not the Fangs’ work is profound art or hooey. The character observations are more than interesting to make up for the aforementioned out-of-sequence device, and piecing together the clues that will point to Annie and Baxter’s parents’ whereabouts is also worth the investment.

Jason Bateman, who specializes in cynical, deadpan quips, keeps proving his capabilities of reaching emotional depth, particularly here as the wounded Baxter. He believably creates a strangely close sibling bond with Nicole Kidman, who’s excellent as Annie. Both of their characters receive emotional releases, but they’re acted and depicted on screen as small, low-key victories. Christopher Walken and Maryann Plunkett also forgo one-dimensional weirdness and leave poignant marks as the respectively self-involved and warm artist parents who hold a big secret over their kids’ heads.

Boiling down to a third-act secret, “The Family Fang” is a journey paved with a few surprising revelations to overturn the familiarity of estranged siblings coming together and reflecting over their childhood memories. Even with the offbeat premise feeling like it wouldn’t be true to life and thus resonate, the film is never indebted by a quirky Sundance movie checklist and makes sure the emotions always feel uncomfortably authentic. Bateman’s execution of such tricky, seriocomic material is not always tonally sound, but he gets affecting performances out of his high-profile cast, including himself. This is definitely not cookie-cutter nor is it a sophomore slump, leaving one curious to see what he does next as a filmmaker.