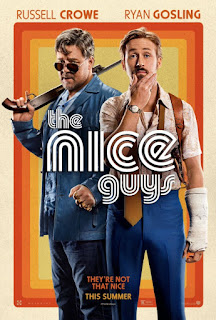 When thinking about some of the most surefire pairings in buddy-cop comedies, one probably wouldn’t believe that he or she would one day see Russell Crowe and Ryan Gosling together. It’s so unlikely that maybe that’s one of the reasons why their partnership works so well in “The Nice Guys.” With its title decidedly a misnomer, the film offers “Lethal Weapon” screenwriter Shane Black’s special cocktail of violence and odd-couple humor as his third outing behind the camera following 2005’s “Kiss Kiss Bang Bang” and then 2013’s “Iron Man 3.” Already well into the early-summer movie season with every offering either being a sequel or connective tissue in some superhero universe, this deliciously retro noir comedy is like watching a blast from the past, a refreshingly adult-minded, deservedly R-rated pleasure that's almost guaranteed to be a very fun sleeper surprise.

In the same key as “Kiss Kiss Bang Bang,” “The Nice Guys” is snappily co-written by director Shane Black and writer Anthony Bagarozzi. There is a kind of rat-a-tat humor between these characters, as well as an ample amount of screwball bumbling on Holland March’s part that is staged like a ballet. March is a functioning mess and a low-rent detective who’s practically a con artist when he charges a woman who asks him to find her husband whose ashes already sit in an urn on her mantle. Healy is more of an enforcer who might have a questionable moral code, but he’s very honorable when it comes to him seeing a predator preying on a young girl. The plot is persuasive enough, but even if one just tunes out the noir convolutions of who is with who and who wants the film-reel McGuffin, the film prospers most through the stars’ dynamite chemistry when mouthing Black’s energetic dialogue that never feels effortful. 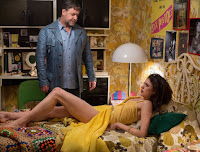 Perhaps the right comedic scripts haven’t come his way before, but Ryan Gosling has never been given the chance to really be funny before. Sure, he made a charismatic pick-up artist in “Crazy, Stupid, Love.” and stole laughs with a housing bubble ready to pop in “The Big Short,” though, as Holland March, Gosling displays a limber flair for comedy in ways both physical and slyly verbal. With that said, Russell Crowe, who’s not exactly associated with comedy either, is the right foil with a face and ability for deadpan. 15-year-old Australian newcomer Angourie Rice is a breakout phenom as March’s grown-up, compassionate daughter Holly. Frequently stealing a scene from her far more experienced screen partners, she is not only excellent in the role but also well-used, being given actual business to do as a character and becoming March and Healy’s sort-of Nancy Drew who even ventures into the most inappropriate places for a teenage girl. Holly could have easily become a helpless child in peril and nothing more, but that never happens, and Rice ensures that she is definitely someone to keep an eye on. In keeping up with the against-type vibe, Matt Bomer is believably vicious as hit man John-Boy, named for sharing the same mole as actor Richard Thomas on “The Waltons.” Finally, Kim Basinger reappears with Crowe for an “L.A. Confidential” reunion and sells all two of her scenes.

From the not-yet-restored Hollywood sign to the radio smog alerts to a “Jaws 2” billboard and The Comedy Store, “The Nice Guys” is so steeped in groovy, lived-in ‘70s details without veering into parody. There’s no room for complaints on a visual or aural level, that’s for sure, with aces era-specific production design and costumes coordinated well with music by Kool & The Gang, Earth Wind & Fire, and The Temptations. Beyond those pleasures, it is a veritable testament to Shane Black’s sharp script that lands the laughs even when an innocent person is gratuitously caught in the line of fire as collateral damage. The pace also rarely lets up, right down to the climax that is madcap chaos cleverly conceived at the L.A. auto show. Loose, witty and often wickedly hilarious—and even just plain wicked—“The Nice Guys” makes no apologies for wanting to give audiences a good time. If this is the start of a franchise, count me in.