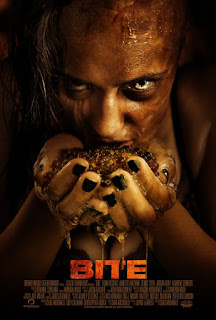 Canadian director Chad Archibald has kept himself very busy, churning out two low-budget features in 2015 and not about to stop. The problems with “Ejecta” and “The Drownsman” were more at a script level than anything in the technical sense, but it is imperative that what has been written on the page doesn’t derail before actually going before the cameras. Now, on to his third directorial effort in the horror arena, Archibald goes the gross-out route. Part travel horror story, part marriage-anxiety drama, part transformative body horror yarn, “Bite” is a commendably disgusting monstrosity of pus, bodily fluids and eggs that’s startling in its goopy, squishy ickiness. One certainly can't say the makers didn't achieve what they set out to do.

Casey Morgan (Elma Begovic) vacations in Costa Rica with her two best friends, Kirsten (Denise Yuen) and Jill (Annette Wozniak), for her bachelorette party. At first, it’s fun and drinks, but a drunken one-night-stand and a seemingly ordinary bite from an insect in a lagoon end the trip on a bum note. When returning home with regrets, her engagement ring missing, and the surprise gift of an antique baby high chair from workaholic fiancée Jared (Jordan Gray), she begins having cold feet. Her landlord and future mother-in-law (Lawrene Denkers) is already a strict, unpleasant old maid and bugs Casey about not handling her wedding preparations sooner. Casey decides that she needs to postpone the wedding, but before she has a chance to tell Jared, her bug bite gets worse. Her senses heighten. She loses her appetite and begins feeling nauseous. And to think the eventual metamorphosis was all from a little bite.

Sharing the same bloodline not only with 1986’s David Cronenberg-directed ‘The Fly” but even 2013’s underseen horror indie “Contracted,” “Bite” is nothing if not loud and proud about its own gooey grossness. As a horror filmmaker working on a shoestring budget, Chad Archibald doesn’t try for jump scares but consistently tests that the viewer’s gag reflex is in working order. He even deceives the viewer before the title card with one of Casey’s girlfriends documenting their exotic trip, leading us to think the rest of the film will be shot in found-footage form. Luckily, it’s not, but it goes to show what an economic shorthand the aesthetic can be when it’s sparingly used. The two-tier script by Jayme Laforest is a clever metaphor, paralleling Casey’s bite with the festering doubts concerning her looming marriage and having children. An indelibly cringe-inducing dream sequence of Casey waking up to her friends surprising her with a baby shower one-ups the urination-on-the-floor scene in “The Exorcist.” To read the rest of the review, go to Diabolique Magazine.